First thing Friday morning, like clockwork, the right-wing spin machine will go into overdrive with an update of a graphic (see immediately below) from the Obama team's (Romer & Bernstein) January forecasts regarding the projected unemployment rate with and without the stimulus package (and what has "really" happened). It is cited far and wide on nonfarm payrolls day (just watch Sean Hannity) as an example of Team Obama's incompetence and/or failed stimulus. I hereby call bullshit, for the simple reason that the Bush team's economic forecasts (see Table 1-1 below) make Team Obama look like a bunch of geniuses. 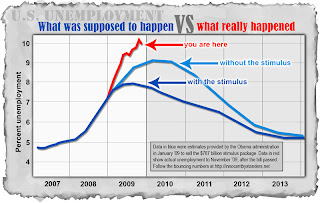 To those who are so inclined, you might want to point the right wingers to the following table, which comes straight out of the February 2008 (month three of the recession) Economic Report of the President, and turned out to be pure fantasy (e.g. "In 2009 and 2010 real GDP growth is projected at 3 percent, thereafter slowing, while the unemployment rate is projected to remain stable and below 5 percent in the 2009–10 period."): 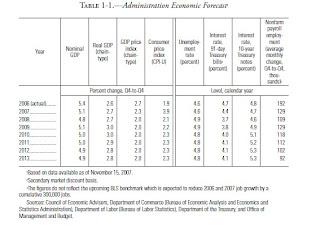 The Bush team's forecasts on GDP, the unemployment rate, and nonfarm payrolls (to cite what's truly important) are so laughably off the mark one has to wonder what -- if any -- modelling they were doing (e.g. a 4.8 percent unemployment rate in 2010, adding 1.3 million jobs in 2008 and another 1.5 million in 2009?). Further, a more realistic assessment in early 2008 could have provided our "leaders" (there's a joke) with a better roadmap to navigate the downturn. These forecasts should be categorized under "Those Who Live in Glass Houses."

Enough of the absurd partisan idiocy. It's petty and counter productive. Those who want to make hay with the Romer/Bernstein forecasts -- which they will, just wait until Friday -- first need to explain the hideously pathetic forecasts put forth by Team Bush. Feel free to drop explanations for Table 1-1 (above) in comments. So by all means, bring it. Otherwise, just STFU. Seriously.