Revisionist History and the Housing Bubble

Following Ben Bernanke's speech discussing the role that a lack of regulation played in the creation of the housing bubble versus the conventional wisdom that the Fed's low interest rates caused the bubble (a position of Bernanke's that I agree with), I wanted to delve a little deeper into this topic and show just why blaming the low interest rates for the housing problem is not only wrong, but a revisionist history.

First, we must recognize when the housing bubble actually began. This is important because bubbles need to be stopped early in their creation in order to be able to eliminate potential draconian economic side effects of popping a bubble that is already in its blow off top phase. This graph of housing prices clearly indicates that the housing bubble really began in the mid-late 90's when housing decoupled from inflation in a meaningful way.

Sure, the acceleration in prices didn't reach its peak until the 2004-2006 period, but by then any popping of the bubble would have had (as we now know) severe economic consequences and thus the fed would have needed to act much sooner in the process to minimize economic pain (remembering that acting to reduce home prices/appreciation wouldn't have been exactly a popular move).

Next, we need to examine the issue of subprime lending as a cause of the housing bubble. The following graph details both the cash volume and percent of originations that were subprime by year. 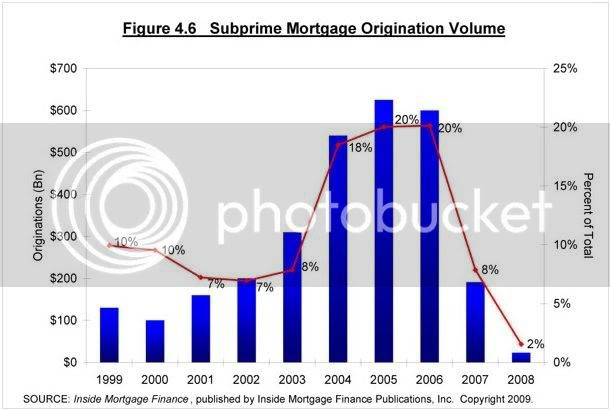 As you can clearly see, subprime didn't go nuts until 2004, which was the beginning of the blow off top and really only occurred about a year before we hit peak pricing. This would have left the Fed with very little time to act prior to the bubble bursting on its own and again, due to price appreciation having run wild prior to that already, would have made the Fed look like it was taking punitive action home-owning America.

Now, let's get on to the crux of the issue, which is the Fed's 1% interest rate that supposedly caused the housing bubble to corrupt our economy. The graph below shows the fed funds rate versus the 10-year treasury yield (which is important since many loans are tied to the 10-year). 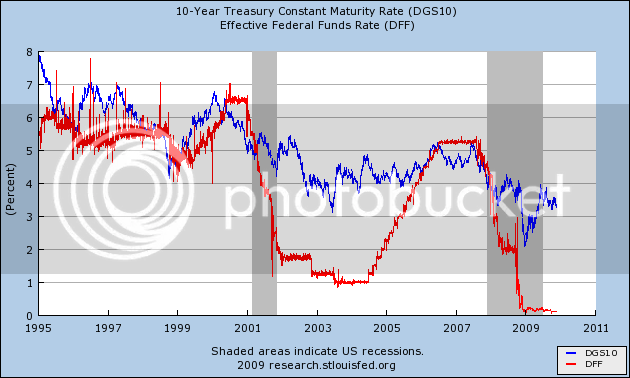 The graph clearly shows that the 10-year yield didn't move up even when the fed rapidly increased rates beginning in 2004 (again, right before the bubble peak), which implies strongly that something else was keeping interest rates low besides the Fed (maybe it was our huge trade deficit?). So, the idea that the Fed's low interest rates caused the housing bubble by keeping mortgage rates too low seems less than accurate, especially when one also considers that the housing bubble began in the mid-late 90's interest rates were still well in excess of 7.5% (for a 30 year mortgage).

Another argument that has seemed to gain steam is that somehow the Fed's low interest rate policy of the 2001-2004 period forced investors to seek high yields, which then directly lead to the blow off in the housing bubble. This is again leaves out the regulation bit, since the ratings agencies should have prevented the sub-prime securitizations from being tagged AAA and again gets us back to the yield on the 10 year, which was quite stable even after the Fed raised rates in 2004. It seems to me like the much bigger problem was that we had a world awash in dollars from our consumer spending that had to go somewhere and they ended up in treasuries. And finally, it shouldn't be the job of the Fed to give bond funds investment options.

Finally, all this revisionist thinking completely ignores the fact that the US economy was in a recession/jobless recovery during this period of low interest rates and that tightening at the time would have lead to a much deeper recession that would have been blamed (rightly so) on the Fed (much like the 1982 recession). Going after house prices during the recession would have been politically impossible at a time when there was no job creation, stocks had just fallen sharply, and overall inflation was still low. To top all of that, it may not have had an effect anyways since even when the Fed did tighten, longer term rates stayed low. May this serve as a reminder to those calling for interest rate hikes now, you may be right in the long term, but the Fed has shown that it will choose growth over potential down the road inflation/bubbles.
Posted by SilverOz at 1:00:00 PM