As most of you know, my analysis is geared towards when will the economy start to add back jobs? It may have been last month.

With yesterday's release of December auto sales and ICSC same store sales, we have enough to make a rough guess of December real retail sales, which I have described as the "Holy Grail" leading indicator for job growth.

Auto sales were up ~3% from November to 11.25 Million annualized (and the best showing since Black September 2008). Here's the graph (h/t Calculated Risk): 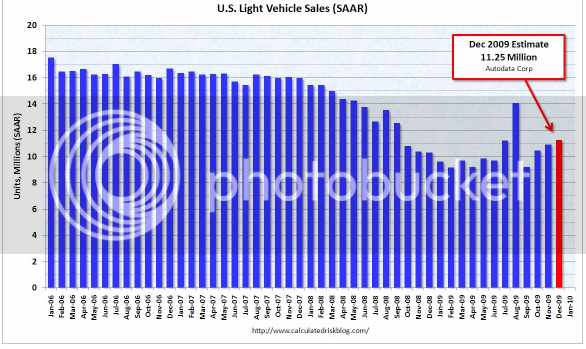 Meanwhile, the ICSC reported sales the week after Christmas up 1.5% WoW and 2.5% YoY. December is probably going to be up about 0.6% from November and about 2.0% YoY. Here's a graph of both WoW and YoY same store sales for 2009 (h/t Retail Sails): 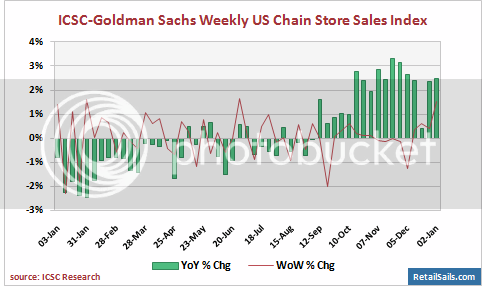 Auto sales constitute about 1/4 of all retail sales. That gives us a weighted average of about +1.2%. I'm going to knock that number down by 1/2 to 0.6% because increases in auto sales recently haven't directly translated into the equivalent increase in the official retail sales number. Subtract 0.2% for estimated December inflation, and you get a Real Retail Sales increase of +0.4%. That's about +2.2% from the April smoothed bottom, or about a 3.3% annualized rate. Now, that's just a back-of-the-envelope guesstimate, so simply figure it is going to be a decent positive number.

Together with Monday's good ISM manufacturing data, which probably presages a decent increase in Industrial Production in December, and all of the ingredients (with the possible exception of the ISM non-manufacturing report) appear to have come together for an actual positive jobs report.
Posted by New Deal democrat at 10:00:00 AM