One of the greatest themes around the economic blogsphere is the government is manipulating the numbers to make things look better than they are. However, this is an easily debunked claim.

The latest source for this claim is a story from the New York Times. Here are the first three paragraphs from that story:

A widening gap between data and reality is distorting the government’s picture of the country’s economic health, overstating growth and productivity in ways that could affect the political debate on issues like trade, wages and job creation.

The shortcomings of the data-gathering system came through loud and clear here Friday and Saturday at a first-of-its-kind gathering of economists from academia and government determined to come up with a more accurate statistical picture.

The fundamental shortcoming is in the way imports are accounted for. A carburetor bought for $50 in China as a component of an American-made car, for example, more often than not shows up in the statistics as if it were the American-made version valued at, say, $100. The failure to distinguish adequately between what is made in America and what is made abroad falsely inflates the gross domestic product, which sums up all value added within the country.

Let's look at the third paragraph in detail, especially the opening sentence. "The fundamental shortcoming is in the way imports are accounted for." So, the issue is not with an entire group of statistics but with the way we count imports. The net effect of this problem?

The statistical distortions can be significant. At worst, the gross domestic product would have risen at only a 3.3 percent annual rate in the third quarter instead of the 3.5 percent actually reported, according to some experts at the conference. The same gap applies to productivity. And the spread is growing as imports do.

Then there is "Shadowstats." . Many people cite them as proof positive the US government is distorting the data. For example, here is a chart of their CPI calculation.

However, there is a big problem with claiming the blue line is the correct measurement of inflation. It comes in the form of bond yields: 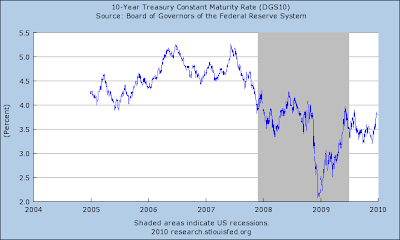 If the blue line on the shadowstats graph were the correct inflation measure, bond yields would be at least 400 basis points higher. Why? If shadow stats were correct, then bond investors would have been losing money for most of the 2001-2008 period because inflation was higher than the stated interest rate on the 10-year Treasury bond. Simply put, investors would not put up with that and instead would have sent yields far higher for the last decade. Yet they did not. That tells us that Shadow stats CPI number is wrong.

And if there was a grand conspiracy regarding US economic statistics, where are the academic papers specifically showing why certain numbers are wrong? For example, go the National Bureau of Economic Research and the social science research network. Then search both for "birth/death model." According to literally the entire economic blogsphere this statistical adjustment to the establishment job numbers is an abomination (Except A Dash of Insight who explains why the criticism is unwarranted here, here and here.) Yet there are no papers from academics on why this number is wrong. Type in "US import prices" and you get the same thing -- nothing. Simply put, there is no huge outcry from the people who should be doing that -- academics.

In summation, we have the following points:

1.) The New York Times story that supposedly shows a massive conspiracy regarding government statistics has been taken massively out of context.

2.) Shadow Stats is bunk, plain and simple. Or to quote professor Jim Hamilton:

Why do people continue to give credibility to an operation like Shadowstats? Now that's something that I'd like to hear explained.

3.) The people who should be publishing papers showing the massive distortions in US government numbers aren't publishing those papers.

In short, the claim the numbers are cooked is great for headlines to drive traffic to your site, but that's about it.
Posted by Unknown at 9:00:00 AM