I hope everybody had a safe new years eve. Let's start out the new year with a look back at all the indexes starting with the NASDAQ.

There are two trend lines for the QQQQs. A -- which the index broke in September and B which is still good. However, also note the declining volume for the rally (C). This is very important because it tells us that people are less and less excited about the market.

However, consider this longer term chart (which you will have to click to see the point):

Above is a chart that highlights the QQQQs daily volume over the last 6 years. I have drawn a red line from the lower points in November and December of this year going backwards. Notice how the low point in this rally's volume is consistent with volume prints from 2004 and 2005. In other words, you could argue that from a volume perspective we're returning to normal.

A.) Momentum has been decreasing since August, although the MACD moved through the trend line recently.

B.) Note that for the last 4 months we haven't seen a big move into or out of the market -- the overall A/D line has been in a very narrow range. 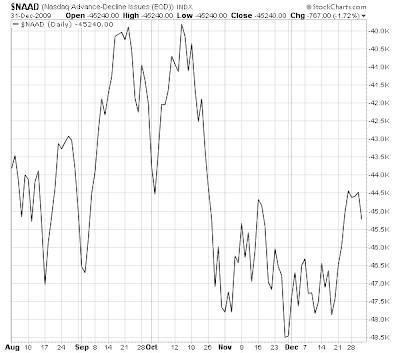 The A/D line dropped in October and has stalled since then. But 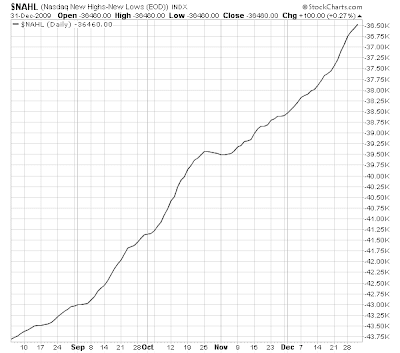 The good: there is still an uptrend in place and the EMA picture is bullish.

The neutral: while the MACD has broken through resistance, we need a bit more time for the trend to be real. In addition, we have a neutral Accumulation/Distribution line. The advance/decline line is borderline neutral bad.

The bad: declining volume for the entire year. However, we could also look at this as a return to more normal volume prints if we compare the volume.
Posted by Unknown at 5:00:00 AM