The impact of the Fed's "taper" on longer term bonds has been one of the big events of the last three months. It is well known that bonds tend to serve as a long leading indicator for the economy (think of it as the "price of money"), but there are several different ways to look at bond yields: (1) whether they are rising or falling; (2) their "real" rates, i.e., their relationship to inflation; and (3) the yield curve, which is the relationship between shorter term and longer term bonds. Depending on how you look at bonds, the story is quite different.

First, let's look at what the back-up in long term rates is showing us. The following is the YoY graph of long term rates, showing that they have increased by over 1%: 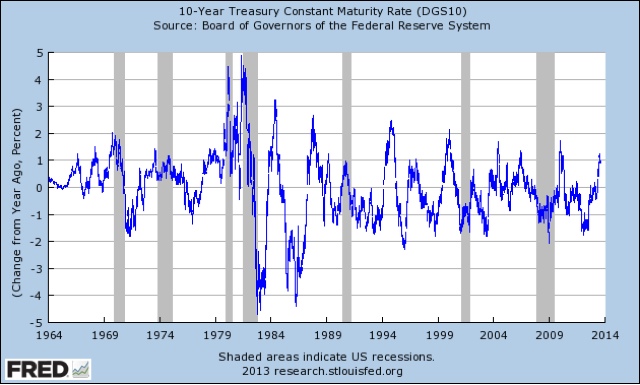 As I have previously pointed out, since WW2, an increase of 1% in long rates has been necessary, but not sufficient to indicate that a recession is coming within the next 12 months.

A second way to look at interest rates is to gauge then vs. inflation, i.e., what is the "real" price of money? The theory is that the economy slows down when "the price of money" gets more expensive. Let's take a look, using long rates: 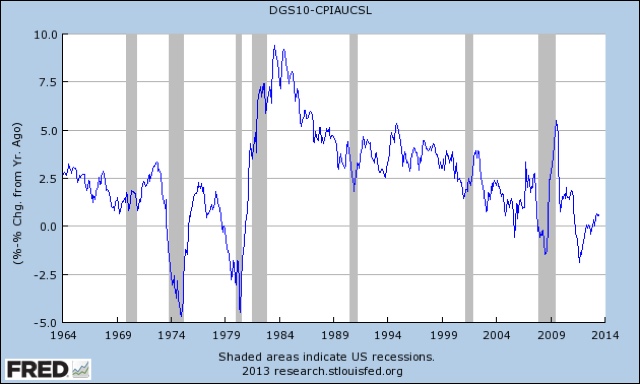 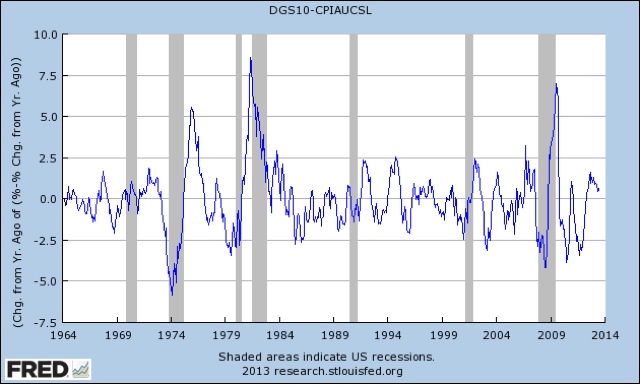 "Real' long interest rates have almost always turned negative before a recession, at least in the post-WW2 period. But there are far too many false recessionary signals to make this measure worthwhile, except perhaps as a negative for recession if the measure has been positve for the last 2 years up until the present. 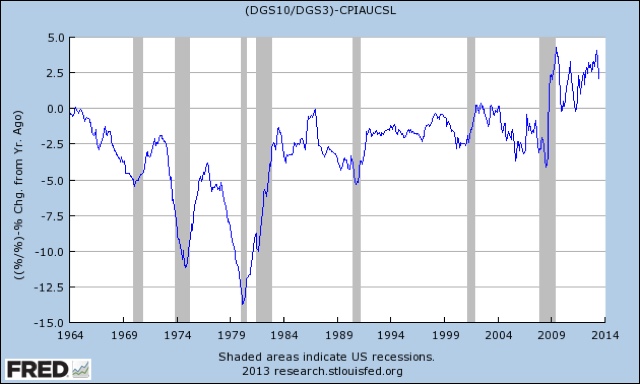 Once again, the actual "price of money" is less predictive than the directional move. Here's the same information, but plotted as the YoY change: 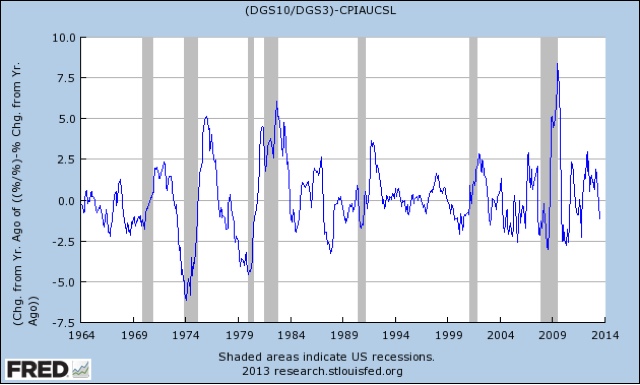 This is more interesting. Almost always, within 12 months before a recession, the average of long and short "real" rates is negative by at least 1%, although there are a few false positives. Note that by this measure, as opposed to just long term rates, the recession signal is on - but it has also been on twice before since the 2008-09 recession without any new downturn.

Finally, let's look at the yield curve. It has a nearly impeccable recond of corresponding to recessions approximately 12 months later since WW2, having only one false positive in 1966: 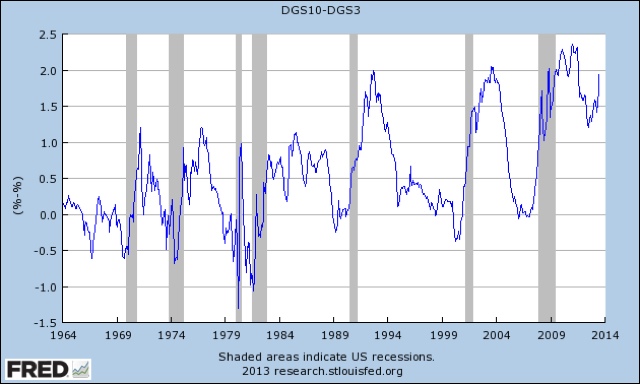 I used to swear by the yield curve as a long leading indicator. I approach it with more caution now. In particiluar, while an inverted yield curve is always a bad thing, and an inverted curve in the presence of deflation is what I dubbed the Death Star, since it has occurred twice in the last 90 years (in 1928 and 2006); the yield curve remained positively sloped from the end of 1929 throughout the entire Great Depression, and was normally sloped from early 2007 on, giving no warning at all of the late 2008 calamity.

In any event, if you are following the yield curve, then its steepening is regarded as a good sign of a strengthening economy. If the economy is going to remain in inflation, I agree with you. If it is verging on deflation, in my opinion all bets based on the yield curve are off.

So I do not think the inflationary regime applies. Hence my focus on whether the middle and working class can continue to refinance debt at lower rates, and how wages are behaving relative to prices. In short, I am paying more attention to the first measure than to the yield curve.
Posted by New Deal democrat at 10:30:00 AM