Investors are favoring U.S. stocks over emerging markets by the most ever as fund flows and volatility measures show institutions are increasingly seeking the relative safety of American equities.

Almost $95 billion was poured into exchange-traded funds of American shares this year, while developing-nation ETFs saw withdrawals of $8.4 billion, according to data compiled by Bloomberg. The Standard & Poor’s 500 Index (SPX) trades at 16 times profit, 70 percent more than the MSCI Emerging Markets Index. A measure of historical price swings indicates the U.S. market is the calmest in more than six years compared with shares from China, Brazil, India and Russia.

“The weakness in emerging markets and the associated economic troubles have encouraged some investors to reallocate from the emerging world to the U.S.,” James Gaul, a fund manager at Boston Advisors LLC, which oversees about $2.3 billion from Boston, said by phone on Aug. 15. “The U.S. is seen as the most stable economy at the moment, and the equity market is viewed as having better prospects than the rest of the world.”

Capital is fleeing developing nations as China’s economy grows at the slowest pace in 13 years, India’s current-account deficit widens to a record, and persistent inflation in Brazil erodes purchasing power. The share losses are a reversal from the past decade, when the countries led gains during a commodity boom and rising consumption from the middle class.

Here is a chart comparing the SPYs with the BRICs over the last three years: 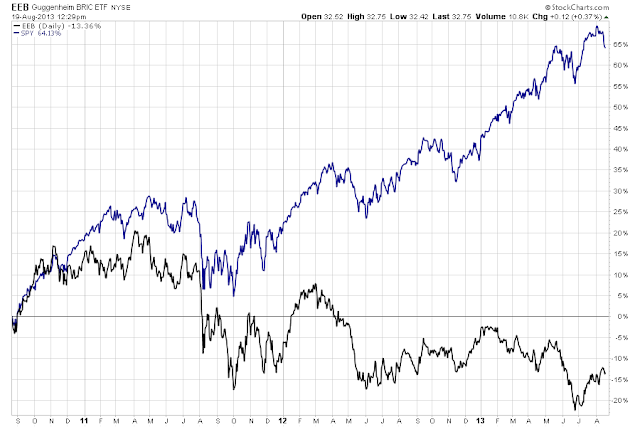