The difference in the two types of scenarios is manifest in the different way that interest rates have behaved vis-a-vis stock prices during the disinflationary period of 1982-97 vs. 1998 to the present. 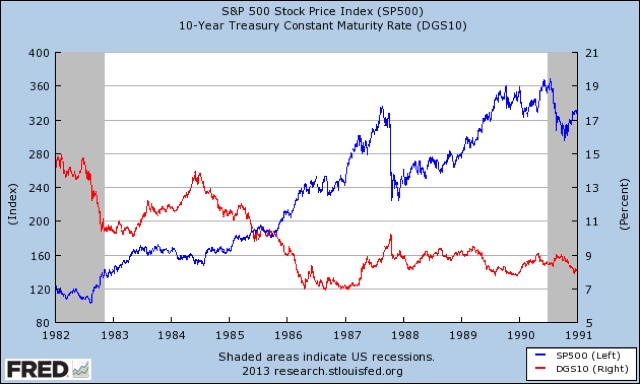 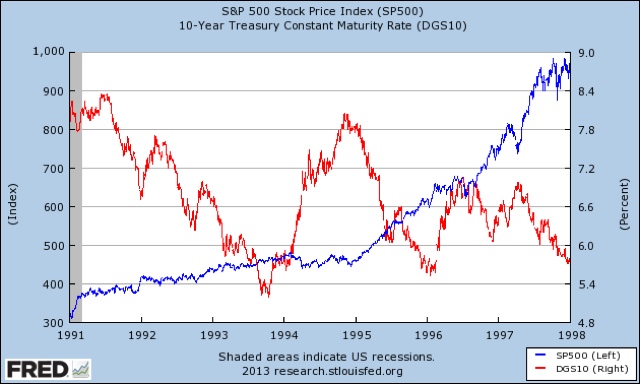 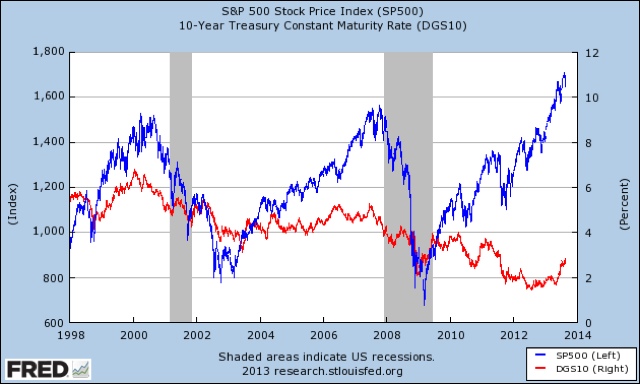 It's easy to see in the depictions above that from 1982 through 1997 at least, rising stock prices were paired with declines in bond yields. What is harder to see is that the mirror image of declining yields ands rising stock prices also applies to shorter periods. Conversely, and again it is somewhat harder to see in the depiction above, the period from 1998 on features bond prices declining in much more subdued fashion, and no longer as a mirror image of stock prices, even over most shorter terms.

But fear not, I wanted to show you the above just to give you the raw comparison. The difference in the relationship between stock prices and bond yields becomes much clearer when I measure each by their YoY percentage change. Here's 1982-97: 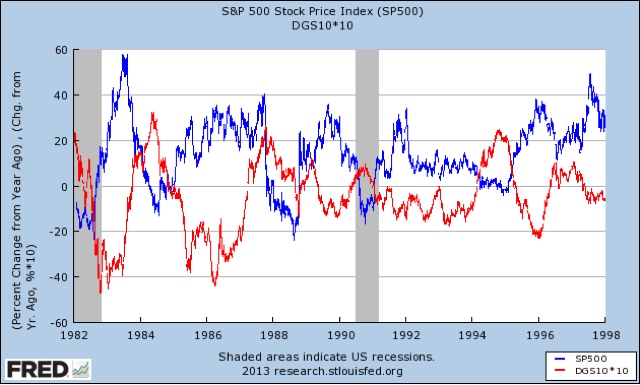 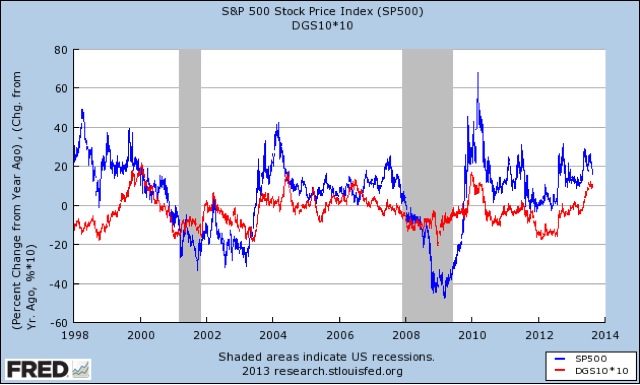 During the disinflationary period of 1982-97, as interest rates fell, there was continual room for consumers to refinance debt at lower rates. Further, consumers took on more and more debt. When inflation briefly broke back over 6% at the end of the 1980's, the Fed raised rates and inverted the yield curve, and the subsequent recession brought even lower interest rates, and an even lower general rate of inflation in the 1990's. During that period, bond yields fell even with a strong economy.

But that changed beginning in 1998. From that point until the present, bond yields have generally risen with a strengthening economy, and fallen with a weaker economy. As first the tech stock bubble burst, and then the housing bubble burst, there were deflationary moves in asset prices and declining bond yields simultaneously. Several times since then, there have been brief periods of outright deflation. Perhaps a more finely grained assessment is that, since 1998, during periods of a strong economy, bond yields and stock prices behaved as mirror images. But during periods of a weak economy (which has been the vast majority of the time since the turn of the Millenium), the two asset classes have moved in tandem. Since I think it is fair to say that the economy is quite weak, I expect that any decoupling in bond yields and stock prices now to be brief.
Posted by New Deal democrat at 8:30:00 AM