The oil choke collar and wages

I remain mystified why virtually the entire Econo-commentariat fails to notice the importance of the Oil choke collar operating in the background of almost all economic events. It is clear to me that the constraint imposed by the vanishing supply of cheap petroleum is an important determinant of how weak the economy has been since even before the great recession.

To refresh your memory, here is a graph of the price of Oil (blue) for the last 50 years, and the price of gasoline (red) since the EIA started keeping statistics in the early 1990's, adjusted by average wages. I use wages as the deflator since the price of Oil itself is a component of the CPI. Both are normed to 1 at the peak in July 2008: 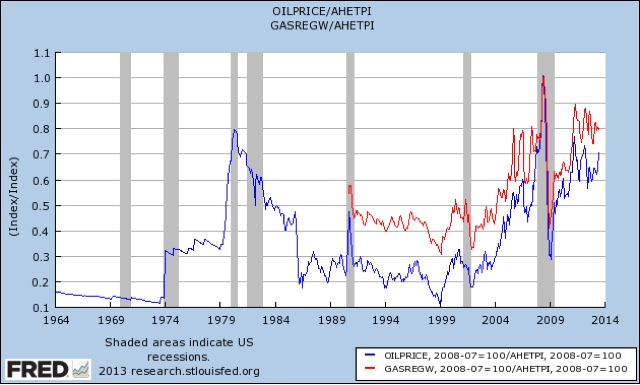 It is fair to categorize what happened between 1999 and 2008 as the second Oil shock, the first being the 1970's. And both had similar economic outcomes. In fact, at one point Prof. James Hamilton estimated that the Oil shock of 2008 was responsible for about half of the GDP loss during the great recession.

Further, note that in a "real" sense, the prices of Oil and gas remain very elevated, far higher than at any time except for the end of the 1970's and in early 2008. If Oil were not such a constrained resource, and gas was priced at $1.60 or even $2.60 a gallon vs. around $3.60 a gallon, as it has been for the last 2 years, there is little doubt that we would be seeing a much stronger recovery.

To make the point, well, more pointedly, the below graph shows the CPI (green) , CPI ex-energy (blue), and median wages from the Employment Cost Index (red): 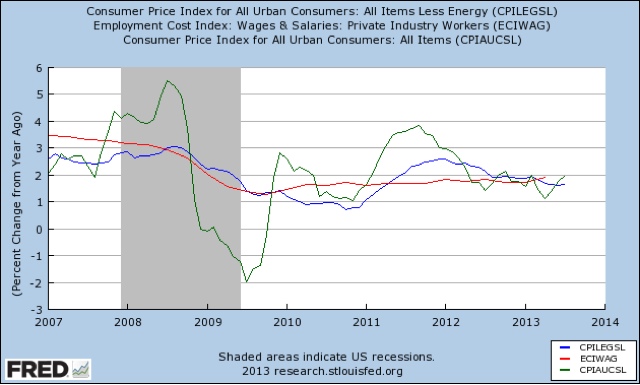 In short, the paltry increase in nominal median wages is only half of the story of working class wage stagnation. The other part is the surge in the real price of Oil, its continued highly elevated price, and its effect of being a choke collar constraining the economy.
Posted by New Deal democrat at 10:30:00 AM