Retail sales increased .2%, .5% ex-autos.  Here's a chart of the overall retail sales data that shows we are still in an upswing and are also at higher levels than the previous expansion: 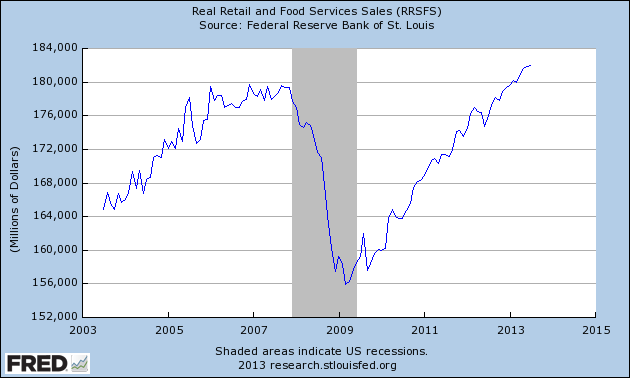 Housing starts increased 5.9%  M/M.  The real reason for the increase was the jump in multi-unit housing.

Homebuilder confidence increased to its highest level in eight years:

“Builders are seeing more motivated buyers walk through their doors than they have in quite some time,” said NAHB Chairman Rick Judson, a home builder from Charlotte, N.C. “What’s more, firming home prices and thinning inventories of homes for sale are contributing to an increased sense of urgency among those who are in the market.”

“Builder confidence continues to strengthen along with rising demand for a limited supply of new and existing homes in most local markets,” noted NAHB Chief Economist David Crowe. “However, this positive momentum is being slowed by the ongoing headwinds of tight credit and low supplies of finished lots and labor.”

The above two data points indicate the housing recovery is still on track and doing well.

The August 2013 Empire State Manufacturing Survey indicates that conditions for New York manufacturers improved modestly for a third consecutive month. The general business conditions index, at 8.2, was little changed from last month. The new orders index slipped four points to 0.3 and the shipments index fell seven points to 1.5, suggesting that both orders and shipments were flat.

I'm placing this in the neutral category because of the new orders and shipments drop.  Both are right above a "0" reading, indicating a contraction.  Also, this data series, while positive, has been a very "weak" strong for the last few months.

The Philly Fed's index, while positive, is also showing some problems:

The survey’s broadest measure of manufacturing conditions, the diffusion index of current activity, decreased from 19.8 (its highest reading since March 2011) to 9.3 this month (see Chart). The index has now been positive for three consecutive months. The percentage of firms reporting increased activity this month (28 percent) was greater than the percentage reporting decreased activity (19 percent).

Other current indicators suggest growth moderated this month. The demand for manufactured goods as measured by the current new orders index remained positive for the third consecutive month but fell 5 points to 5.3. The shipments index fell 15 points to just below zero, its first negative reading in three months. Both unfilled orders and delivery times indexes were negative this month, suggesting continued slack conditions.

Like the Empire state number, the internals of this report are a bit concerning.

Industrial production was unchanged from the preceding month, while capacity utilization dropped.

Consumer confidence dropped five points.  The concern here is this number is already at low levels and the drop was caused by higher interest rates.  This may indicate that consumers will start to pull back from the housing market.

Conclusion on the economic numbers: we had some concerning developments this week.  First, the industrial production numbers along with the related regional indexes were weak.  Both the Empire State and Philly Fed indexes have had a difficult time printing continued strong numbers this year, and the capacity utilization numbers numbers have been dropping since February.  Consumer confidence - which was also at weak levels -- dropped as well.  While retail sales were positive, they also printed just barely so.

Let's turn too the markets: 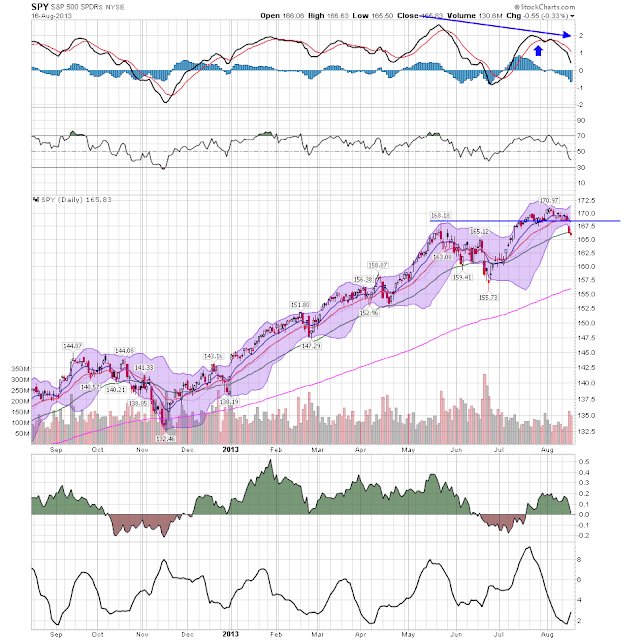 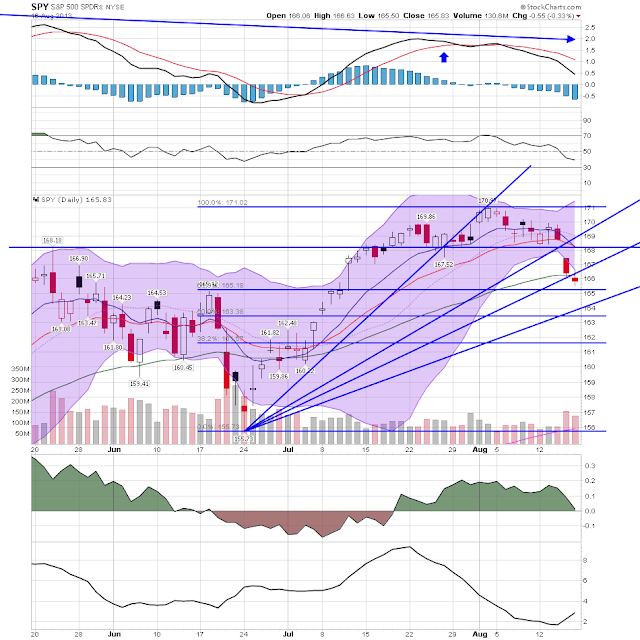 The longer-term chart (top chart) shows that prices dropped below the 168 level, which was established as a technical point in late May.  The MACD -- which printed a selling cross-over a few weeks ago, continues to weaken, along with the CMF.  Also note the uptick in the Bollinger Band width, indicating an increase in volatility.

The lower chart simply shows the important technical levels for a short-term market sell-off.  Prices are currently at the 50 day EMA and are just above the 61.8% Fib level. 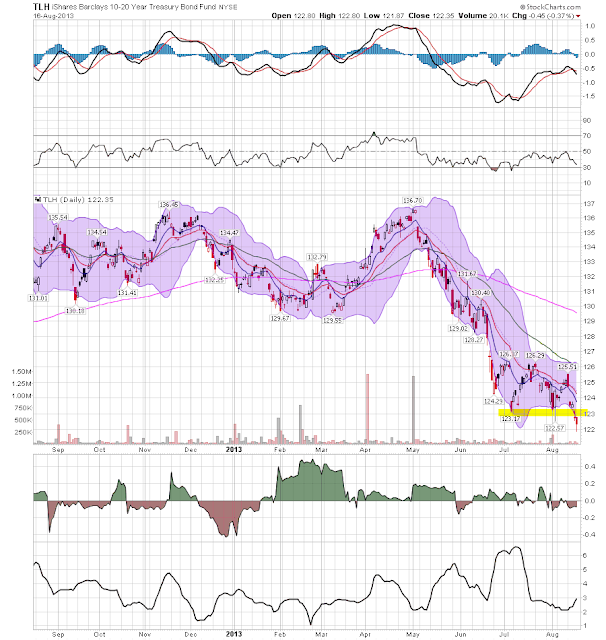 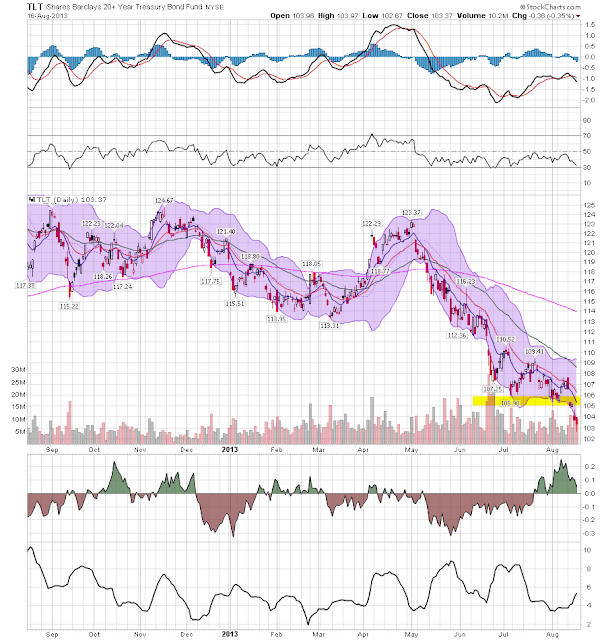 The long-end of the yield curve broke technical support.  The TLHs moved through the 128 level while the TLTs' dropped below 105.  The MACD's of both are in negative have also given a sell-signal, indicating a higher probability of moving lower.  The treasury market is preparing for the eventual withdrawal of Fed stimulus, which many are saying will occur in September. 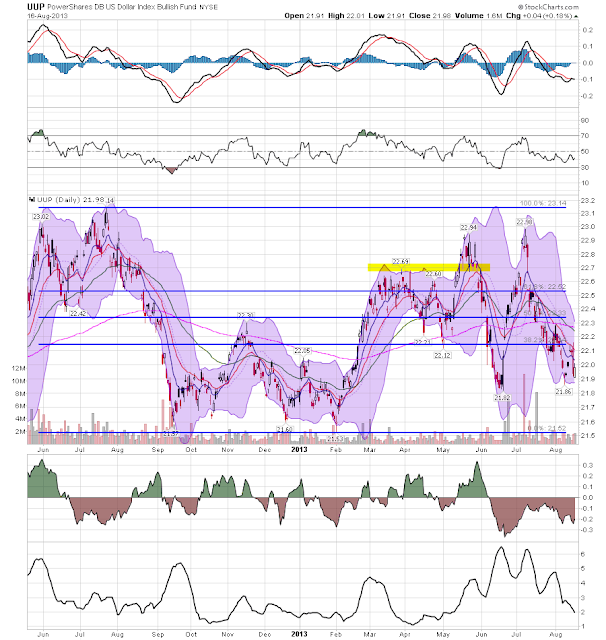 The dollar made a round-trip trade this week, starting and ending around the 21.9 level.   The overall trend since the beginning of July is lower, but there is still plenty of support at the 21.5 level to contain prices.