Is the EU Recession Really Almost Over?

Last week I noted that recent data -- specifically from the Markit manufacturing and service sector surveys -- were pointing to an EU recover, probably by the end of the year.  This week we learned that the EU experienced economic growth for the first time in six quarters.

Let's take a look at some of the statistics that are still negative, starting with industrial production: 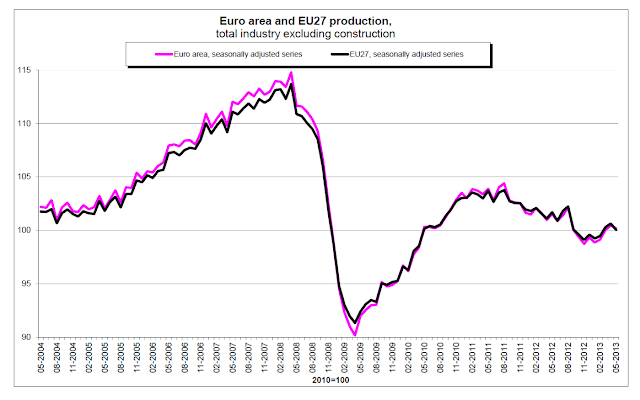 The overall trend for EU IP is still clearly lower. 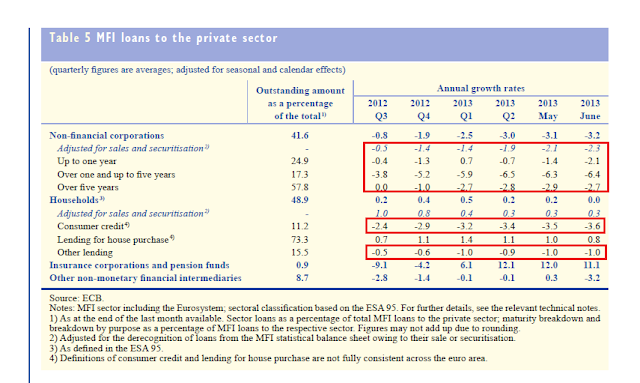 Here is the explanation offered by the ECB in their latest monthly report:

Overall, growth in loans to the non-financial private sector remains subdued in the euro area, mainly reflecting low levels of demand, although supply constraints remained in a number of countries.  Weak economic activity and persistently high levels of economic uncertainty continue to weigh on the demand and supply of bank loans. In this respect, the July 2013 bank lending survey identifies subdued fixed investment activity as the main factor explaining the weakness in loans to nonfinancial corporations. Moreover, while the July 2013 bank lending survey signalled limited changes in the net tightening of banks’ credit standards overall (and even a decline with respect to loans to
households), it continued to identify borrowers’ risk and macroeconomic uncertainty as the main factors restraining lending policies (see Box 3). At the same time, the persisting fragmentation of financial markets and tight credit supply constraints, although receding in recent months, continue to curb credit growth. Finally, the still high level of indebtedness for both households and non-financial corporations in a number of countries is also weighing on loan growth.

Remember that credit growth is an indication of an expanding economy.  In this low rate environment the mathematical decision to take out a loan is easily complied with, as the time value of money is so low.  The negative growth rate indicates there's still a long way to go for economic progress to be meaningful. 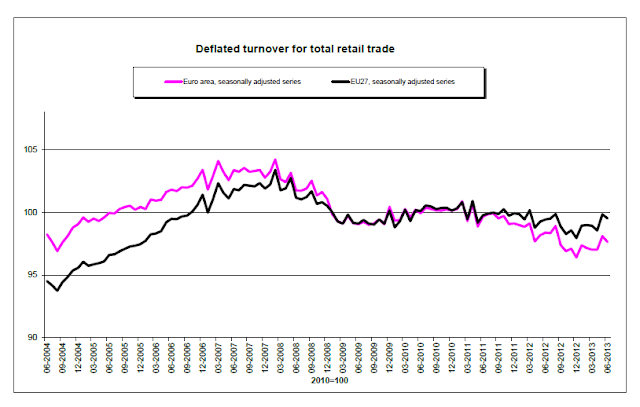 While the number has been increasing since 3Q12, the overall level has been relatively flat for about three years -- definitely not a good sign.