Will The Wealth Effect Lead to Increased US Consumer Borrowing?

As I noted last week, I'm pretty sanguine about the US economy.  Despite some decent ISM numbers last week, we're facing a third year of budgetary stupidity in Washington.  When this is combined with the weak reading in US GDP over the last three quarters, I don't see much beyond a subdued (or should I say "moderate") expansion.

But we may have a wild card in the mix.  Although overall pay growth has been fairly paltry this expansion (which is what you'd expect in a 7%+ unemployment environment) US consumers now have room to increase their revolving credit levels to power consumer spending.

Consider this chart of household (and non-profits) net worth: 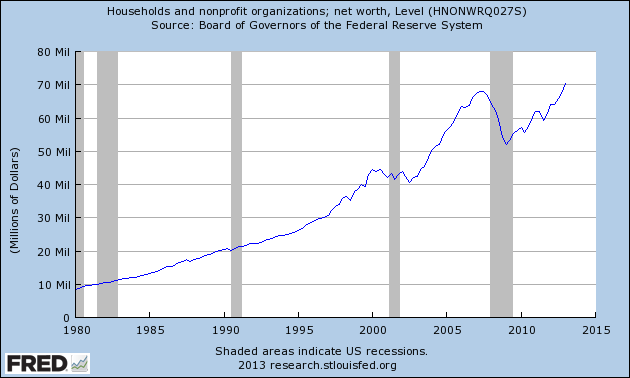 During the recession, this number took a big hit as equity and house prices dropped.  But the stock market has been rallying for the last three years, and homeowner's equity has finally started to increase: 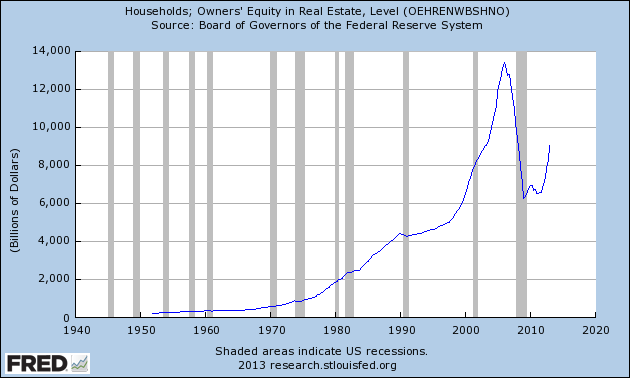 This can lead to what economists call the wealth effect, which is

The premise that when the value of stock portfolios rises due to escalating stock prices, investors feel more comfortable and secure about their wealth, causing them to spend more. For example, economists in 1968 were baffled when a 10% tax hike failed to slow down consumer spending. Later this continued spending was attributed to the wealth effect. While disposable income fell as a result of increased taxes, wealth was rising sharply as the stock market moved up. Undaunted, consumers continued their spending spree.

Consider the above data in light of the remarkably strong balance sheets US consumers now have:

“Household finances are in the best shape in decades,” said Joseph Carson, director of global economic research at AllianceBernstein LP in New York, with $435 billion in assets under management. “We now have a creditworthy borrower. It’s a powerful ingredient” for the U.S. expansion and “definitely a step up from where we have been.”

Households may become even more open to taking on debt as property values appreciate, stock prices hover near a record high and improving job prospects boost confidence. Payrolls rose by 162,000 in July, and the unemployment rate fell to a more than four-year low of 7.4 percent.

The U.S. is entering a new, “stronger growth phase” as healthier finances revive borrowing, Carson said. Credit will spur consumer spending, the biggest part of the economy, generating business investment and jobs to extend the expansion well beyond a fifth year since the recession ended in June 2009, he said

Here's a chart to show the condition: 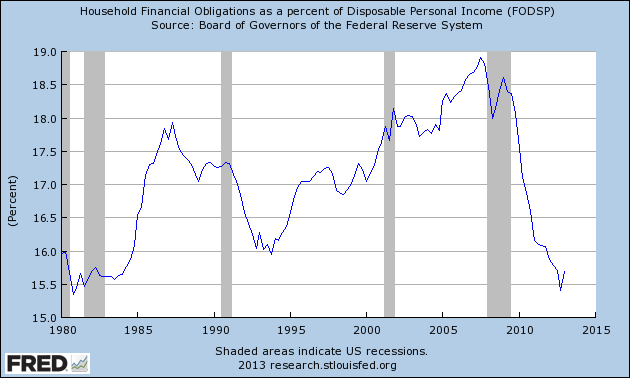 NDD has recently noted the slight uptick in the ratio. 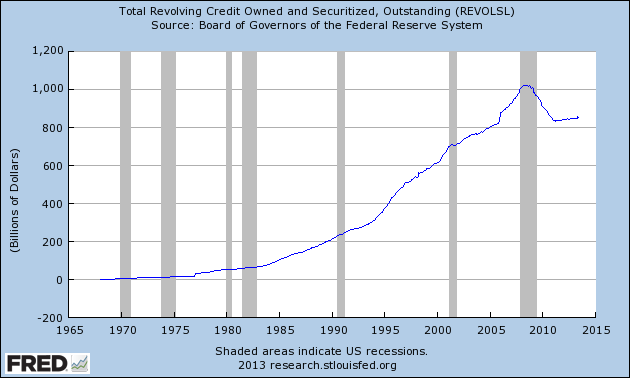 The chart above shows that US consumers paid down their revolving debt during the recession and into the recovery, but really haven't picked up the pace.  It's always possible that they won't out of concern for increasing their debt payments.  But, they could increase their borrowing assuming they feel confident enough in the future.  To that end, consider the University of Michigan's consumer sentiment index: 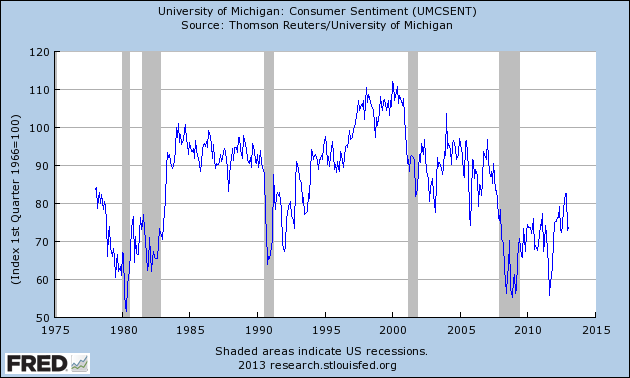 The index had finally advanced into the territory that was on the lows of the previous expansion's readings.  But we saw a retreat last month.  I don't think the current levels would lead to a large increase in credit spending, but a few more months of slightly higher readings with better unemployment news might.
Posted by Unknown at 6:00:00 AM