The blog "Credit Writedowns" has a post this morning entitled Household Income in the U.S. remains well below pre-recession levels.

That headline is completely accurate, but then the post starts off immediately with the statement that

One of the key reasons for the mediocre economic growth in the US has been the ongoing weakness in household wages.

And shows this graph of household income in support: 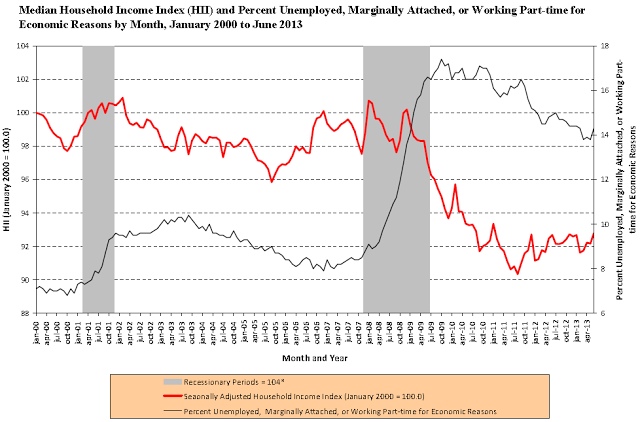 A large part of this wage dislocation can be explained by significantly higher use of part-time labor in the US....
Furthermore, a good part of the US job creation over the past couple of years has been in the low wage sectors. That, combined with the part-time employment trend (above) keeps household wages from rising substantially in spite of lower unemployment figures.
.... Moreover, some are suggesting that the Patient Protection and Affordable Care Act will ultimately result in even higher ratios of part-time employees – and therefore lower household incomes. ....Whatever the case, with wage growth suppressed and consumers still driving over 70% of the nation’s GDP, weak economic growth should not be a surprise.

While I agree that wage stagnation is a very important issue, Credit Writedowns has conflated wages with household income. Wages have NOT gone down nearly 10%. Rather, the fact that the employment to population ratio has dropped precipitously, partly because of increased unemployment, but also at least partly because of the wave of Boomer retirements, plus the collapse of interest rates to virtually zero on income bearing instruments like CD's and bonds, has caused a significant percentage of households to have dramatically lower incomes.

Further, as I have pointed out nearly every month for nearly four years, aggregate hours worked have increased considerably more than payrolls. And as I showed just last week, since payrolls bottomed at the end of 2009' almost all of the growth on net has actually come in the form of full time jobs.

The Credit Writedowns post is simply wrong.
Posted by New Deal democrat at 7:50:00 AM