Why Does Anyone Listen To John Taylor Anymore?

At one point John Taylor was a respected economist -- even creating a rule with his name on it.  He has a PhD in economics and teaches at Stanford.  Yet it's obvious that his ideology (he is a contributor to the WSJ editorial page) is getting the better of him when it comes to analyzing this expansion.

Now we have this gem, comparing the employment to population ratios of both recoveries. 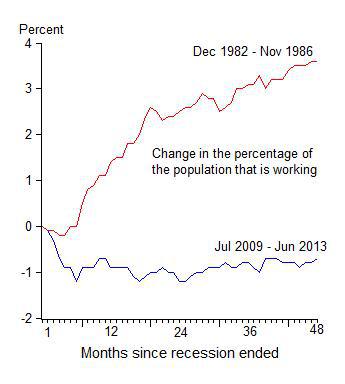 Doesn't that look terrible?  The policies of this administration must be causing huge problems!

Unfortunately, Taylor forgets about two trends that are greatly influencing the chart above, making his conclusions at best suspect and at worse malpractice.

The first is the baby boomers, as shown in this chart from the St. Louis Federal Reserve: 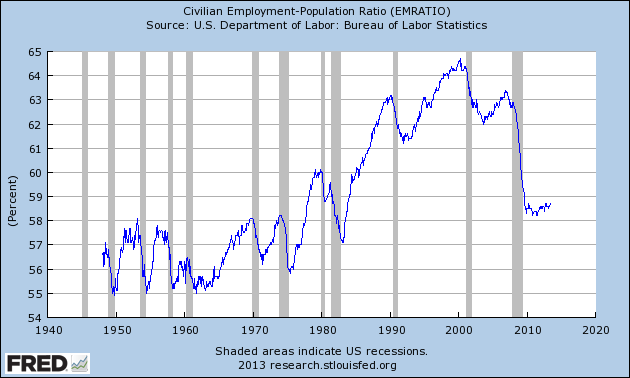 As the baby boomers hit their prime earning years, (which would have been right around the 1980s) they entered the labor force to get jobs.  Hence, the huge increase in the employment population ratio in both the 1980s and 1990s.  In fact, one could argue that both Reagan and Clinton benefited mightily from simple demographics.

The second trend was women entering the labor force: 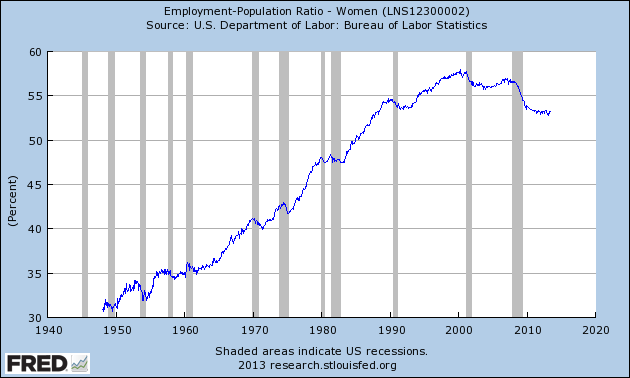 Notice the long climb of the employment population ratio of women in the labor force, which stagnated in the 1980s yet continued moving higher during both the 1980s and the 1990s.

So, a big reason for the increase in the employment to population ratio under Reagan was caused by simple demographics.

And the decrease in the employment to population ratio and labor for participation rate over the last five years is at least 50% caused by the baby boomers retiring.  See this article from the Chicago Federal Reserve, which concluded:

The authors conclude that just under half of the post-1999 decline in the U.S. labor force participation rate, or LFPR (the proportion of the working-age population that is employed or unemployed and seeking work), can be explained by long-running demographic patterns, such as the retirement of baby boomers. These patterns are expected to continue, offsetting LFPR improvements due to economic recovery.

Several weeks ago I wrote a piece titled, Why Do We Listen To Conservative Economists Anymore?  The bottom line is they've been wrong for the last 4 years in pretty embarrassing ways.  This is simply another piece of evidence against an entire school of thought.