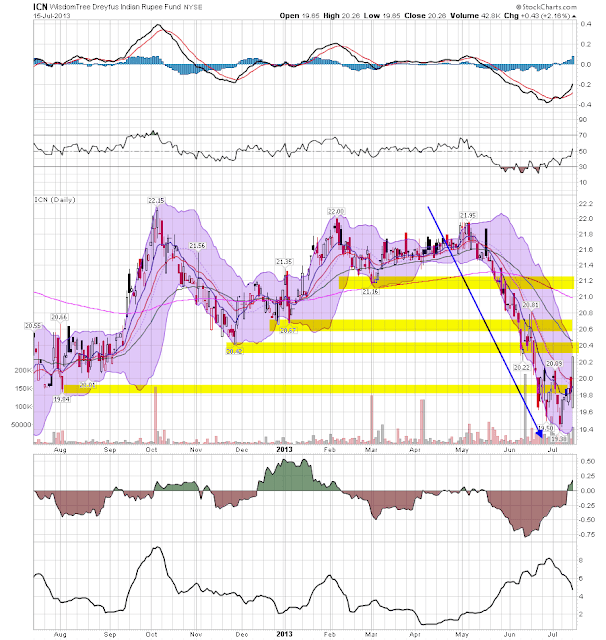 The chart above shows the rupee's ETF.  Over the last two months, it has moved through four different areas of support.  It has slow dropped below the 200 day EMA and taken the traditionally very bearish chart pattern of using the short-term EMAs as technical resistance.  The total drop amounted to a little under 12% from peak to trough.

The market perception of likely tapering of US Quantitative Easing has triggered outflows of portfolio investment, particularly from the debt segment. Consequently, the Rupee has depreciated markedly in the last six weeks.

Countries with large current account deficits, such as India, have been particularly affected despite their relatively promising economic fundamentals. The exchange rate pressure also evidences that the demand for foreign currency has increased vis-a-vis that of the Rupee in part because of the improving domestic liquidity situation.

Against this backdrop, and the need to restore stability to the foreign exchange market, the following measures are announced:

The Reserve Bank will continue to closely monitor the markets, the liquidity situation and the macroeconomic developments and will take such other measures as may be necessary, consistent with the growth-inflation dynamics and macroeconomic stability.

India stepped up efforts to help the rupee after its plunge to a record low, raising two interest rates in a move that escalates a tightening in liquidity across most of the biggest emerging markets. Bond yields and the rupee surged.

The central bank announced the decision late yesterday after Governor Duvvuri Subbarao earlier in the day canceled a speech to meet the finance minister. The RBI raised two rates by 2 percentage points, and plans to drain 120 billion rupees ($2 billion) through open market sales of government bonds.

The central bank increased the marginal standing facility and the bank rate to 10.25 percent from 8.25 percent, it said in a statement on its website. The monetary authority said it will conduct open market sales of government bonds worth 120 billion rupees on July 18, a step to drain cash from the economy.

“These moves will not only push up interest rates but also lead to tightened liquidity conditions,” said Prasanna Ananthasubramanian, an economist at ICICI Securities Primary Dealership Ltd. in Mumbai. “It’s quite surprising that the central bank has used these measures to support the rupee at a time when the economy is in such a bad state.”