From the Chilean Central Bank:

International financial conditions tightened, especially those facing emerging economies, mainly responding to signs of an earlier withdrawal of the monetary stimulus in the United States. Recent indicators for the U.S. economy are positive and point to a gradual recovery. The Eurozone continues in recession while growth forecasts for China have been revised downward, as have those for other emerging economies. The prices of foodstuffs and metals, including copper, receded in recent weeks, while fuel prices rose. The dollar showed a widespread appreciation in international markets.

Domestically, incoming information reveals an ongoing slowdown of output and demand, especially in investment. The labor market is still tight. Consumption has remained strong, but the evolution of credit conditions and confidence surveys suggest this variable will lose momentum. Headline inflation approached the tolerance range, as expected, while core measures remain close to 1% y-o-y. Inflation expectations over the policy horizon remain around the target.

From the Peruvian Central Bank:

1. The Board of the Central Reserve Bank of Peru approved to maintain the monetary policy reference rate at 4.25 percent.

This decision is based on the fact that the rate of inflation is within the target range in a context of economic growth in the country close to the economy’s potential level of growth amid international financial uncertainty.

The Board oversees the inflation forecasts and inflation determinants to consider future adjustments in monetary policy instruments.

Inflation is expected to converge to the center of the target range in the next months due to the improvement observed in the conditions of food supply, to a pace of growth of economic activity close to the economy’s level of potential output, and to inflation expectations anchored to the target range.

3. Current and advanced indicators of activity show that the growth of the Peruvian economy is close to its long-term sustainable level of growth, even though the indicators associated with the external market still show a weak performance that affects the prices and volumes of export products. 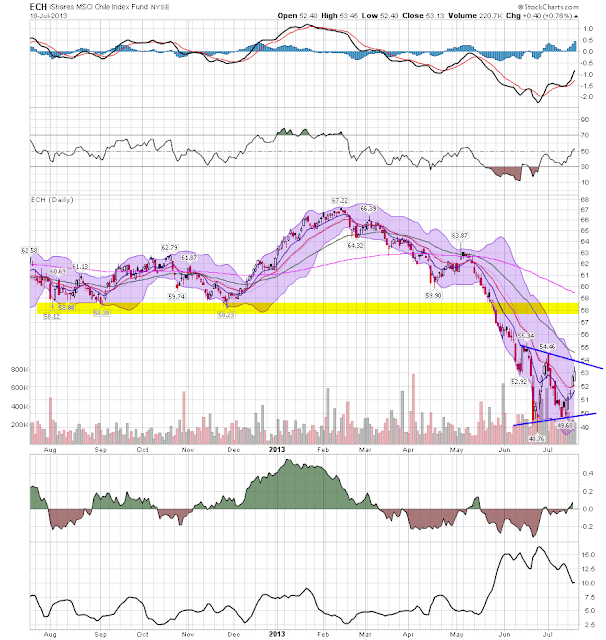 The Chilean ETF broke the strong support at the 58 price level in late May.   Since the the market has continued lower, bottoming on stronger volume in late June.  Currently the market is forming a symmetrical triangle.  While the MACD is rising, it's still in negative territory and the CMF has just turned positive.  However, the overall chart is still bearish and a move higher would have very strong upside resistance. 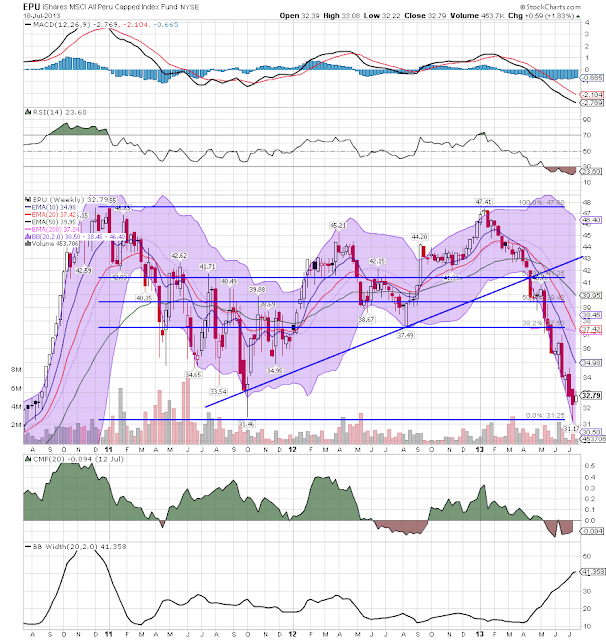 The weekly Peruvian chart shows that prices have been dropping since the beginning of the year and are no approaching a three year low.   The chart is extremely bearish: the downward trend has been in place for about half a year and we see strong bars printed in the sell-off.
Posted by Unknown at 6:00:00 AM