Failed Narratives: a reply to Barry Ritholtz and Noah Smith

Barry Ritholtz has a contemplative piece up at The Big Picture called The Narrative Fails. His thesis, borrowed from Cullen Roche, is that:

The economy continues to do okay, the stock market is hitting all-time highs every day, real estate is back on the up and up, interest rates remain very low by historical terms, the net worth of Americans is back at all-time highs, we’ve just dragged ourselves out of the worst recession in 80 years, but people are still upset about a lot of things . . . I have a feeling that there’s more to this general unhappiness than meets the eye. And I think a lot of people are mad because the fear case has totally lost out at this point.

I believe Barry is exactly right - as far as the stock market goes. The anger over any positive data is apparent in the comment section of almost all big economic blogs. Certainly if you click on almost any piece at Business Insider and start reading the comments, the stark raving outrage at any suggestion that the world is not immediately going to hell on a one way ticket is endemic.

So Barry is right about the stock market. Doomers who have been predicting crashes and double dips since just past the market bottom in 2009 (and even those who foresightedly got out of the market before late September 2008, but failed to get back in) have missed completely out on the best returns in nearly two decades.

But I think the positive narrative that focuses on stock market returns has also utterly failed. As it happens, this morning I was again pondering the simple fact that while the economy has been making positive strides ever since mid-2009, it hasn't been good enough. On a per capita rather than overall basis, many if not most markers of individual well-being have stalled out, or at least are well below their pre-recession peaks.

For example, I've put up a number of posts in the last month digging into the issue of average and median real wages. Average real wages haven't improved since 2009, and median wages are no better than they were in 2007.

That, accounting for population growth, employment hasn't nearly returned to its 2007 peak, is well known: 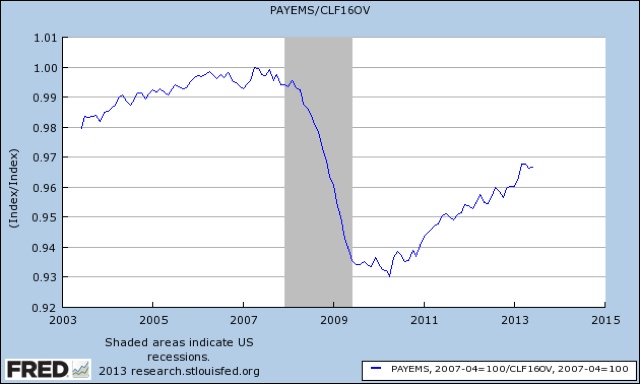 Here's another graph, taken from Doug Short's site, comparing how 4 coincident indicators of the economy: real retail sales, industrial production, employment and real income, have fared since before the recession: 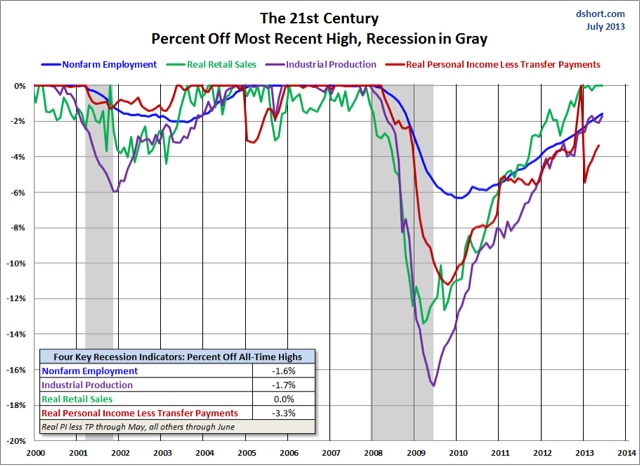 Real sales have made up all of their lost ground, and industrial production nearly so. But employment has only made up about 3/4 of its losses - and that not on a population adjusted basis. And real income still looks very poor, even though it has improved somewhat.

So if the Doomer narrative has failed, so has any notion that a booming stock market in any way reflects the daily tribulations of several hundred million Americans.

And speaking of Failed Narratives, Noah Smith writes today about How normal people see Macroeconomics, saying that "people understand arguments for redistribution but don't understand efficiency arguments," and elaborates that:

observation[s] ... from long experience and countless interactions with friends and relatives and strangers in cafes, blog commenters and op-ed writers and EconoTrolls. Among the things I've noticed are:

1. Normal people talk about economic "schools" much much more than do economists.

2. When normal people talk about the consequences of ... policy..., they often talk about the impact on the rich and poor, the benefits to big banks, and the "fairness" of the policies. In contrast, economists rarely talk about these things.

In a certain sense, the normal people's approach makes more sense than that of the economists.... [T]he impact of any redistribution of our titanic wealth will be enormous. Economists usually try to be impartial, shrugging and saying "Rent is rent!" when confronted with questions of distribution, or pooh-poohing welfare analysis as the province of philosphers and dorm-room discussions. They focus on efficiency because a Pareto improvement is something that everyone can get behind (in fact, that's how it's defined).

And only about 10 comments down, says:

economists usually assume complete markets, so that Pareto efficiency can be defined in terms of money.

Thereby demonstrating exactly why normal people do not share the narrative that he says mosts macroeconomists share.