Have real wages been stagnating or actually declined? I've been following up with research as to that issue for several weeks. I've already examined four measures of average real, inflation adjusted wages, which showed stagnating to slightly rising wages since the turn of the Millenium.

But what about median wages, i.e., the wage earned by those exactly in the middle of all wage earners? In this post I'll examine specifically median measures, one from the Social Security Administration, measured two ways, and three from the Bureau of Labor Statistics. As it turns out, whether median real wages are declining or not depends very much on your starting point. To cut to the chase, I found that

1. The stories that claim that real median wages have declined during the recovery are correct, but
2. Those same measures show that median wages actually rose during the great recession, and by roughly the same amount, and for the same reason.
3. Meaning that median wages measured from any period from 2007 or earlier up until the start of the Millenium have generally stagnated.

Now let's dig into the details. The Social Security Administration measures annual net compensation from actual W-9 tax withholding forms. Since this method means that the result is subject to change based on the total hours worked (remember that in the recession we lost 6% of jobs, but almost 10% of aggregate hours), I have deduced a second measure that adjusts by the average work week in the private nonagricultural sector. Since we don't know if the hours lost were proportionate across all income classes, this is only an approximate measure, but it does give us a closer measure of the actual median hourly wage.

The Bureau of Labor Statistics, which conducts the household employment survey, reports "usual weekly earnings" for full time workers each quarter. Separately, it also keeps track of occupational employment statistics which are reported annually. Finally, I have also included the BLS's Employment Cost Index which is also released quarterly.

Here's the table of all five calculations. Remember that all measure the median, i.e., 50th percentile, and all are adjusted for inflation. The peak in wages is bolded. One series shows a bottom, and that is italicized:

Note the oddity that, once we adjust for hours worked, all 4 data series collected by the two agencies show peaks in the teeth of or at the end of the worst recession in 70 years! This is not what we would expect. It has long been my contention that the price of gasoline has been a strong determinant of the consumer economy since it started to rise secularly over 10 years ago. So what happens when we add a further adjustment for the price of gas? Unfortunately only one of the five measures, the Employment Cost Index, is available in graph form at the St. Louis FRED, but the below graph compares it (in blue) with changes in the price of gas (red): 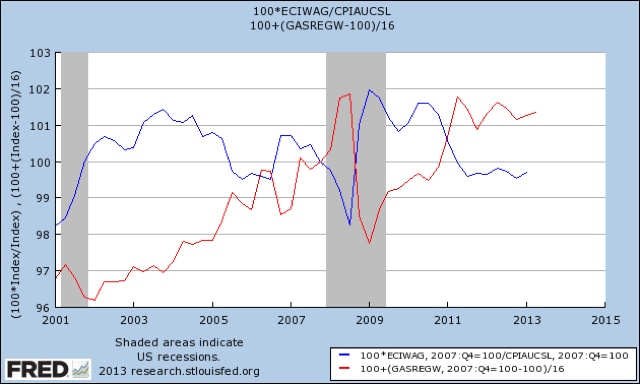 As you can see, the two lines are virtually mirror images. Now let,s a look at a table of all five measures using inflation ex-energy:

With one exception, the peak in wages is moved forward in time, and in three cases, the peak comes just after the end of the recession. This tells us that the big decline in gas prices during the middle of the recession had a big effect on the measure. Still, the big subsequent rebound in gas prices did filter through the economy and real wages failed to keep up, causing significant declines between 2010 and at least 2010.

At the same time, it is noteworthy that the measures of usual weekly wages, employment estimates, and the Employment Cost Index show that wages are equal to or above what they were when gasoline first hit $3 a gallon in 2007. This is more evidence that the 2007-2009 increase and the subsequent 2009-2012 decline had everything to do with the decline of gasoline from $4.25 to $1.40 a gallon and its subsequent rebound to $3.90 during those respective periods.

The above tables give annual values. But two of the series, Usual Weekly Wages and the Employment Cost Index, are measured quarterly. So we can get a much more granular look if we examine the quarterly measures from those two series. The below table does that, starting with the first quarter of 2007:

Again we see the affect of including or excluding gas prices on real wages. But more importantly, whether or not we include gas both series hit bottom in 2012, and have not declined since then.

So what can we conlude? In the first place, nominal wages haven't fallen. As this graph supplied by the Social Security Administration along with its data above makes clear, average wages have increased but at a slower rate since the recession, and median wages have stagrated or slightly risen: 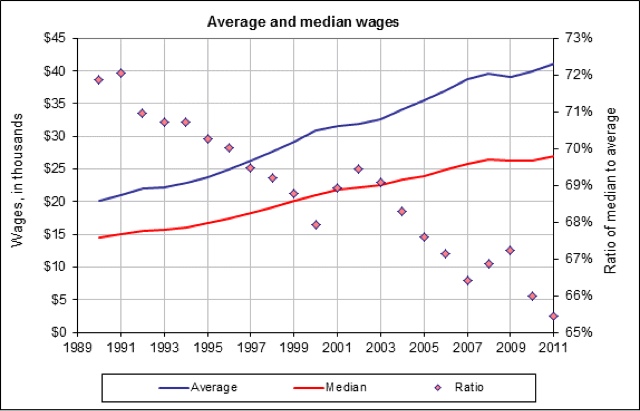 The below graph measauring the unadjusted Employment Cost Index (red) vs. CPI including gas (green) and CPI ex-gas (blue) shows the same thing: 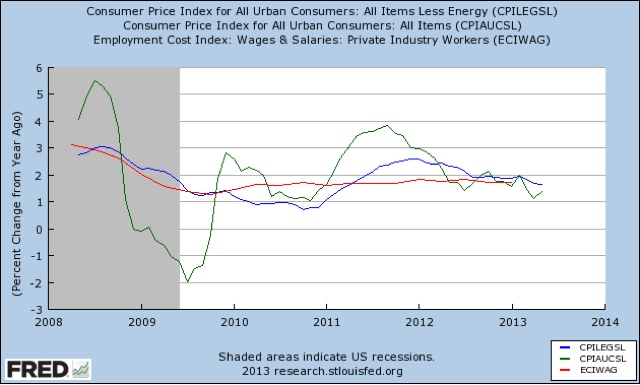 Similarly, nominal "usual weekl y earnings" have risen from $742 to $769 and Occupational Estimated wages have risen from $15.37 an hour to $16.71 an hour during the period that they have fallen on an inflation adjusted basis, In other words, the first big conclusion is that it isn't so much that wages have fallen, so much as that wages have failed to keep pace with inflation between the recession and 2012, particularly gas prices, which ultimately filtered through the entire economy.

Secondly, the reference point for wages very much makes a difference. It is certainly very true that in all of the above measures, real median wages fell since the end of the recession. On the other hand, every measure that extends through 2012 shows that real median wages were equal to where they were in 2007 just before the recession when gas prices first hit $3.00 a gallon. I have checked for news stories during that time, and as far as I have been able to find, none of the people bemoaning the decline in real wages since then were trumpeting the gain in real wages during the recession! Rather, their stories were about how median wages had fallen between 2000 and 2006 or 2007, which as you can see from the first graph above, occurred for the same reason.

It is interesting especially with the quarterly data to note that the declines in real median wages appeared to stop at some point in 2012 in the Employment Cost Index. The first quarter drop in the usual weekly wages data is certainly a concern, but I suspect that may mark the bottom. As this data will be updated within the next month, I'll keep an eye out for it and report.

In short, in the longer view since the turn of the Millenium, real median wages have stagnated. Gas prices caused them to rise during the recession, and then decline thereafter as the effects of those gas prices filtered through the economy. It may also be that disproportionately low income jobs were lost during the recession (causing the median to rise) and low income jobs have been disproportionately gained thereafter (causing the median to fall).The jury is out on whether that decline has ended. Since average real wages have risen significantly since the beginnng of this year, I am inclined to believe that real median wages will follow, although to a lesser degree.

Finally, note that the above analysis is strictly about wages.I have yet to deal with the nearly 10% declines in income shown by Piketty and Saez, relied upon by David Cay Johnston, and the similar decline shown in the Sentier data followed by Doug Short. I'll turn to that next.
Posted by New Deal democrat at 7:00:00 AM