The long leading indicators - an update

In view of the recent interest rate spike, now is a good time to review the status of the long leading indicators, which typcially forecast the economy more than 12 months in advance. Last month I wrote that a 1% spike in interest rates was necessary but not sufficient to signal recession. At the time I considered adding housing permits, but I didn't. For a good reason: housing permits don't add much information to the signal given by interest rates. 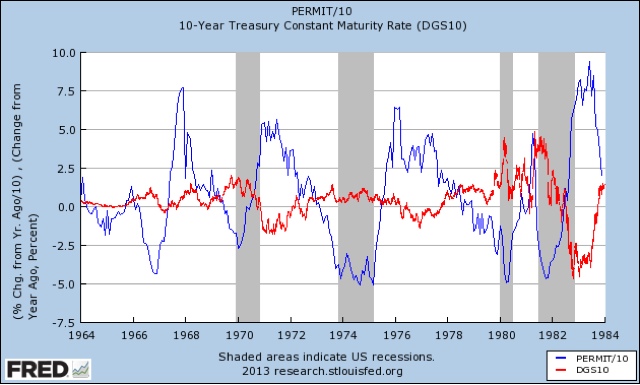 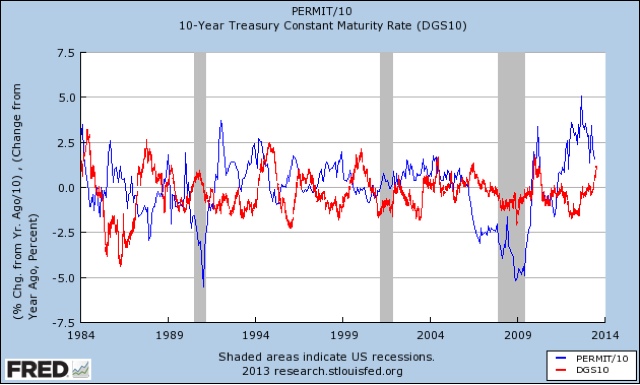 OK, they're squiggles. But the important point is they are esssentially mirror images of one another. When interest rates go up 1% or more, YoY housing permits go down and even turn negative. Literally the only exception to this pattern was 2006-09 when the housing bust presaged the deflationary great recession, so interest rates went down as well. But notice that there are a number of occasions (9 to be exact) when interest rates increased, and housing permits decreased, but no recession occurred: 1966, 1968, 1972, 1978, 1984, 1987, 1994, 1996, and 2004.

Put another way, the sudden softness in housing permits and starts in June may have been a surprise in their quickness, but are an expected result of the interest rate increase and don't give us a lot more information about the economy.

That doesn't end the inquiry, because a third long indicator, corporate profits, looks like it is stalling. The actual series used has only been updated through the first quarter, but Barron's keeps track weekly of reported S&P 500 earnings. Here's what the 4 quarter trailing earnings look iike: 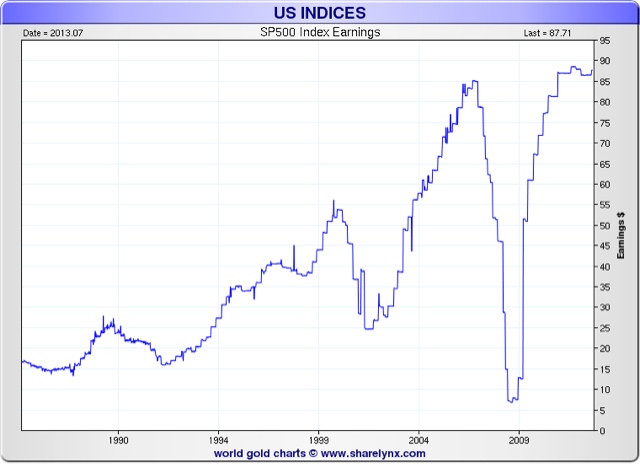 Corporate earnings, as measured by the S&P, have actually turned negative YoY. That doesn't mean that corporate profits as a whole have turned negative, and of course not all second quarter earnings are in. But here's what happens to recession risk when we add in corporate profits (green), again in the first graph from 1964-83, and in the second from 1984 to the present [note I've changed the scale for corporate profit YoY% changes during the 1984-2001 period, just to make them more visible. The change doesn't affect direction at all]: 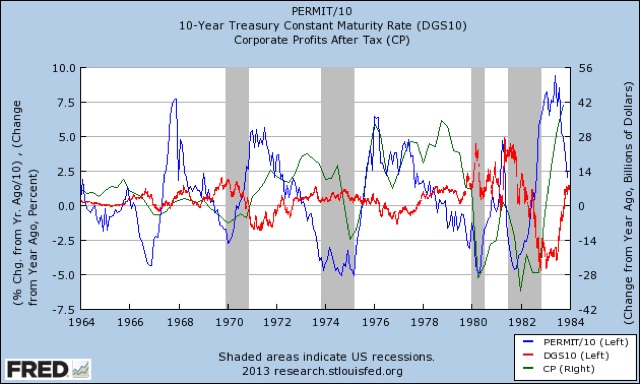 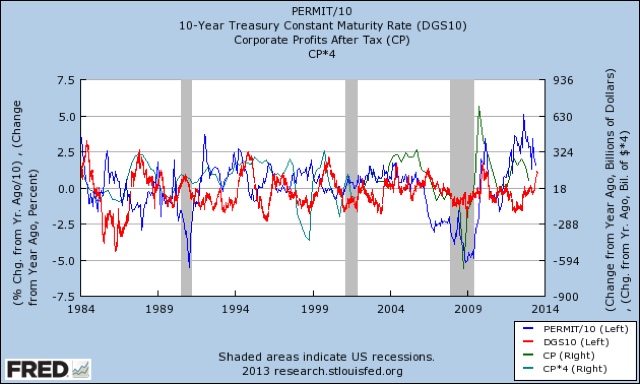 OK, even more squiggles. But here's what you need to know: when we add in corporate profits as an indicator, all but two of the false positives for recession drop out, leaving only 1966 and 1984. In both cases, by the way, the economy came close to going into recession, but didn't.

Look to the most recent readings: while interest rates are up over 1% YoY, housing permits haven't quite yet turned negative YoY, and corporate profits after taxes are still slightly positive.

Finally, in the past real M2 has had to be less than +2.5% YoY to signal a recession in the near future. We're not close to crossing that threshhold. The graph below shows all four long leading indicators. Real M2 YoY is in red, and adjusted so that a reading of below 100 means real M2 has grown less than +2.5% YoY. Note that the reading remains above that point. The other three long leading indicators are normed to 100 in June 2009. Interest rates are inverted so that an increase in rates reads as a decrease in level: 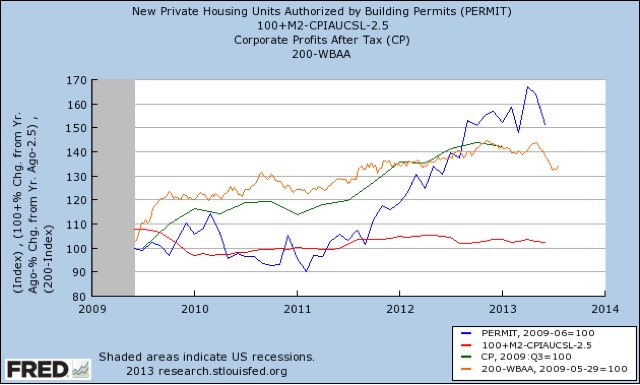 Note that we actually had a small but actual downturn in 3 of the 4 long leading indicators (permits, corporate profits, and real M2) in parts of 2010 and in early 2011. Doubtless this was one of the things leading to ECRI's blown recession call almost two years ago. As of now, we don't have even that synchronized downturn.

To summarize: interest rates have risen sufficiently to cross a warning threshhold, but housing permits are still positive YoY (although I strongly suspect they'll turn negative within a few months if interest rates remain at their recent elevations). Corporate profits are also on the verge of crossing a negative threshold, but aren't there quite yet. Real money supply is still significantly positive.
Posted by New Deal democrat at 10:30:00 AM