How Much Damage Will Rising Rates Do To the Housing Recovery?

Even a spike in mortgage costs since late spring — interest rates have jumped nearly a full percentage point — doesn’t appear to have stanched the flow of would-be buyers. It’s possible some buyers moved up their purchases to lock in attractive rates before the rose, analysts say

Housing has been one bright spot in the US economy over the last year, as sales are now in uptrends for both new and existing homes.  However, over the last few months we've seen a drop in bond prices (and a corresponding increase in bond yields).  Consider this chart of the TLT -- the long end of the Treasury market: 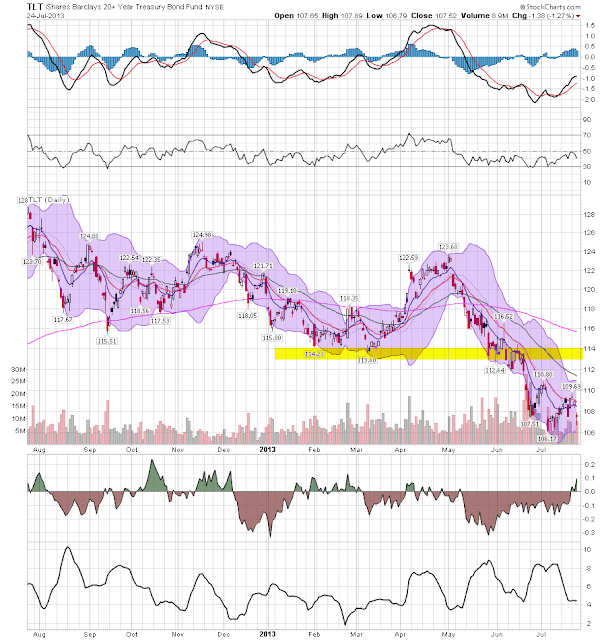 Prices have fallen through the 113/114 price level which was providing short term support.  Now prices are in the 106-110 level and appear to be finding a short-term bottom.  There's an uptick in momentum and a newly positive CMF implying at least a stabilization.  In addition, consider the yield on the 10 year is now fluctuating around 2.5%, which isn't a bad rate of return in a low inflation environment.  Put another way, I think we've seen the big bump up in rates that would be expected after the recent Fed announcement regarding tapering its bond buying program.

However, consider this scenario.  Interest rates are clearly rising.  Rate increases will be contained to a certain extent as purchasers such as foreign central banks re-balance their portfolios to take into account the rising rate scenario.  But make no mistake; rates are clearly moving higher.  At the same time, US unemployment is still 7.6%, meaning there is little to no upward wage pressure.  This explains why median incomes have been stagnant for the last 10 years.  At the same time, we've seen a recent spike in oil prices that are also eating into incomes.  And then there is the increase in the median price of new homes: 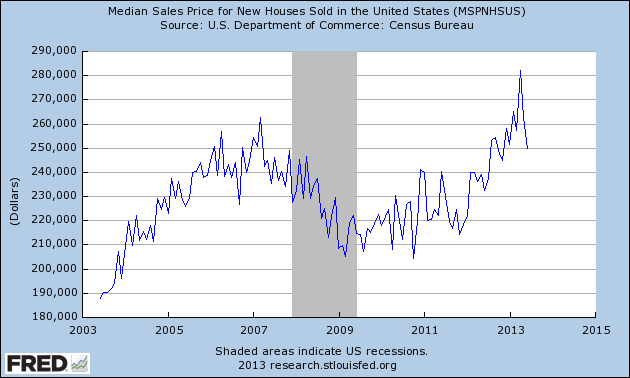 At some point the combination of rising rates, higher oil prices, stagnant incomes and higher home prices may start to slow home sales.
Posted by Unknown at 10:00:00 AM