A stark shift in investor sentiment in global equity markets has accelerated this year with a widening gulf between the market value of big US banks and commodity companies in emerging markets.

Five years ago, just ahead of the collapse of Lehman Brothers investment bank, the market capitalisation of US banks fell below the value of energy, materials and mining companies from the Bric countries – Brazil, Russia, India and China.

The switch appeared to highlight a shift in global economic power and the rise of fast-growing economies beyond North America and western Europe.
But now investor sentiment has flipped again. At the end of last week the market capitalisation of US banks – which exceed $1tn for the first time since November 2007 – was more than twice that of Bric energy and material companies, which were valued at $432bn, according to calculations by the Financial Times.

Central to the economic growth model of the early 2000s was the South South trade: southern hemisphere countries with lots of raw materials to export sold massive quantities to China.  Now that China is slowing, that trend is far smaller.
This relationship is really apparent in the following chart that shows the relationship between the XLBx (basic materials ETF) and the XLFs (financial ETF): 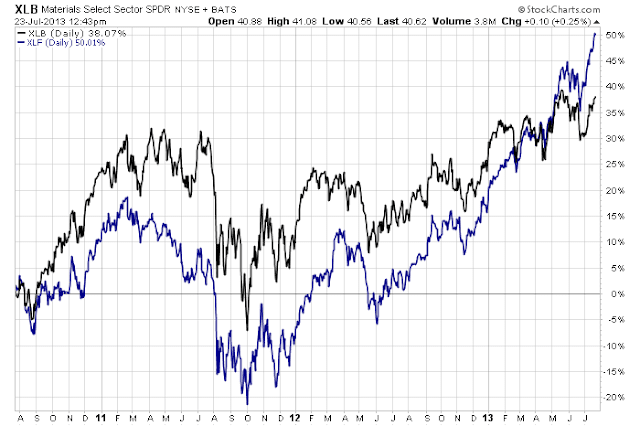 The financial sector started to overtake basic materials at the beginning of the second quarter.