Deflation Is The Real Risk To the US Economy

The following is from Bernanke's speech to Congress last week:

Meanwhile, consumer price inflation has been running below the Committee's longer-run objective of 2 percent. The price index for personal consumption expenditures rose only 1 percent over the year ending in May. This softness reflects in part some factors that are likely to be transitory. Moreover, measures of longer-term inflation expectations have generally remained stable, which should help move inflation back up toward 2 percent. However, the Committee is certainly aware that very low inflation poses risks to economic performance--for example, by raising the real cost of capital investment--and increases the risk of outright deflation. Consequently, we will monitor this situation closely as well, and we will act as needed to ensure that inflation moves back toward our 2 percent objective over time.

Over the last few months, the hyper-inflation calls of many have gone by the wayside as more and more evidence emerges that deflation may be the real potential problem we are facing. 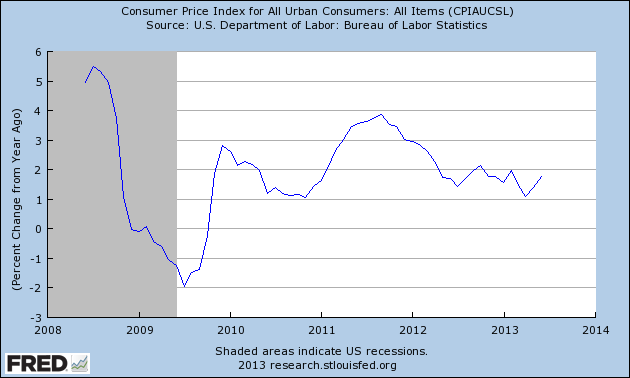 Total CPI has been running below 2% for most of the last year. 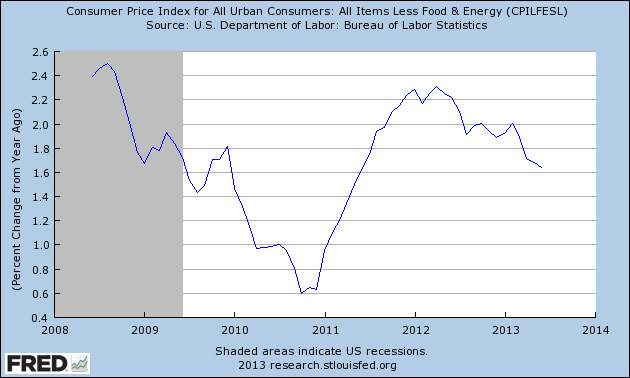 Core CPI's YOY rate has been declining since early 2012 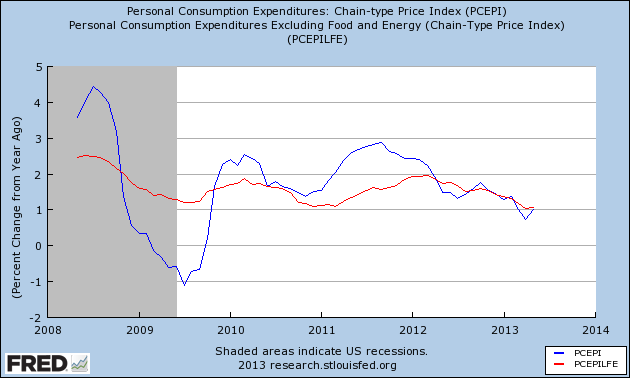 Both the year over year percentage change in PCE and core PCE expenditures have been decreasing since mid-2011 (total) and early 2012 (core). 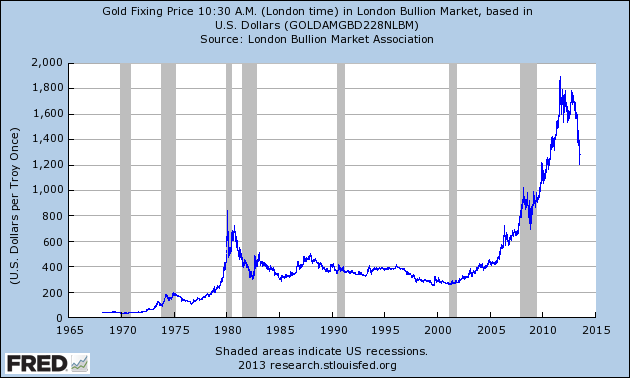 Perhaps most importantly, gold (which I use as a proxy for inflation expectations among traders) has dropped from very high level.

And where would potential inflation come from?  Overall demand is low.  The US unemployment rate is still over 7% leading to low wage growth.  This prevents demand pull inflation from occurring.  Capacity utilization is at 77.8%, indicating factories have plenty of ability to ramp up current production to absorb increased demand.

Internationally, China is slowing and shifting to an economic model more focused on domestic demand.  That means the upward pressure on commodity prices doesn't exist in the same rate.  The EU is still in a depression, lowering demand from the second largest economic block in the world; the developing world is slowing  in tandem with China. 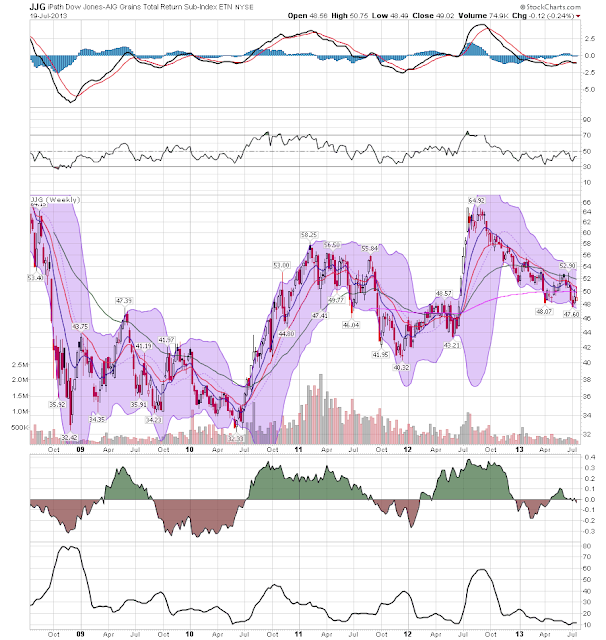 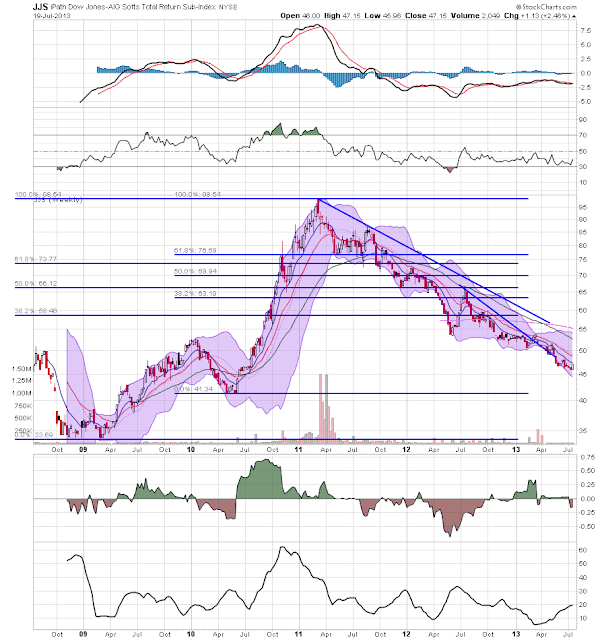 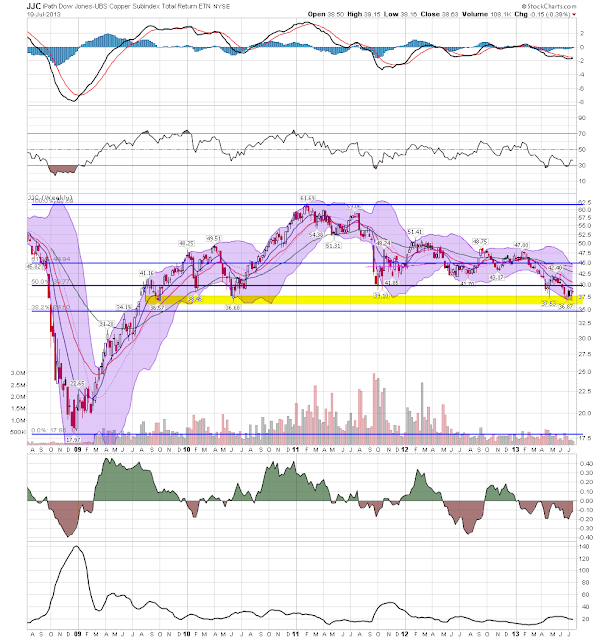 Copper is at important technical levels on the low side. 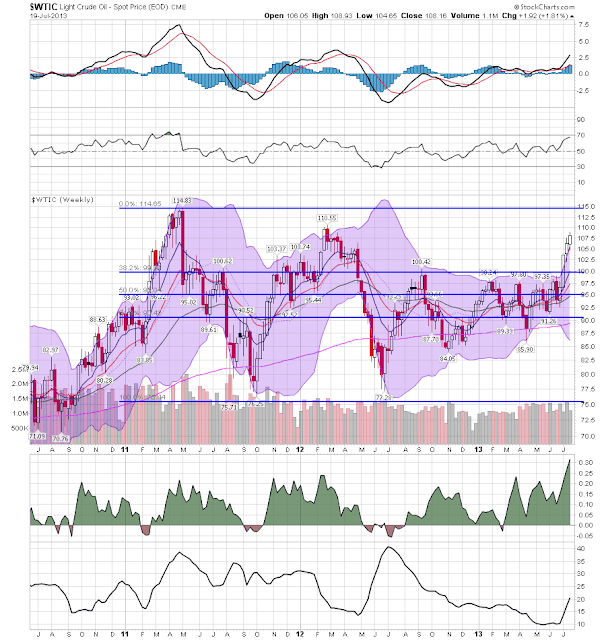 Oil is the one commodity that runs counter to this thesis.  However, it's recent rise has occurred in the summer (and therefore in the "summer driving season) and was originally caused by the political situation in Egypt. More importantly, as oil's price increase the oil choke collar tightens around the US economy, slowing growth and therefore inflationary pressure.

Commodity prices are declining, save for oil.  And oil's price increase will eventually slow growth decreasing inflationary pressure.  Unemployment is still too high to lead to meaningful wage increases and capacity utilization can still increase to absorb price pressures.  In this environment, inflation just isn't a major problem.