Last week the Fed released the Beige Book, which contained this summation of the economy:

Reports from the twelve Federal Reserve Districts indicate that overall economic activity continued to increase at a modest to moderate pace since the previous survey. Manufacturing expanded in most Districts since the previous report, with many Districts reporting increases in new orders, shipments, or production. Most Districts noted that overall consumer spending and auto sales increased during the reporting period. Activity in a wide variety of nonfinancial services was stable or increased in most reporting Districts. Transportation was stable or increased in several Districts. Tourism remained strong in some reporting Districts, although several Districts noted softness from bad weather. Residential real estate and construction activity increased at a moderate to strong pace in all reporting Districts. Commercial real estate market conditions and construction continued to improve across the Districts. Banking conditions generally improved across the Districts. Credit quality improved, while credit standards remained largely unchanged. Agricultural conditions were mixed, as weather patterns varied, while extraction was generally stable or increased.

The overall picture is of an economy growing at a slow but steady pace.  Hardly news around here, but a good summation nonetheless.  Let's take a look at some of the individual pieces of information.

There were several releases on manufacturing that were positive.  Overall industrial production increased .3%.  This was a welcome development as the last two monthly readings have been disappointing.  Additionally, the Empire State Manufacturing Survey increased to 9.5 -- not a barn burning level, but a slight increase from the previous month.  The reports internals were far more encouraging with new orders and overall production increasing.  The Philly Fed index increased to 19.8, which was the highest reading since March 2011.  sub-indexes also showed noticeable improvement.

Retail sales -- while increasing .4% in nominal terms -- decreased slightly overall.  More importantly, outside of increases in car purchases, other purchases decreased: Receipts at restaurants and bars decreased 1.2 percent in June, the most since February 2008. Sales dropped 2.2 percent at building materials outlets, the most since May 2012. Purchases at department stores fell 1 percent in June, a fifth consecutive decline.

Just as importantly, the Conference Board reported the LEIs were at 0 last month:
“The U.S. LEI was flat in June. Declines in building permits, new orders and stock prices were offset by gains in consumer expectations, initial claims for unemployment insurance, and other financial indicators. However, the LEI’s six-month growth rate remains positive, suggesting the economy will continue expanding through the end of the year.”

Here are the internals in more detail: 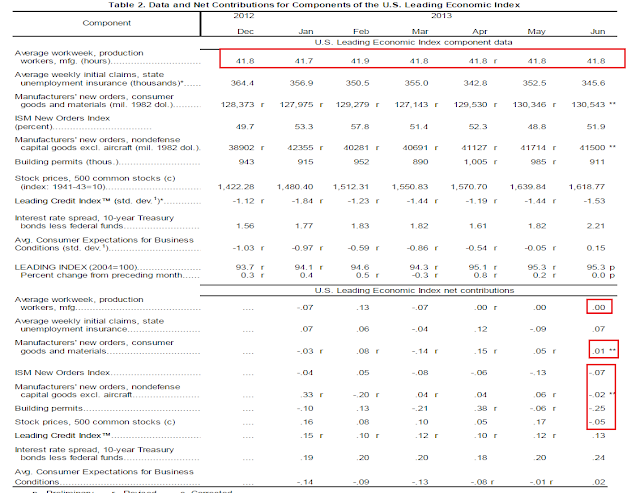 Four of the indicators were negative  -- ISM and manufacturers new orders, stock prices and building permits.  Manufacturers new orders for consumer goods were just barely positive while the average workweek of production workers was 0.  Also note in the top graph, worker's hours have been treading water for the last 7 months.

Housing starts decreased 9.9% and housing permits decreased 7.5%.  However, the real issue here is why is this occurring.  Sober Look at the markets offers this analysis which I think is well worth considering:

There is another issue however that nobody wants to discuss. Anecdotal evidence suggests that the sudden rise in interest rates has spooked some developers who decided to cool things down a bit - at least until there is more certainty around rates and economic growth (we've seen glimpses of this earlier).
There is no question that construction will resume on its upward path, if for no other reason than demographics. The US population is growing at the rate of roughly 2.3 million per year and construction rates are just not keeping up.

The just is still out on why we saw this drop.  But I don't think the interest rate issue can be ignored.

Conclusion:  the news this week had some important problems.  The 0 reading on the LEIs is pretty concerning, as these numbers have a very good predictive history.  The drop in housing starts and permits is also potentially problematic.  Yes, it is one month worth of data which means we shouldn't read too much into it.  But it's also occurring during a period of rising rates and slowing retail sales which is concerning and bears further watching. 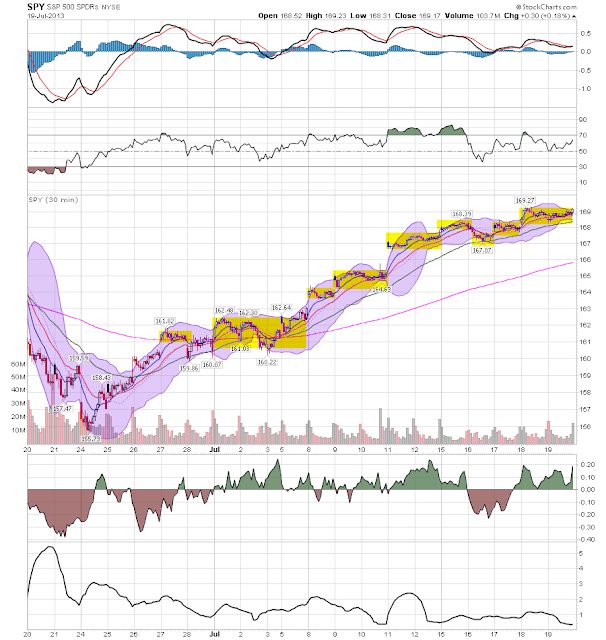 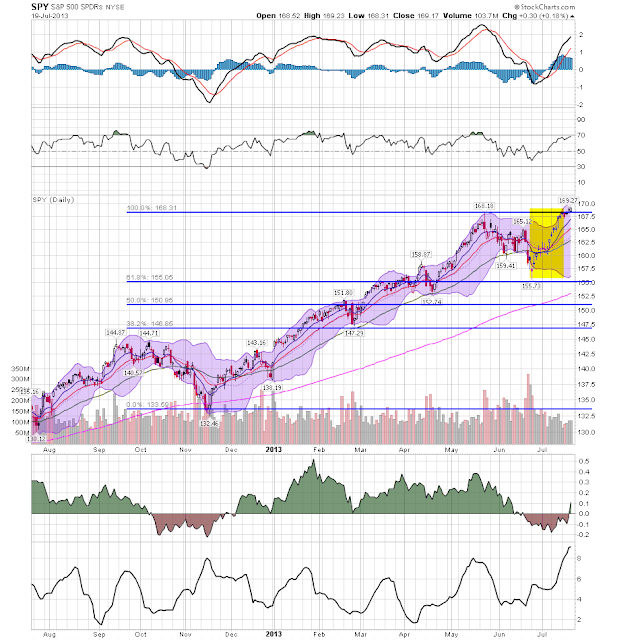 As I pointed out last week, the recent rally is composed of inter-day moves (see bottom daily chart)but very little intra-day movement (see the top 30-minute chart).  Part of the reason for this is the timing; in the summer most traders take vacations, so trading desks aren't nearly as active.  The lower volume readings on the lower chart show this in more detail.

However, a higher move is likely at this point largely because of the huge money inflow into the market:

Some $19.7bn was invested in global equity funds in the past week, the most for six months, while $700m was pulled from bond funds, according to figures from EPFR, which tracks mutual funds and exchange traded fund flows.
The $17.5bn flowing into US equity funds was the most since June 2008. Around $6.5bn of this went into State Street Global Advisors’ popular “Spider” ETF, which tracks the S&P 500 index. 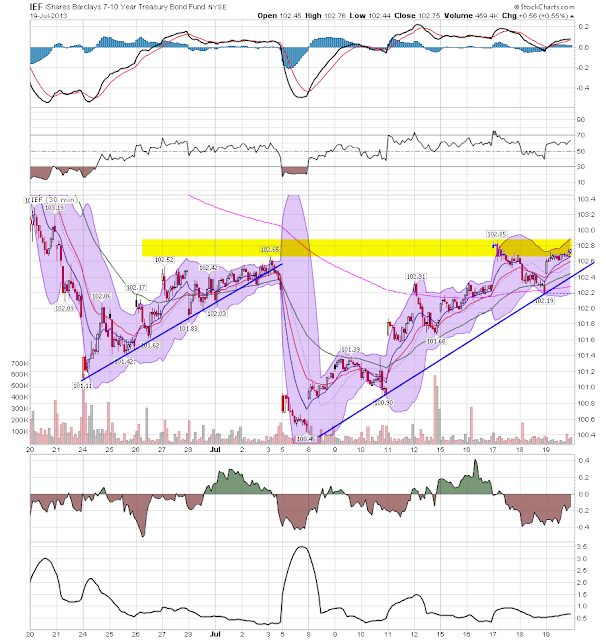 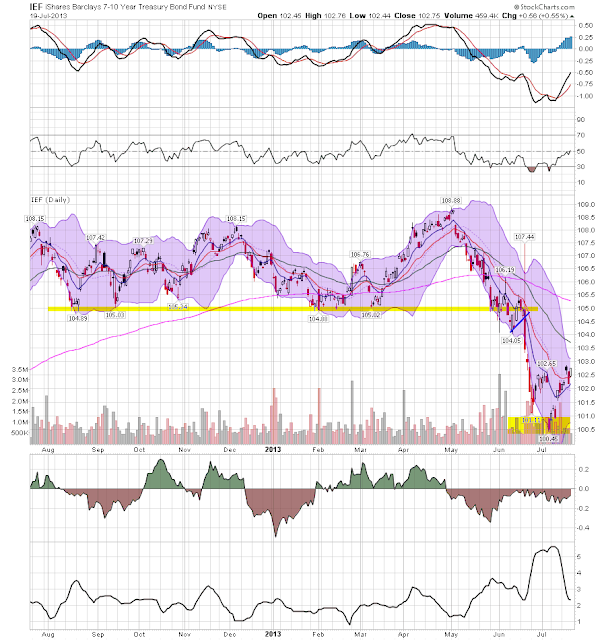 It appears the treasury market has found a bottom and is consolidating losses in the 100.5-102.5 range.  On the daily chart (lower chart) we see a rising MACD (even though it's still in negative territory) and a rising 10 day EMA.  The 30 minute chart (top chart) shows that after bottoming in the around 101, prices rallied to the 102.65 level.  Then we see a second drop to 101.5 only to rally again to the current 102.5 area.  As I point out last week, it appears that the 2.5% yield handle is an attractive yield for foreign central banks. 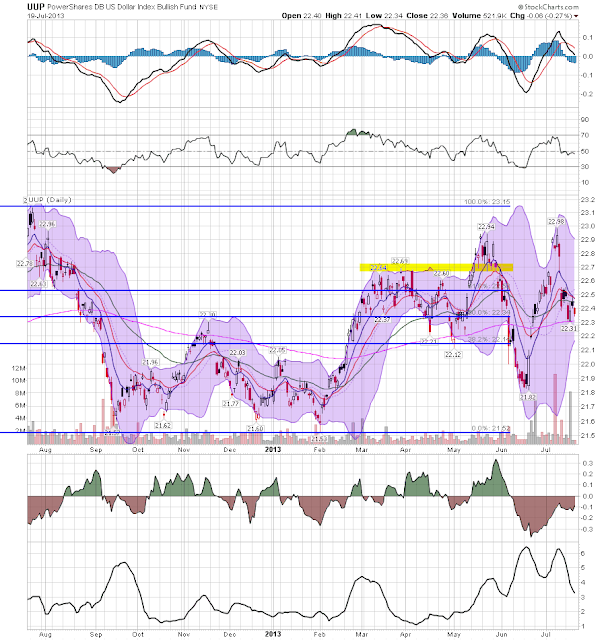 The dollar ETF found support at the 200 day EMA this week.  But it's still in an overall range.