I've written previously that I'm bearish on the Indian economy (see here and here).  They're got numerous problems -- an incredibly poor infrastructure, a terribly bloated and inefficient government, lower overall growth and high inflation.  All in all, it's not a very promising picture from a short or medium term perspective, barring a big change in the way the government regularly goes about its business.

Let's turn to the decision by the central bank and it's statement on release of the news of the change in rates:

10. Today’s decision to further cut the repo rate carries forward the measures put in place since January last year towards supporting growth in the face of gradual moderation of headline inflation. Nevertheless, it is important to note that recent monetary policy action, by itself, cannot revive growth. It needs to be supplemented by efforts towards easing the supply bottlenecks, improving governance and stepping up public investment, alongside continuing commitment to fiscal consolidation.

11. Upside risks to inflation in the near term are still significant in view of sectoral demand supply imbalances, the ongoing correction in administered prices and pressures stemming from increases in minimum support prices. In view of this, monetary policy cannot afford to lower its guard against the possibility of resurgence of inflation pressures. Monetary policy will also have to remain alert to the risks on account of the current account deficit (CAD) and its financing, which could warrant a swift reversal of the policy stance.

Translating out of central bank speak we get the following points.
Here is how the bank described the India economy :

16. Moving on to the domestic economy, with output expansion of only 4.5 per cent inthird quarter of last year, the lowest in 15 quarters, cumulative GDP growth for the period April-December 2012 declined to 5.0 per cent, down from 6.6 per cent a year ago. This was mainly due to the protracted weakness in industrial activity aggravated by domestic supply bottlenecks, and slowdown in the services sector reflecting weak external demand.

17. The Central Statistics Office (CSO) put out the advance estimate of GDP growth for last year, 2012-13, of 5.0 per cent, lower than the Reserve Bank’s January 2013 baseline projection of 5.5 per cent. The CSO’s lower estimate reflects slower than expected growth in both industry and services.

18. Looking ahead, economic activity during the current year is expected to show only a modest improvement over last year, with a pick-up likely only in the second half of the year. Agricultural growth could return to trend levels if the monsoon is normal as recently forecast. The outlook for industrial activity remains subdued because the pipeline of new investment has dried up and existing projects remain stalled by bottlenecks and implementation gaps. Growth in services and exports may remain sluggish too, given that global growth is unlikely to improve significantly from 2012. Accordingly, the Reserve Bank’s baseline projection of GDP growth for 2013-14 is 5.7 per cent.
The bank's discussion about inflation had the following points:

19. Let me now turn to inflation. Headline inflation, as measured by the wholesale price index (WPI), moderated to an average of 7.3 per cent last year from 8.9 per cent in the year before. The easing was particularly significant in the fourth quarter of last year. We ended the year with WPI inflation of 6.0 per cent in March 2013, the lowest in the last three years.

20. Even as headline inflation eased, there were upside pressures on food inflation through the year owing to an unusual spike in vegetable prices early in the year followed by rise in cereal prices.

22. Non-food manufactured products inflation ruled above the comfort level in the first half of 2012-13 but declined in the second half, reflecting easing of input price pressures and erosion of pricing power.

23. Even as WPI inflation eased, retail inflation, as measured by the new consumer price index, averaged 10.2 per cent during 2012-13, largely driven by food inflation. Even after excluding food and fuel groups, CPI inflation remained sticky, averaging 8.7 per cent.

24. In the Reserve Bank’s assessment, WPI inflation is expected to be range-bound around 5.5 per cent during 2013-14. This assessment factors in the domestic demand-supply balance, the outlook for global commodity prices and the forecast of a normal monsoon.

25. It is critical to consolidate and build on the recent gains in containing inflation. Accordingly, the Reserve Bank will endeavour to condition the evolution of inflation to a level of 5.0 per cent by March 2014.

Notice how non-core inflation (food and energy) is starting to bleed into core inflation -- notice the description of inflation as "sticky" in point number 23.  This would be a great concern to any central bank and is a primary reason why the bank doesn't have a great deal of room to lower rates further.

Let's turn now to the chart of the India ETF: 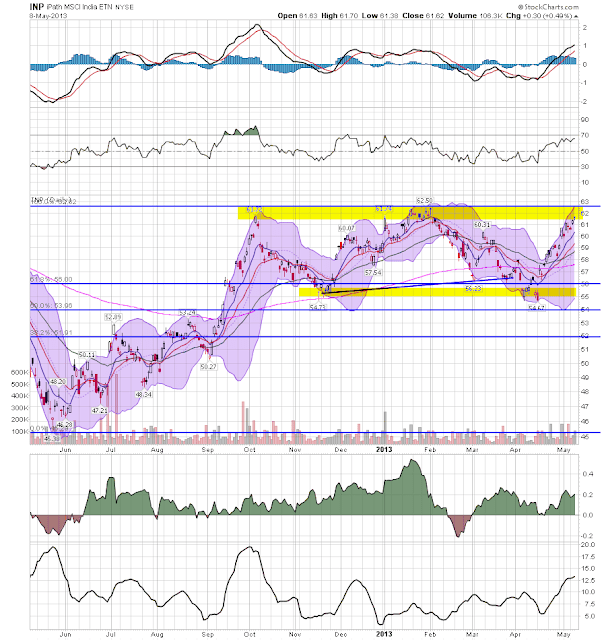 The chart really hasn't meaningfully moved in the last 6 months, trading between 55 and 62 -- a roughly 11% range.  Over that time frame, we've seen very little meaningful movement in the MACD which has been flat for a majority of the time.  Volume flow into the ETF is still positive, however.

Obviously a break about 62 or below 55 would be the key developments to this chart moving forward.