The oil choke collar is always a constraint

I keep harping on the oil choke collar because it is something that is always going on, at least in the background. We certainly continue to have major and ongoing problems with average consumer households being worse off than they were 15 years ago, with the continuing need for households to deleverage, and with virtually all of the productivity gains in the economy going to corporate suppliers and not being shared with workers at all. But the constriction of sharply elevated energy prices is another long term negative trend.

Here are a couple of graphs to remind you just how negative it has been.

In this first graph, the price of gasoline is normed to 100, both in 1973 right before the first energy crisis, and again at its low point in early 1999: 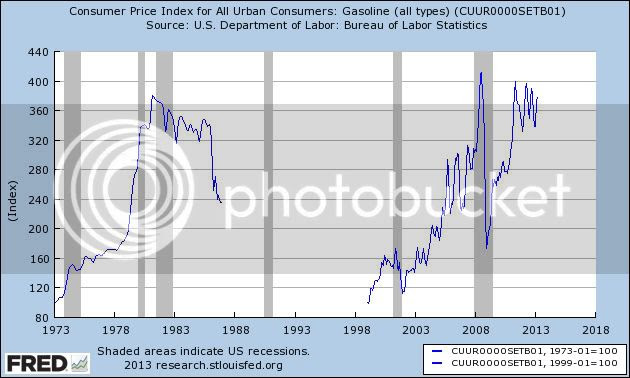 You can see that the price of gasoline had a similar trajectory on both occasions, rising to about 4 times its original cost, in about 7 years in the 1970's, and in about 9 years at the turn of the Millenium.

The second graph takes this same information, normed at 100 in 1973, for the entire duration since, and divides it by average hourly earnings to show how expensive gasoline is per unit of labor: 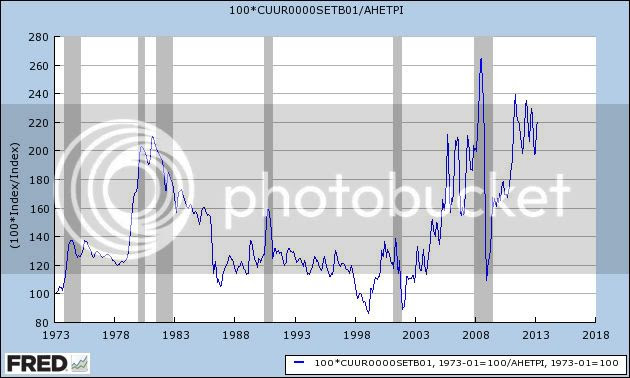 The impact of gasoline prices on the average wage earner was even more drastic in the run-up last decade than it was in the dismal 1970's. And that impact has continued at a level even worse than the 1970's right up until the present.

Ultimately OPEC lost control of the market in 1986. While I am confident that the oil choke collar will loosen, I doubt we'll ever get back to the levels of the 1990's. More likely substitute sources of energy will continue to make inroads. And I can't at all be sure whether the decline in prices we've seen this spring heralds a secular change or is just a brief respite.
Posted by New Deal democrat at 12:30:00 PM