An updated look at the long leading indicators

It's been a really slow news week, so now is a good time to step back and update a look at the long leading trends In the economy.  These are the four long leading indicators Prof. Geoffrey Moore identified in the 1990's just before he founded ECRI.  Each of these tends to peak more than one year before the economy as a whole does, and in particular before industrial production, spending, and payrolls turn.

In the graphs below, the last 5 years for each indicator - housing permits, corporate profits, real M2 money supply, and yields on BAA corporate bonds (inverted) are shown in blue, with the last 18 months highlighted in red. 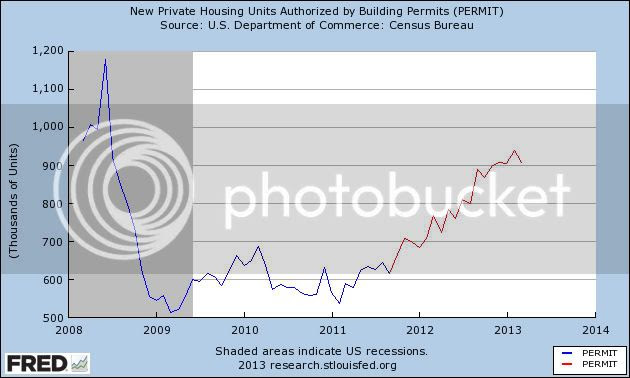 These started rising about two years ago and have remained in a strong uptrend over the last 18 months,

Next, here are corporate profits after taxes.  The first quarter of this year hasn't been added yet, but since we are mainly concerned with 12+ months ago, the relevant trend still shows: 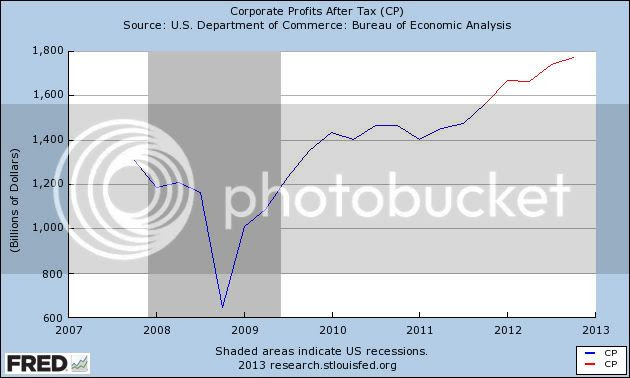 Corporate profits have risen to all time highs. 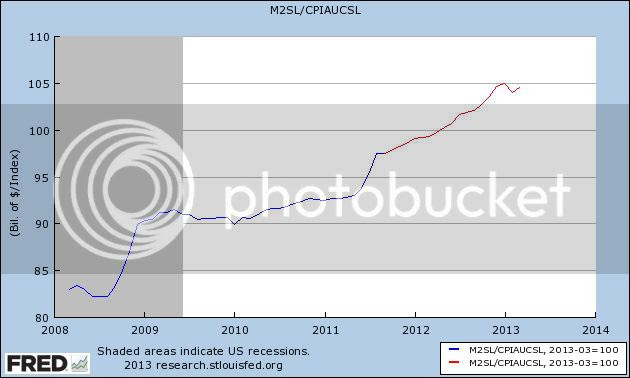 Real money supply has also been rising sharply over most of the last few years with several exceptions.  Because recessions have occured when real M2 has slipped below +2.5%, here is the YoY% growth in real M2 minus 2.5%: 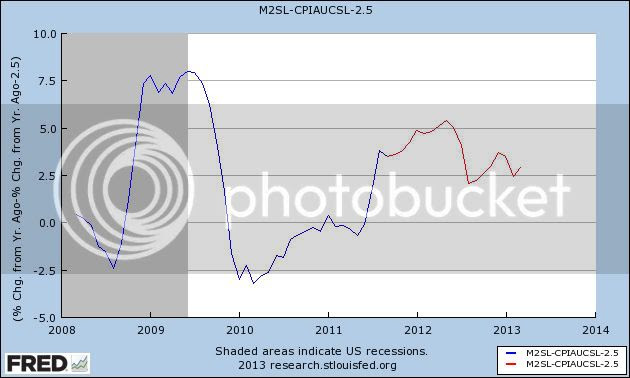 Real M2 did fall into the recession warning area in 2010 and early 2011, but that signal is now waning.

The last of Moore's  four indicators is inverted yield on corporate bonds: 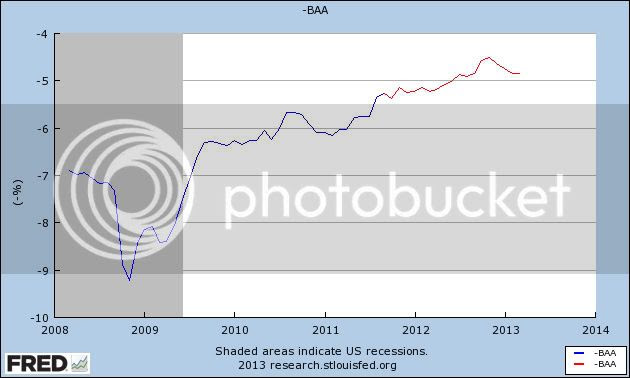 In summary all four long leading indicators signal that, left to its own devices (i.e., without idiotic austerity imposed by Washington), the economy and with it payrolls and consumer spending, should continue to be positive this year.

Despite the above, there are two very big flies in the ointment.  The first, of course, is that Washington hasn't left the economy to its own devices.  Consumers have been forced to stump up an additional 2% of their pay due to the expiration of the payroll tax cut; and austerity via sequestration has been added on top of that.  The two times in the past when many leading indicators gave the least warning is when the Arab oil embargo was imposed in late 1973 and the economy almost immediately went into recession; and when the recovery from the 1980 recession was strangled by the Fed's sharp and abrupt increase in interest rates. 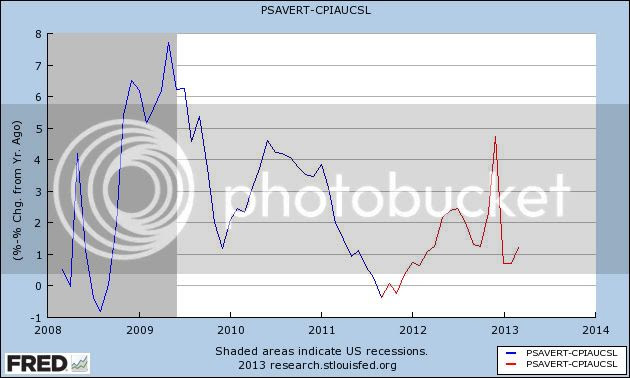 The real personal savings rate tends to be a very long leading indicator.  It can remain low for a long period of time, but once consumers worry that the must save more, a recession typically occurs.  Both warnings from this indicator have been triggered - it has fallen more than 5%, and it is close to zero.  The increase that began 18 months ago is probably feeding through the economy now.

While none of the other long leading indicators have rolled over, several - permits, Baa corporates - have hit soft spots, and bear watching more closely.
Posted by New Deal democrat at 10:00:00 AM