Are affluent democrats boosting the economy?

The title of this post isn't a partisan statement. It actually seems to be a fact that there has been disproportionate spending particularly by more affluent democrats for about the last half year, that has given a boost to the economy.

Let me lay out my thought process. Yesterday David Atkins of Digby's blog put up a post entitled, Things are looking up for the rich as usual. He wrote that:

And as it turns out, the economic confidence of the wealthy is soaring.

Sure, everyone else still thinks the economy is terrible. But what do those middle-class moochers matter? The people whose homes in the Hamptons depend on a soaring stock market are doing fabulously. That's all that counts, right?

Now, about 90% of the time I agree with the political material David posts. But this is a classic example of what I wrote about on Sunday, whereby some in the left blogosphere conflate "the top 20%" (in Gallup's case, at a $90,000 cutoff as we'll see below, about the top 25%) with Wall Street Brahmins like Jamie Dimon. As I noted Sunday, "the top 20%" frequently go by the names of "mom and dad." According to a recent report by the Census Bureau the median stock ownership by households age 55 to 64 is about $25,000. For households age 65 and above, the median is about $50,000.

Still, I was curious as to what he was referring, so I clicked through to find this story and this accompanying poll of economic confidence from Gallup: 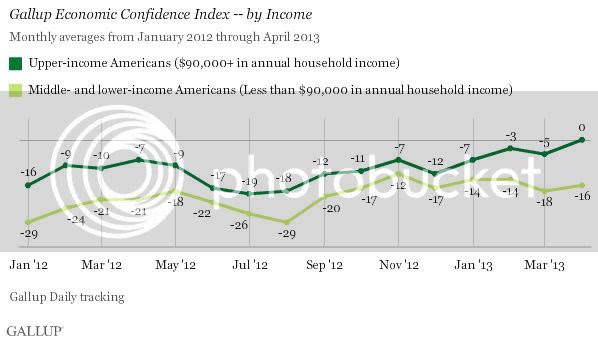 So the first thing I noticed is that the dividing line between upper income consumers and the rest is $90,000 annual income. David lives in southern California, so he may not be aware, but the only way somebody with a $90,000 income is getting into a home in the Hamptons is as a caterer or landscape contractor.

But the next thing that got my attention, being a total data nerd, is that big spike upward in the confidence of the lower 75% back in September 2012, that continued upward through November and seems to have had a lasting effect. So I did some searching of archived Gallup reports, and lo and behold, Gallup found a very specific reason for that spike:


Because the Gallup Economic Confidence Index is based on daily tracking of consumer attitudes, we can pinpoint the day that confidence increased. That day was Sept. 4, the first night of the Democratic National Convention. [NDD note: the night of Bill Clinton's keynote address] After averaging -27 in August, and registering -28 on Sept. 3, the Gallup Economic Confidence Index jumped to -18 on Sept. 4, and has mostly remained at or near that improved level.

Because Gallup Daily tracking includes political questions as well as economic ones, we can analyze whose confidence changed in an effort to understand why it changed. The data show that the rise in confidence this month has been almost exclusively due to soaring optimism among Democrats and independents who lean Democratic.

And indeed, while they didn't this month, usually Gallup also includes a breakdown of economic confidence by party affiliation. Here it is from one month ago: 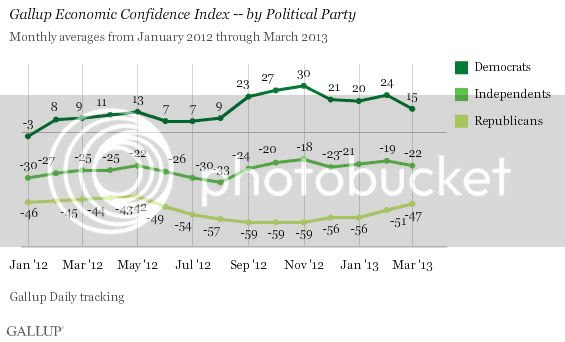 Note that democrats have been positive about the economy since the beginning of 2012, and moreso ever since the democratic convention in September. So in fact David is wrong: "everybody else" besides the top 25% doesn't think the economy is terrible. Democrats in general are positive - a bigger determinant of being positive than having an affluent income.

And although there's no smoking gun, it seems likely that that confidence has translated into spending. Here I believe David is correct: the rising stock market is having an effect (specifically, a "wealth effect"). Anecdotally in the last few months I've heard (older middle class) people discussing how their 401(k)'s are doing - for the first time since before the great recession. And a few graphs of the S&P 500 suggest that's very much the case. 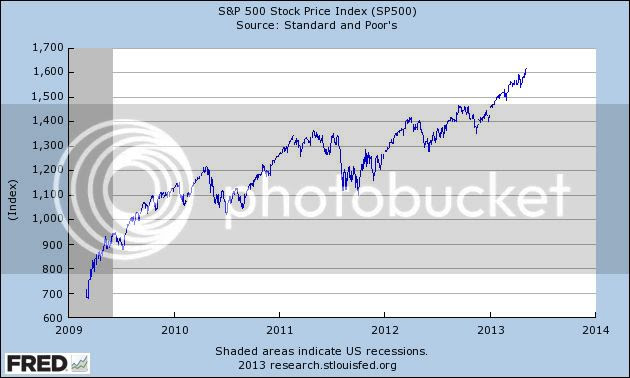 But to see the reason for the wealth effect, looking at the S&P 500's YoY% growth shows it better: 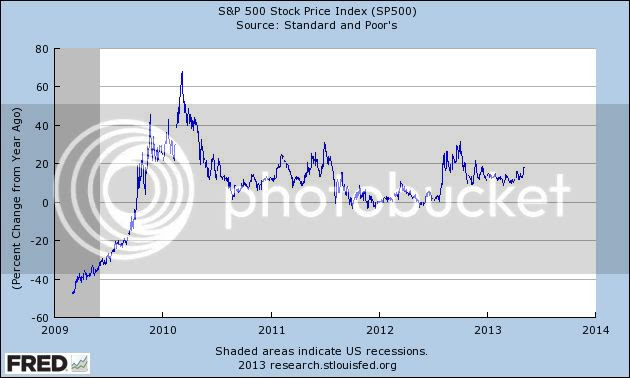 After spending 2 years barely ahead YoY, since last summer the S&P has not just been rising, but it has consistently been up 10% or 20% YoY. 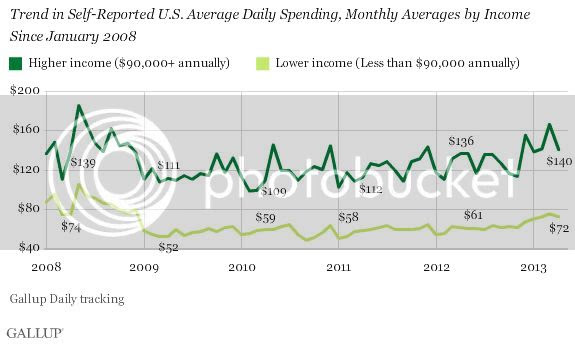 Consumer spending really started to pick up especially for higher but also for lower income consumers in late November, after the stock market had made impressive gains, as it was beginning to close in on its old 2007 records, and just after Obama got re-elected. By Gallup's measure, it has remained strong all through the first 4 months of this year, despite the payroll tax increase, and despite sequestration.

Hence the title of this post, and why it isn't a partisan comment at all. Correlation is not causation and all that, but it does seem likely that democrats, especially affluent democrats, have played a disproportionate role in boosting the economy ever since Bill Clinton's stemwinding speech on the first night of the democratic convention.
Posted by New Deal democrat at 11:00:00 AM