Hey all -- this is Bonddad.  I'm back after vacation.  First, many thanks to NDD for the fine work he did while I and the Bondspouse vacated in San Francisco for a week.

During my time off, there was plenty of economic news which I'll be catching up on.  Let's start with some of the big news from yesterday -- Australia's dropping its rates 25 basis points.  First, remember that I'm bearish on the Australian economy as I've noted several times (see this link).   The big reason is they're dependent on Chinese growth for most of their growth.  So as China rebalances their economy, Australia should see a decrease in growth.

Here are the important points from the bank's interest rate decision:

Growth in Australia was close to trend in 2012 overall, but was a bit below trend in the second half of the year, and this appears to have continued into 2013. Employment has continued to grow but more slowly than the labour force, so that the rate of unemployment has increased a little, though it remains relatively low.

With the peak in the level of resources sector investment likely to occur this year, there is scope for other areas of demand to grow more strongly over the next couple of years. There has been a strengthening in consumption and a modest firming in dwelling investment, and prospects are for some increase in business investment outside the resources sector over the next year. Exports of raw materials are increasing as increased capacity comes on stream. These developments, some of which have been assisted by the reductions in interest rates that began 18 months ago, will all be helpful in sustaining growth.

Australia's central issue -- as with China -- is a need to diversify their overall economy.  Over the last 10 years, Australia's primary economic growth has come from exporting raw materials to China.  But as China has slowly started to move their growth model to one that is more driven by internal demand, raw material exporters like Australia have to change their respective growth models.  But turning an economy in a different direction is a bit more difficult than you'd think, hence my bearishness on Australia.

There are a few more data points from Australia over the last few weeks that should be highlighted.

First, retail sales dropped .4% month to month on a seasonally adjusted basis.  From the report:
Overall, we see an decent increase over the last few months in this metric.

Total housing permits issued has been decreasing:
Here's a chart of the relevant data:

And we also have this from the Conference Board:

The Conference Board LEI for Australia increased again in February for the second consecutive month, with rural goods exports and stock prices making the largest positive contributions to the index. The leading economic index has been flat over the six months between August 2012 and February 2013, an improvement over its decline of 1.1 percent (about a -2.3 percent annual rate) during the previous six months. Additionally, the strengths and weaknesses among the leading indicators have become balanced in the last six months.
The Conference Board CEI for Australia, a measure of current economic activity, also increased in February. In the six-month period ending February 2013, the coincident economic index increased by 0.5 percent (about a 1.0 percent annual rate), down from the 0.9 percent increase (about a 1.8 percent annual rate) for the previous six months. Nevertheless, the strengths and weaknesses among the coincident indicators have been fairly balanced in recent months. Meanwhile, real GDP increased at a 2.4 percent annual rate in the fourth quarter of 2012, slightly down from the 2.6 percent (annual rate) in the third quarter of the year.

The LEI for Australia increased again in February, and its six-month change emerged from negative territory for the first time in more than a year. Meanwhile, the CEI also increased in February, and its six-month grow rate has improved somewhat from the second half of last year. Taken together, the recent improvement in both the LEI and CEI and their components suggests that the economy should continue to grow at a steady pace.

However, consider that news in context: 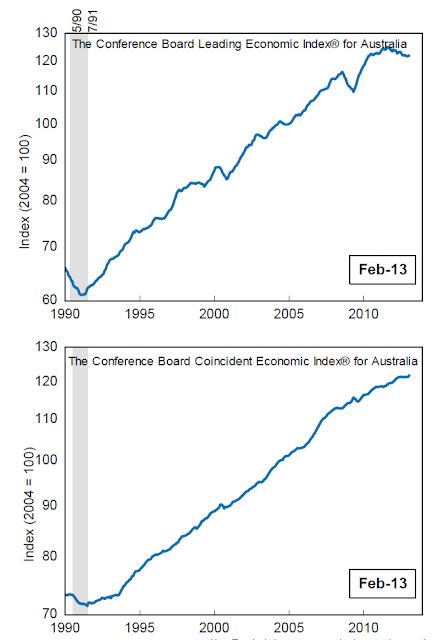 The overall trend in the LEIs is still down.  The coincident indicators have been level for a bit with only the recent increase to show economic expansion. 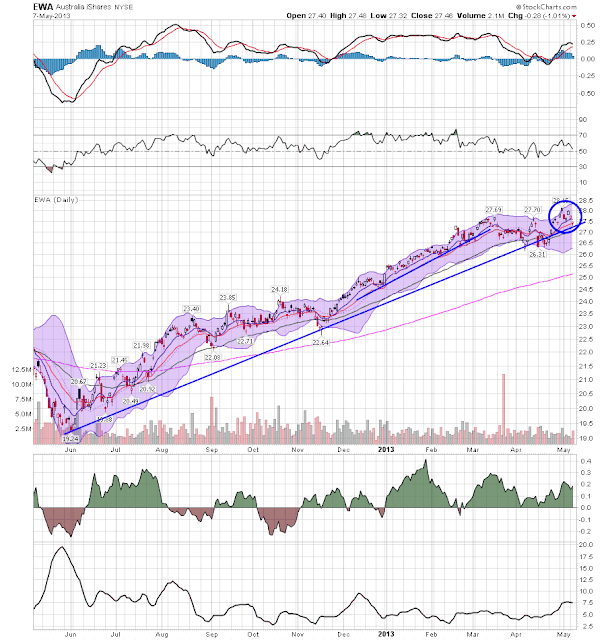 And finally notice that while the overall uptrend of the Australian ETF is still intact, the market has not been making new highs with the rest of the world.

The fact that the bank lowered rates indicates they're concerned about the economy's growth prospects enough to continue goosing growth forward.  That should tell us a great deal about the future.  And while we've seen some positive numbers (retail sales and the LEIs), I still think that the need to rebalance their economy from raw materials to consumer led growth will be more difficult than they anticipate.