It occurred to me during this past week that I hadn't bothered to check for any new iterations of their recession calls by the usual suspects. That, together with the Reinhardt and Rogoff ridicule-a-palooza, caused me to realize that Gandhi's famous quote, "First they ignore you, then they ridicule you, then they fight you, then you win" works just as well to describe enusing events, too: "First you win, then you fight with them, then you ridicule them, then you ignore them" is just as true.

In any event, this morning's report of +2.5% GDP growth in the first quarter of this year is the umpteenth sign that the economy didn't enter recession in summer of 2012 as certain people claimed. Despite the imposition of the 2% increase in payroll taxes at the beginning of January, and despite the onset in March of the Sequester that Washington's Very Serious People claimed was so onerous that it would never be allowed to take effect, the economy still grew.

And while it may be true that neither GDP nor the stock market are valid measures of how the average American is doing, the fact is that I would always prefer a rising GDP and a rising stock market to a declining GDP and/or a declining stock market. The stock market rises because it is anticipated that the economy will continue to grow, and the GDP is evidence that the economy is indeed growing. In other words, the pie is getting bigger. The vast mass of Americans are not going to see their lot improve if the pie is shrinking. A rising GDP is not sufficient for the betterment of most Americans' lot, it is a necessary condition. If the pie is growing, then the question becomes whether the 100,000,000+ American households are meaningfully sharing in that growth.

One year ago, the economy grew at a rate of +2.0%. This morning's news means that the YoY growth in the economy increased from 1.4% to 1.7%. This is simply not an economy that, left to its own devices, is entering a recession.

On the other hand, it remains an economy that is not growing enough. In general, historically have needed +2.0% annual GDP growth to generate reliable job growth. Each 1% growth in the economy above that generates about 1% additional job growth as well, more or less. So here we are, over half a decade after the onset of the "great recession," still running over 5% less than what we need on a population-adjusted basis to return to full employment, and at the paltry rate the economy is growing, it is never going to happen.

And the next recession is already lurking out there somewhere. Maybe somebody should do something?

Bonddad here, chiming in on the GDP report.

There are s few important points from today's report.  The first is that consumers are still spending:

Those are solid numbers, especially in the durable goods area. 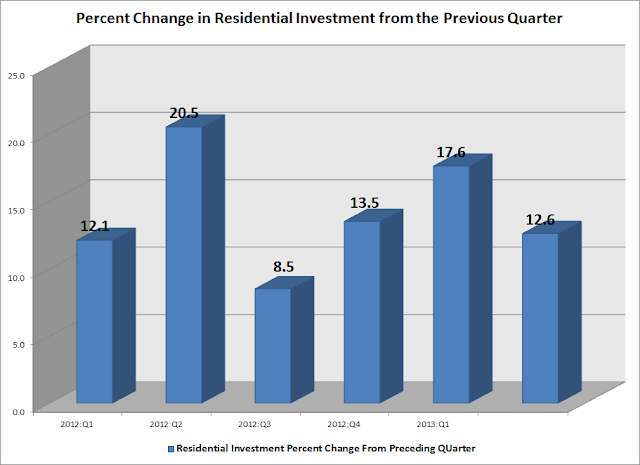 Those are impressive numbers over 6 quarters.

Finally, consider this chart which shows the contributions to the percentage change in GDP: 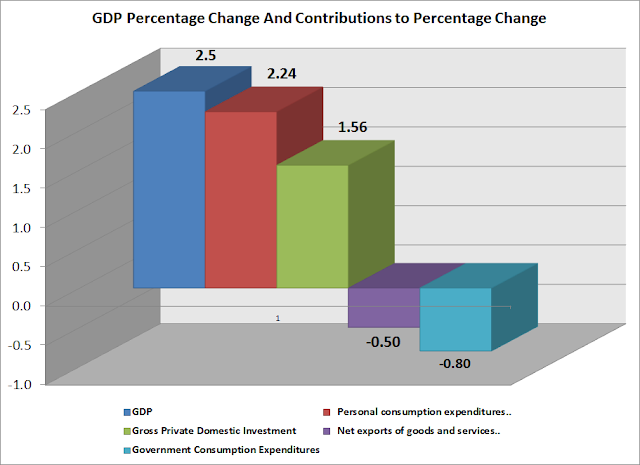 PCEs and investment contributed nicely.  We're back to being a net importer -- which actually indicates a strong level of domestic demand.

However, the real culprit here is the decrease caused by government spending.