Is the US Economy Moving Into A Higher Growth Phase? Part II; The Negative

Yesterday, I looked at three reasons why the US economy might be moving into a higher growth mode.  I did this analysis to essentially argue with a previous conclusion I came to hat argued for slow growth going forward.  The three areas of the economy that I highlighted yesterday -- housing, auto sales and manufacturing -- could provide strong growth going forward, possibly kicking GDP growth into a higher gear.  However, there are two decidedly negative developments at the national level which are going to hurt growth.  Unfortunately, both emanate from Washington.

As of Jan. 1, the payroll tax that funds Social Security was raised two percentage points to its 2010 level of 6.2 percent. It is also by far the biggest component—$125 billion of the $190 billion—in tax increases approved by Congress to fend off a bigger wave of tax hikes from the "fiscal cliff."

The basic problem with this situation is that consumers on whole have seen paltry wage gains during this expansion.  Consider this chart from the St. Louis Fed: 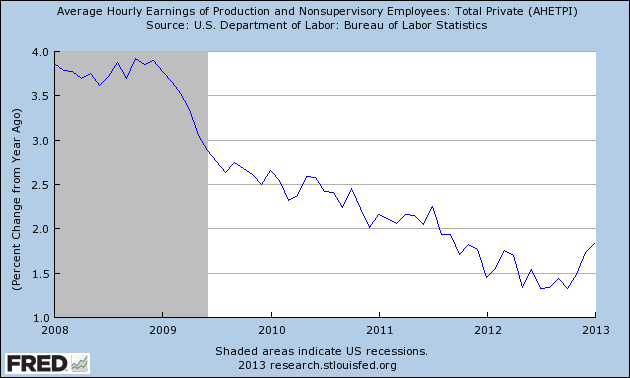 The year over year percentage change in average hourly earnings of production workers have been declining for the duration of this expansion.  This decline is to be expected when unemployment is still at 7.9%, leading to no upward wage pressures.

Under standard IS/LM analysis, an increase in taxes leads to a decrease in spending, and hence, national income.

First, what is the sequester?

It’s a package of automatic spending cuts that’s part of the Budget Control Act (BCA), which was passed in August 2011. The cuts, which are projected to total $1.2 trillion, are scheduled to begin in 2013 and end in 2021, evenly divided over the nine-year period. The cuts are also evenly split between defense spending — with spending on wars exempt — and discretionary domestic spending, which exempts most spending on entitlements like Social Security and Medicaid, as the Bipartisan Policy Center explains. The total cuts for 2013 will be $109 billion, according to the new White House report.

Under the BCA, the cuts were triggered to take effect beginning Jan. 1 if the supercommittee didn’t to agree to a $1.2 trillion deficit-reduction package by Nov. 23, 2011. The group failed to reach a deal, so the sequester was triggered.

As people who read this blog regularly are well aware, a drop government spending leads to a drop in GDP.  We saw this last quarter with the impact of a drop in defense spending.  We've also seen this hit the UK, which has been engaging in austerity for the last few years having little success.

Under standard IS/LM analysis, a drop in government spending leads to a drop in GDP.

Thanks to the idiots in Washington, it appears that we have macro-level policies that are counter-productive to the economy as a whole.  This at a time when the economy wants to move into a higher growth mode.