Is the US Economy Moving Into A Higher Growth Phase? Part I; the Positive

I wrote a four part series last week discussing the possibility of a new bull market opening up.  While the technical side of the markets favored the bulls, I was deeply concerned that the overall economic environment was too negative to support a strong move higher.  Here was my conclusion:

To sum up the national and international position, I just don't see strong enough overall growth in any economy to warrant a strong long position right now.  The best reading of the data is that we'll see a stronger second half, with the US housing market providing sufficient domestic stimulus combined with a more settled fiscal situation.  This would also allow the EU to continue strengthening or bottoming. The stronger second half argument leads could lead into the fact that the market is a leading indicator of anticipated future activity -- a fair point as far as it goes, but I just don't see the overall underlying strength to support the rally long term.

Then came Friday's move higher, which led me to question my analysis yet again.  Over the weekend, I realized that my conclusion was based on a macro reading of other world economies, and not the fact that the US being the largest world economy could achieve a level of growth sufficient to propel it beyond the 2% GDP growth rate we've seen for the last few years.  In addition, for the last few years I've been wedded to an analysis that calls for US growth between 0%-2% (an analysis that has been mostly correct).

So, as a thought exercise, let's look at a few data points that support the idea the US is about to move into a period of higher growth.

If any sector can help to move the economy into a higher gear, it's housing, largely because it provides a tremendous multiplier.  When a house is built, it requires a large amount of raw materials converted into useful items (wood, copper, etc..).  There is also a decent amount of labor involved.  Finally, there is a large amount of durable goods that go into a house (furniture and appliances).  All of these factors add up to a decent multiplier for the macro economy as a whole.

For me, the real story of housing is the low inventory levels we're seeing at the macro level, as shown in the following two charts. 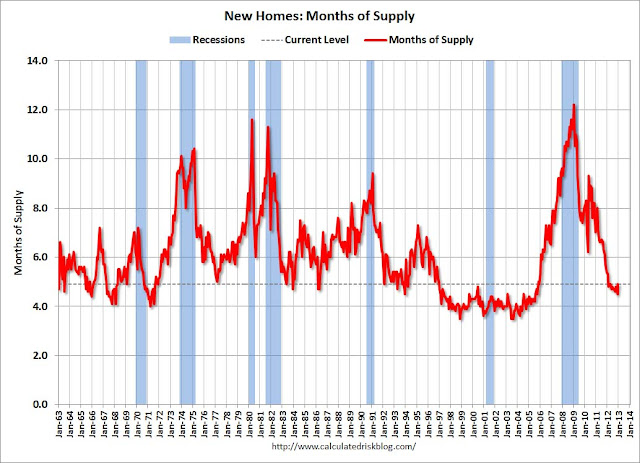 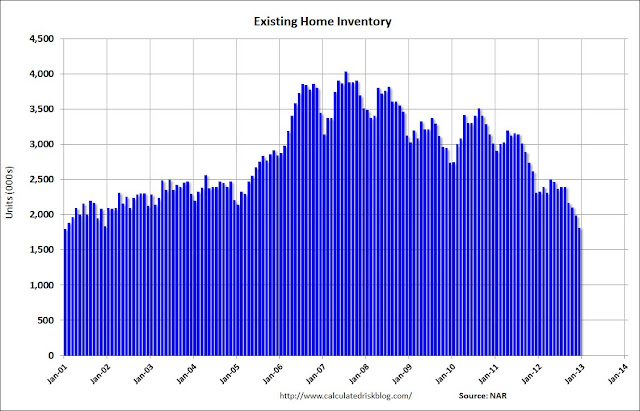 The top chart of new homes inventory shows levels at some of their lowest levels in 40 years, while the lower chart if existing homes shows that levels are now at far more normal levels.  These inventory levels have led to price increases, as shown in the year over year percentage change in the Case Shiller index: 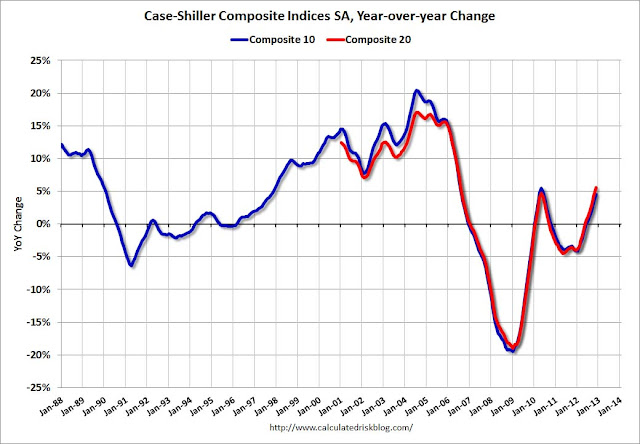 Finally, the low levels of inventory have led to a big increase in new home construction, as shown in the housing starts figures: Although they are coming off a low level, housing starts have clearly picked up and are rising at a strong clip.

In short, housing still remains a big reason why the US economy may kick into a higher growth rate.

Sales of cars and light trucks have been in a strong uptrend since the bottom of the recession. 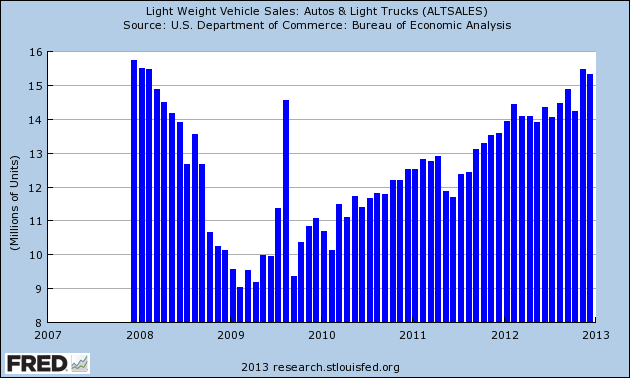 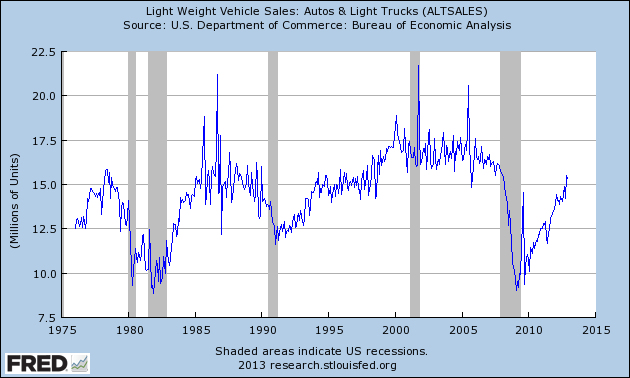 The top chart shows the figures for the last five years.  While we do have some dips in the figure, the overall upward trend is clear.  The longer chart (lower chart) puts the action in overall historical context.  The drop in activity during the Great Recession was the sharpest we've seen since 1980.  But now overall figures are at levels seen with the mid-1990s expansion.

The reason for the importance of auto sales is, like housing, they have a decent multiplier effect on the economy.  There are still a fair number of employees in this industry -- especially in the industrial Midwest -- the the process of making a car still requires a large amount of ancillary activity.

The strongest evidence of a manufacturing resurgence is found in the latest ISM report, issued last week.


The report was issued today by Bradley J. Holcomb, CPSM, CPSD, chair of the Institute for Supply Management™ Manufacturing Business Survey Committee. "The PMI™ registered 53.1 percent, an increase of 2.9 percentage points from December's seasonally adjusted reading of 50.2 percent, indicating expansion in manufacturing for the second consecutive month. The New Orders Index registered 53.3 percent, an increase of 3.6 percent over December's seasonally adjusted reading of 49.7 percent, indicating growth in new orders. Manufacturing is starting out the year on a positive note, with all five of the PMI™'s component indexes — new orders, production, employment, supplier deliveries and inventories — registering above 50 percent in January."

Simply put, the report above is very bullish.  It shows a broad path of growth over a variety of internal ISM figures (overall index, new orders, employment, supplier deliveries and inventories) along with a majority of industries growing.

The US report is confirmed by the latest Markit report:

The final Markit U.S. Manufacturing Purchasing Managers’ Index™ (PMI™)1 signalled a strong expansion of the U.S. manufacturing sector at the start of 2013. Moreover, at 55.8, below the earlier flash estimate of 56.1 but higher than that recorded in December (54.0), the PMI signalled the fastest rate of growth in nine months.

Here is a chart of Markit's overall figures: 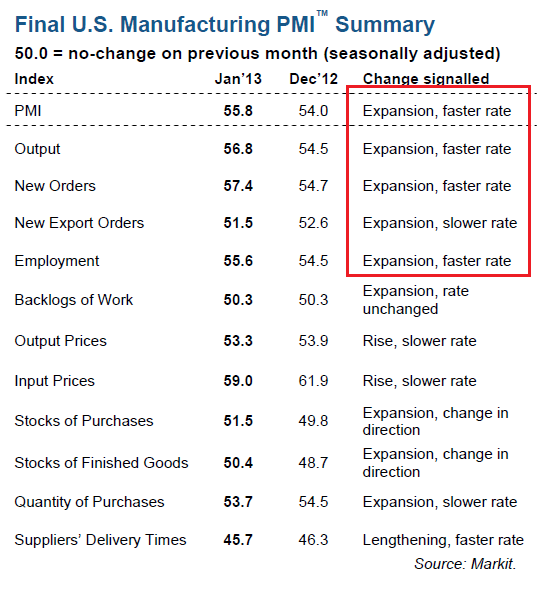 When looking for the reasons of the manufacturing increase, consider these points from the latest ISM report:
The good news in the report is from the housing market.  We see a statement to that effect along with business improvement in furniture and related products and increased orders in wood products.

It is interesting that these reports are not in sync with the regional Fed reports, a situation that I cannot explain.

All three of the above sectors -- housing, autos and manufacturing -- are bedrock components of the economy.  If all three are doing fairly well, the worst that can happen is slow growth.  There is simply too much of a multiplier effect of the combined total for a recession to occur with the above three expanding.

However, this is before we get to the latest and upcoming fiscal follies from the idiots in Washington.  We'll touch on that tomorrow.