Is It Time to Buy Wheat? 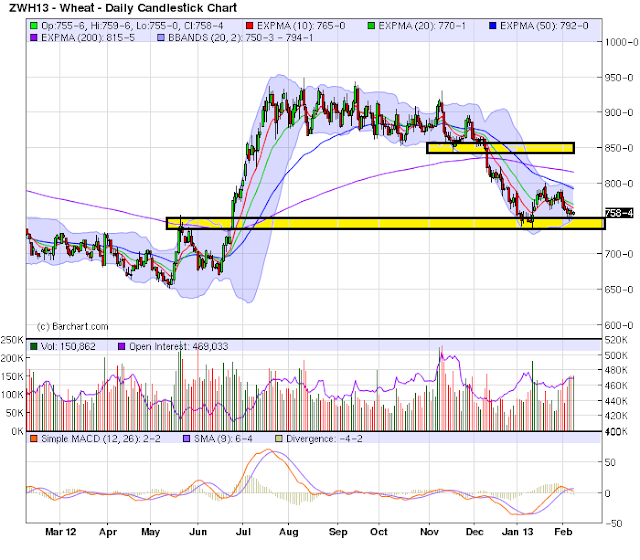 On the yearly chart for wheat, we see the big price move starting in mid-June of 2012, which ultimately shows a move higher of about 21%.  Prices moved sideways for the summer and fall, but eventually moved lower at the end of last year, hitting support in early January.  Prices have been consolidating between the 7.5 and 8.00 a bushel level since.

While fund managers are currently bearish on the crop, consider this key piece of data from the same Bloomberg story:

As of Feb. 5, the U.S. Drought Monitor classified 92 percent of a six-state Great Plains region with soil-moisture levels below 20 percent of normal, including some at zero, with water shortages and crop damage likely.

“The risks to 2013-14 production are still high given the on-going drought conditions in the U.S,” said Erin FitzPatrick, an analyst at Rabobank International in London. “If we do get slightly bearish numbers from the USDA it could continue to push prices lower in the short run, but we think this will open up a buying opportunity.”

Any improvement in consumption may boost demand for U.S. supplies. Wheat on the CBOT is about $1.23 a bushel cheaper than the grain on NYSE Liffe in Paris, compared with a premium of about 71 cents a bushel in July, according to data compiled by Bloomberg.

We're still in a major drought in the area of the country that grows wheat.  Until that changes, I'd be going long wheat right now.