Can you really have a recession if housing, cars, layoffs and stocks won't play?

In assessing the economy, it's dangerous to rely upon any one data series. None are infallible, and there will always be an exception to any rule. Last week's durable goods orders were just awful, and certainly looked like I would expect to see in a recession, but while most manufacturing-related series are flat to declining, the rest of the economy doesn't seem to want to cooperate. There are a whole bunch of important facets of the economy that simply aren't playing along.

We all know that housing is one of the most important - and most leading - slices of economic activity. There has never been a recession without housing declining at least to a small degree months in advance. Well, here's the entire series for housing permits: 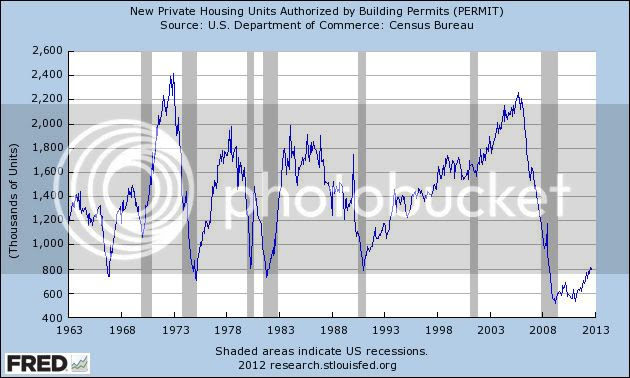 Not only is there no decline, but these have been in a steady rebound for almost two years.

Yesterday it was reported that more cars were sold in September - 15 million on an annualized basis - than at any month in the last 4 years. Here's car sales on a quarterly basis to smooth out noise, for the duration of the series: 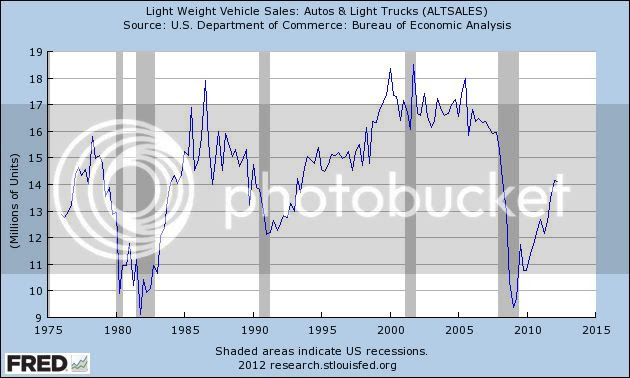 The graph doesn't include the July-September quarter for this year, which averaged 14.5 million annualized. The strong rebound from the 2009 lows continues. At no point has a recession started with car slaes increasing like this.

In recession, increasing numbers of people get laid off. Well, here's the graph of initial jobless claims, averaged monthly to decrease noise, since the inception of the series half a century ago: 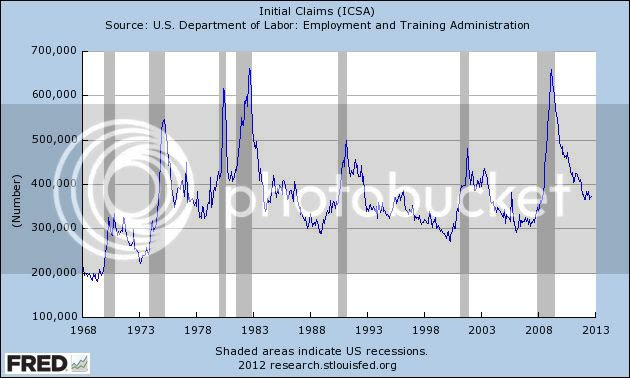 These have almost always increased by about 10% going in to a recession. They are only about 3% off their recovery lows through last month.

Finally, as I pointed out last week, the stock market almost always peaks before the economy does. Here's a log scale graph of that, split over two time periods(1957-80, left log scale, 1980- present, right log scale) to better show the peaks, for over 50 years: 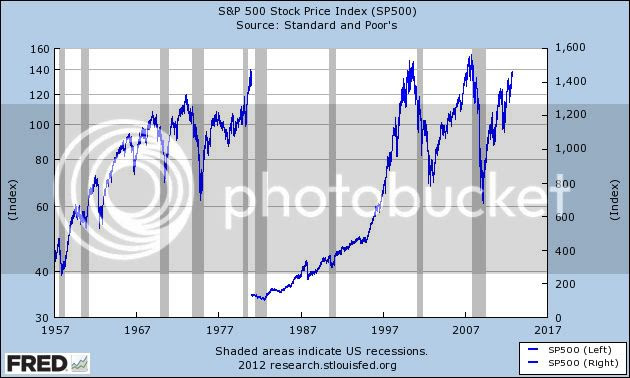 In 1980 and 1990, the market peaked about a month or so after the economy did. Otherwise, from the 1950's on, the stock market has always peaked first. It just made a new peak about 3 weeks ago.

There's no doubt that the crucial coincident indicators of recession hit something of an air pocket in August and a looking flattish for the year. But we have whole swaths of economic activity that simply aren't cooperating with the recession thesis. So, while manufacturing may be contracting as a whole, and while real wages have declined for going on two years now, it's hard to buy the recession thesis while so many aspects of the economy which ought to have rolled over first, simply haven't rolled over at all. The expansion may just barely have a pulse, but housing and cars - typically the most crucial lifebloods of that pulse - are pumping.
Posted by New Deal democrat at 10:00:00 AM