Gas prices and the 2nd half economy

The $.50+ hike in the grice of gas during the third quarter is beating the tar out of my second half 2012 forecast. Back in January, looking at the progress of the Long Leading indicators, and taking into account the normal seasonal rise and fall of gas prices (and therefore the tightening and loosening of the energy choke collar), I figured that the economy would slow to about a stall at some point in the first half. Noting the recent downward revisions in 2nd quarter GDP, and the punk payroll numbers since March, that seems to have been about right.

But I also figured that the slowdown would case a downturn in the price of gas up until the holiday season, and with no debt ceiling debacle prior to election day, the second half of 2012 would see the economy strengthening.

With wage pressures minimal at best, the economic weakness should play out like an old fashioned deflationary bust. Those typically bottom coincident with the YoY rate of inflation bottoming as well. Sure enough, as gas prices declined beginning in May, I figured we would see an inflation rate of only about 1% or less by the end of summer. This would be less than the rate of wage growth. Consumer spending would pick up, and the economy would strengthen again.

Except Oil prices turned right back around and headed to $100 a barrel. I don't profess to know why - speculation? Iran troubles? Refinery closures? - but the result is that I do not believe the period of weakness is over.

Let me flesh this out with a few graphs. First of all, as I have pointed out many times, the issue of US wage stagnation is a crucial long term determinant of the economy. If wages stagnate or decline, then consumer spending must come out of savings, out of asset appreciation (stocks or houses), or refinancing of debt at lower rates. Here is the most recent update, through August, of real wages (i.e., wages minus inflation, both measured YoY): 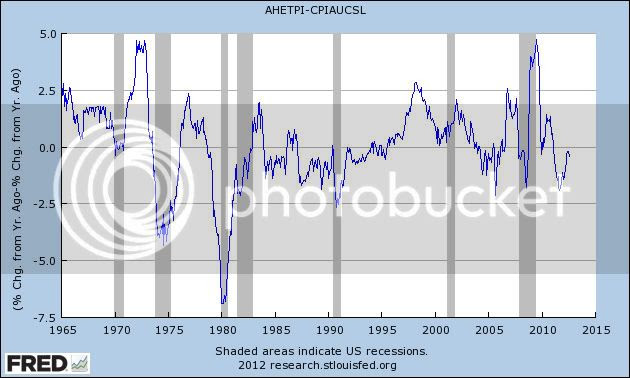 The way to read this graph is to note that a positive number means that YoY wage growth exceeds YoY inflation. A negative number means wages haven't kept up with inflation. During most of the 1980s and early 1990s, wages failed to keep up with inflation -- but with women continuing to enter the workforce, household buying power continued to increase, aided and abetted by a rising stock market and decreasing mortgage rates (meaning, with the exception of just before the 1990 recession, the continual ability to refinance debt at lower monthly payments). Similarly, in the mid 2000s, rising house prices and decreasing mortgage rates meant that purchasing power could be extracted from home equity and from refinancing. That all fell apart in 2006 and 2007.

Since the beginning of 2011, wages have failed once again to keep up with inflation. As middle class assets have been depreciating during most of that time, the only avenues available for increased spending have been refinancing of debt, and digging into savings (as to which a huge sum was accumulated during the last recession). Notice also that unlike each and every recession shown in the graph, real wages have failed to break above zero. So long as that is the case, weakness - or worse - will continue.

So why hasn't inflation declined further? I blame the recent surge in gas. Here's a graph of inflation ex-energy for the last 24 months. The blue bars are the monthly percentage changes for the first 12 months. The green (red) bars show an increase (decrease) in the monthly prices compared with the same month 1 year earlier. 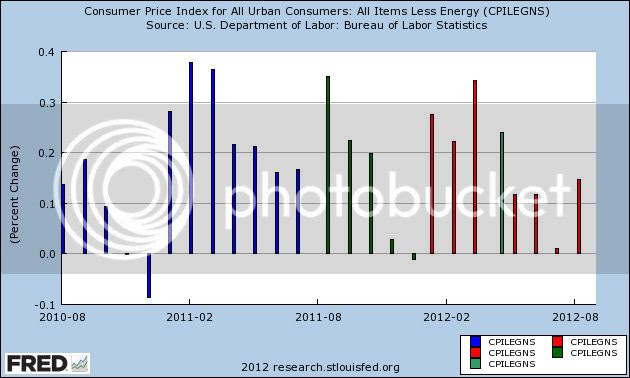 You can see that ex-energy, the rate of inflation has declined each and every month except for one this year.

Now here is the same graph, including energy as well. 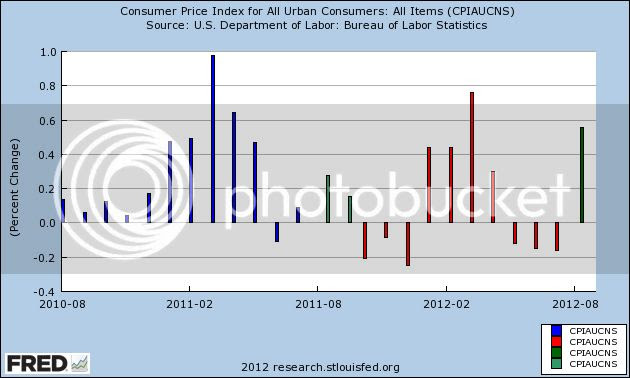 The YoY rate of inflation began to decline last October, but then spiked again in August of this year. I expect the spike to continue when September CPI is reported as well.

So what does this mean? It means that the economy will continue to be weak, or even contract, until sufficient demand for gasoline is destoryed so as to cause YoY inflation to turn and to remain significantly under YoY wage growth (which is becoming ever more non-existent) long enough for consumers to be able to spend more safely.
Posted by New Deal democrat at 2:00:00 PM