Will We See Second Half Economic Improvement? Pt. 1

Last week, the Washington Post ran an article titled, Economy Might Be Gaining Traction, New Data Suggest.  The article highlights recent developments in exports, housing and employment as the reasons for enthusiasm.  This week, I'm going to look at some of the points made in the article to see if they're valid. 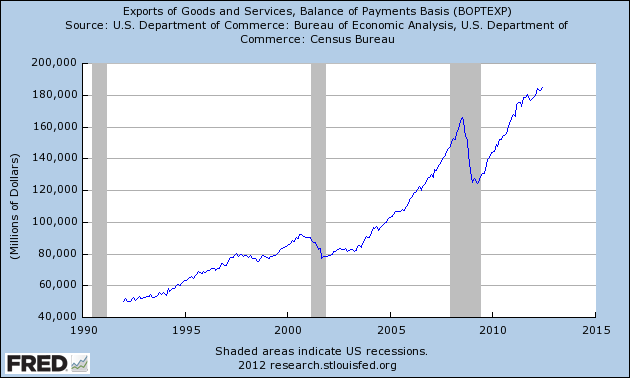 The above charts shows total exports on a balance of payments basis.  As clearly evidenced by the data, this has been one of the bright spots of the recovery.  US exports rebounded from the recession and have been growing for the last few years at a strong clip. 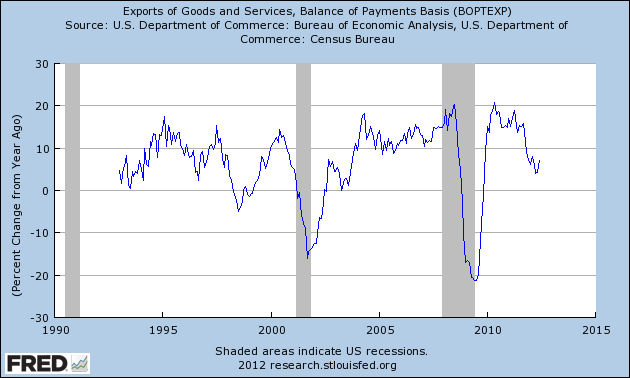 However, the year over year percentage change chart shows a clear slowing down of the pace of increase.  Part of this is due to the very favorable comparisons that occurred at the beginning of the recession -- when exports contract 20% in the previous year, it's easy to make the annual comparison look good.  However, there is no mistaking that the pace of expansion is slowing, largely because the rest of the world is slowing down.

Also consider that exports only account for 14% of GDP, so the multiplier associated with this sector would have to be quite large for it to have the power believed by the article's author.

Finally, I don't think we'll be seeing a big pick-up in world-wide growth anytime soon, so I'm not sure this is a surefire reason to get excited.