Two piece of economic data released this morning make it considerably harder for bears to argue that we are slipping into, let alone already in, a new recession.

Housing permits rose to 812,000. This is the first time over 800,000 and the highest level in 4 years. Permits have risen over 200,000 on an annualized basis over the last year. The now-strong upward trend in permits, generally consistent in the past with GDP over 3% in the near future, is evident on the updated graph below, showing permits in blue, private residental construction spending in red, and residential construction employment in green: 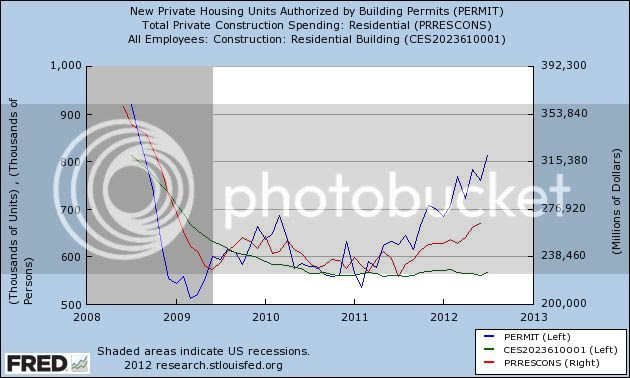 You can see that permits lead spending, which in turn leads construction employment. Needless to say, the rise in permits is bullish for both residential construction spending and future employment.

Also this morning the four week average for first time unemployment claims fell to 363,750, only 750 or 0.2% above its lowest reading during the entire recovery: 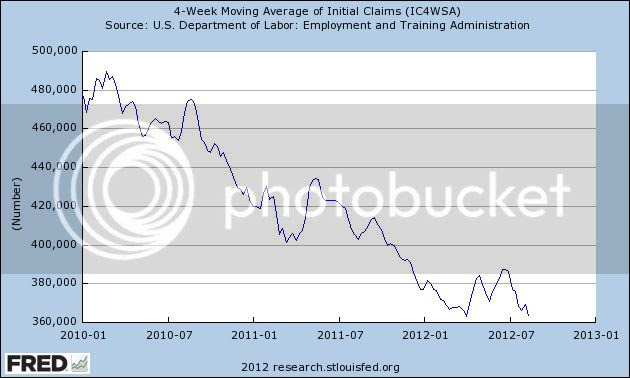 No recession has ever begun within 2 months of such a reading.

There are certainly major problems with the expansion, most notably the plateauing of consumer retail spending since this year began, and the complete stalling and perhaps slight contraction in manufacturing. But this morning's releases put an exclamation point on the proposition that the expansion hasn't expired yet.
Posted by New Deal democrat at 2:00:00 PM