We now know the values for July for 3 of the 4 indicators that the NBER uses to mark economic peaks and troughs.

Nonfarm payrolls were reported up 163,000 for the month.  Further, their YoY growth has been acceleratiing slightly a compared with earlier this year.

This morning Industrial production was reported at +0.6.  Production made another post-recession high in July, and is now only about 2.5% less than its pre- Great Recession peak, as shown on the graph below: 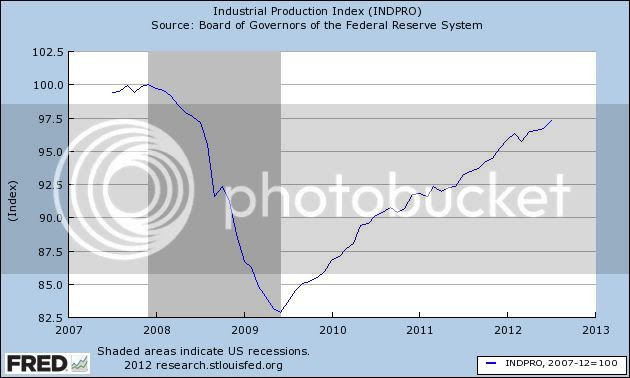 The YoY growth has decelerated slightly.

Yesterday retail sales were reported up 0.8%  for July.  With this morning's flat CPI report, we now know that real retail sales were also up 0.8%. (Based on Gallup's spending data, I had thought these would come in poor. I was wrong, but happily so.)  This reverses last month's decline, although we are still below the levels set in February and March.  These are about 1.7% under their pre- Great Recession peak: 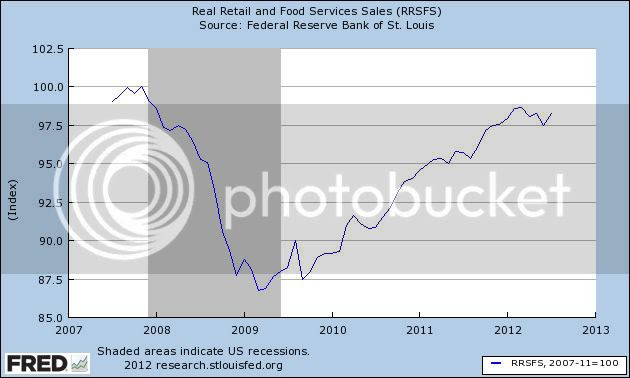 The final coincident indicator, real income, won't be reported for another couple of weeks.   Barring downward revisions, however, it seems likely that the economic expansion continued in July.
Posted by New Deal democrat at 10:00:00 AM