As I've noted several times recently, one sign of economic strength or weakness is shown by comparing YoY consumer prices (blue in the graph below) vs. commodity prices (red, amplitude divided by 2 better to show the comparison).  Usually before a recession there will be a rise in inflation, with the more upstream producer and commodity prices spiking higher than consumer prices.  As the economy weakens into and through a recession, the more upstream prices fall more than consumer inflation, and their bottom marks the end of the recession.  Here's an updated graph from 1998 to the present, showing that pattern for both the 2001 and 2008-09 recessions, as well as the weakness in 2006 (in which one quarter of GDP was just barely positive, and we had one month of job losses plus two of tiny gains): 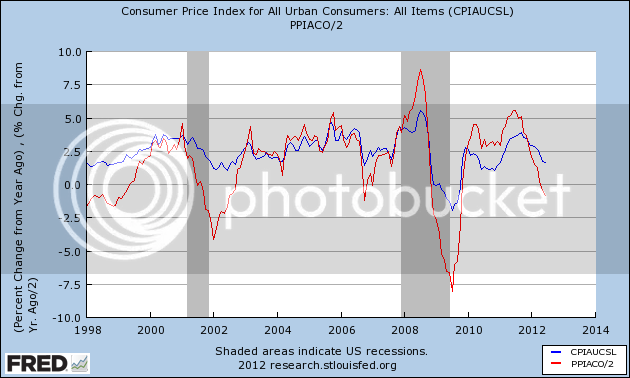 Another way to give you a better look is to subtract YoY consumer prices from producer prices (blue in the graph below).  A negative result shows weakness, a positive result shows strength.  Then we compare with monthly job gains or losses (red). Here is an updated graph the period of 2006 to the present: 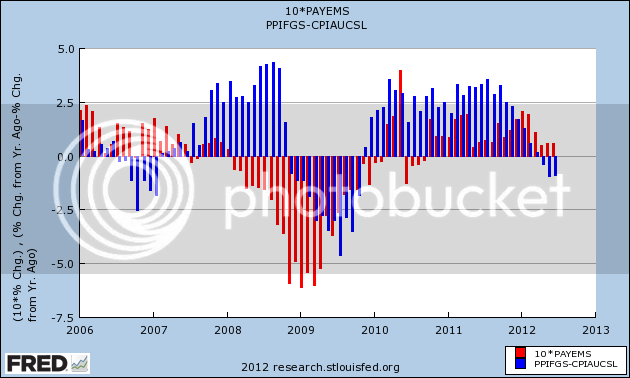 In 2006 YoY price weakness did not result in actual job losses, except for one small loss in one month.  At this point in the cycle in both 2001 and 2008 there were job losses.  This year, as in 2006, job gains have remained positive even in the face of YoY price weakness.

I suspect we will have at least two more months of declines in YoY inflation, as the July and August 2011 CPI numbers of +.3% and +.3% are replaced, and hence further economic weakness.  After that the 2011 monthly readings were essentially 0, so unless something truly awful happens, I expect the relative weakness to end.

We got another slap in the face earlier this week as real retail sales for June fell -0.5%, meaning almost a 1% decline since March. As I wrote back in 2009 when the recession was bottoming out, real retail sales are the "holy grail" precursor of job growth or losses, consistently changing direction a number of months in advance. Then it was an optimistic sign. Not now. Here's real retail sales (blue, right scale) v. payrolls (red), left scale) since 1998: 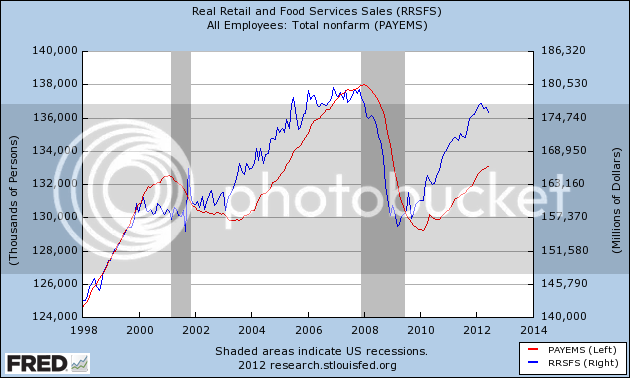 That real retail sales have turned south is definitely a bad sign. On the other hand, note that we had deeper declines in both late 2005 and 2006 without job losses (except for one month, mentioned above).

In other words, while growth is lousy, we aren't necessarily tipping into contraction.
Posted by New Deal democrat at 10:00:00 AM