More on the Oil choke collar and payrolls


A commenter on yesterday's post said that to correlate oil prices and payrolls was "silly" and further that "if you showed data going back to the first half of 2008, you would have noted that oil went up dramatically while the US economy was losing a significant number of jobs every month at the same time."


Indeed, 2006 was another time that Oil approached, but did not cross the threshold where it would cause actual economic contraction, although as we all remember in the frst half of 2008 it certainly did.


So here is the same graph as I ran yesterday, using $3.25 vs. $4 as the inflection point for the price of a gallon of gasoline, from the beginning of 2006 up until September 2008: 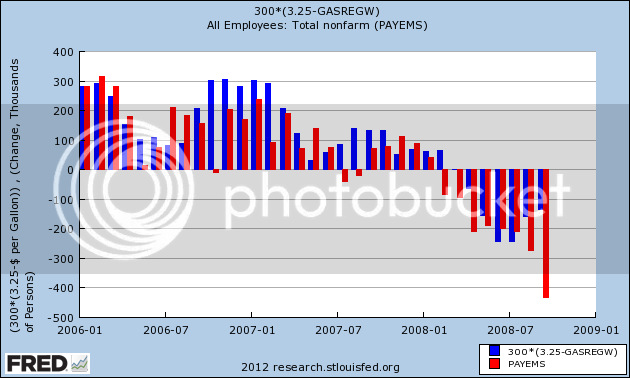 I submit that the correlation appears very similar to the graph I ran yesterday of 2010 to the present.  In fact, the commenters argument about early 2008 very much supports my point.


By no means am I saying that Oil prices are a single variable determining job growth or losses.  Rather, it appears that absent an overwhelming outside event like 9/11 or Lehman Brothers, Oil prices are an important input especially as they approach or exceed the inflection point where the choke collar tightens, and my explain the apparent new "seasonal distortions" of the last several years.
Posted by New Deal democrat at 2:00:00 PM