Over the last few days, Bernanke has spoken to Congress and the Fed has released the Beige Book.  In addition, we've seen a lot of soft numbers come from the US over the last few months.  As such, let's start looking at a macro view of the US economy.  Consider this a "you are here" type of overview.


The U.S. economy has continued to recover, but economic activity appears to have decelerated somewhat during the first half of this year. After rising at an annual rate of 2-1/2 percent in the second half of 2011, real gross domestic product (GDP) increased at a 2 percent pace in the first quarter of 2012, and available indicators point to a still-smaller gain in the second quarter 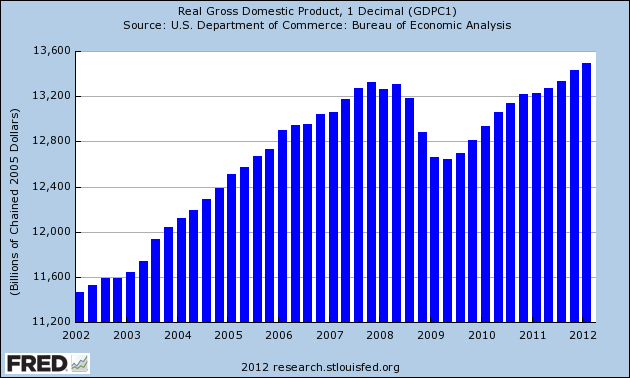 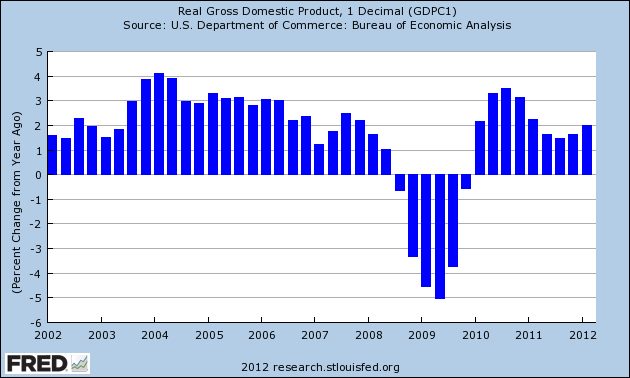 The top chart shows that on an inflation-adjusted basis, the US economy is now larger than before the recession.  This shows that, despite complaints about the recovery (which are warranted and justified) the economy is in fact growing.  The second chart shows the year over year percentage change in growth.  For the last four quarters, this number has been at or below 2%, which is very weak.


Household spending has continued to advance, but recent data indicate a somewhat slower rate of growth in the second quarter. Although declines in energy prices are now providing some support to consumers' purchasing power, households remain concerned about their employment and income prospects and their overall level of confidence remains relatively low.

From the Beige Book


Most Districts reported modest increases in retail spending on a year-over-year basis, but many reported slower growth in recent months compared with earlier in the year; however, Boston and Cleveland reported sales as flat, and New York cited softer sales. There were a few reports that high summer temperatures negatively affected sales. Sales of big-ticket household goods were strong in the Richmond, Chicago, Kansas City, and Dallas Districts, while sales were reportedly flat for home furnishings and major appliances in the San Francisco District. Boston reported that sales for furniture and electronics had slowed, and retailers in the New York District reported that home goods sales were weak. Reports from luxury-goods retailers were mixed. Firms in the Philadelphia, Atlanta, and Chicago Districts reported that sales of high-end goods remained strong, while retailers in the Kansas City and San Francisco Districts indicated demand had softened, and those in the Cleveland District noted that sales of luxury goods had slowed. Most Districts reported that vehicle sales remained robust. Demand was high for fuel-efficient vehicles in particular. Looking forward, merchants in the Boston and Philadelphia Districts were concerned that economic uncertainty could result in restrained sales growth, while retailers in the Cleveland District anticipated that the third quarter will be higher compared with year-ago levels. Kansas City noted that merchants there expected further strengthening in the coming months. Overall, real PCEs are clearly higher than their pre-recession levels.  In general, this data set has moved continually higher, with a few periods of leveling off -- noticeably in early 2011 and over the last 4 months. 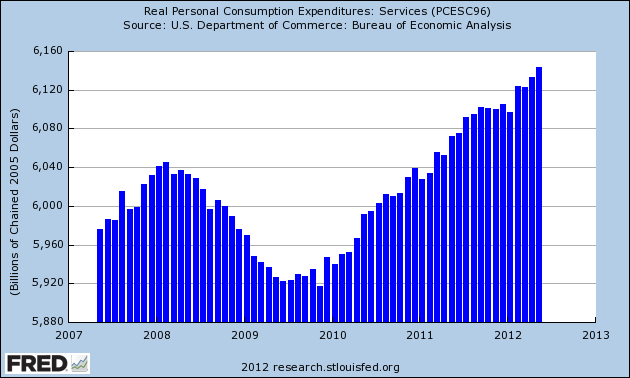 Services comprise about 65% of PCEs.  First, the overall trend is clearly higher, with current levels being higher than their pre-recession levels.  However, the second half of last year we see a leveling off of purchases, which lasted for about 5-7 months depending on how you classify it.  But purchases have moved higher since. 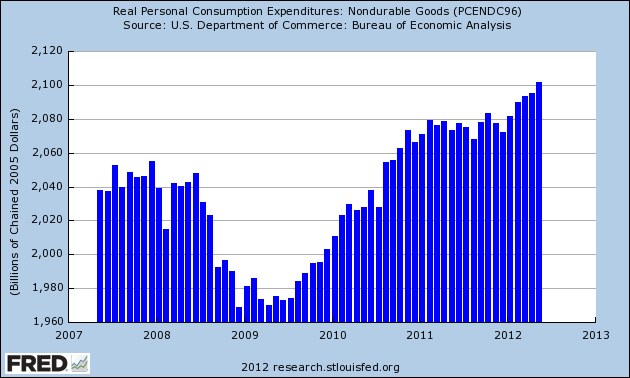 Non-durable goods comprise about 23% of PCEs.  Here we see there was a complete stall of purchases for an entire year in 2011.  But they are still higher than their pre-recession levels. 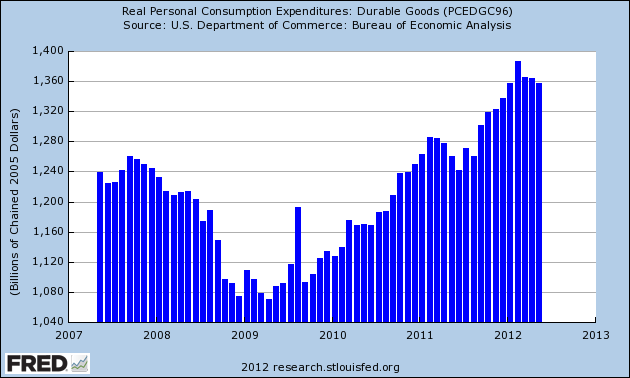 The durable goods data is more volatile, which is to be expected.  Overall, durable purchases are higher now than at their pre-recession peak.  However, over the last five months -- with the exception of three months ago -- this data has stalled.  This is concerning, as it indicates that consumers are holding back on spending for big items, which tells us consumers are getting cautious about the future. 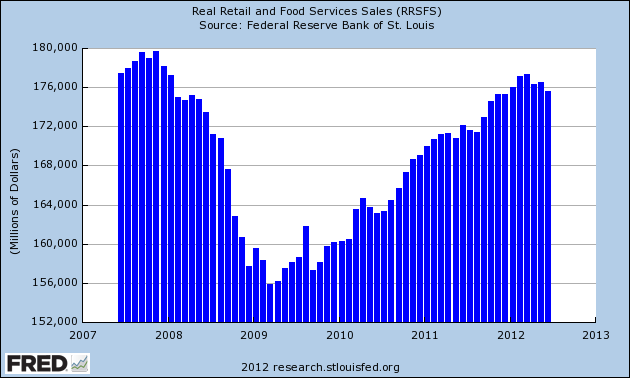 Real retail sales are not doing well.  First, as the chart shows, there has been a general leveling off for the last 5-7 months, depending on how you classify the phase "leveling off."  In addition, consider these two charts from Tim Duy:

The top chart shows the YOY percentage change in retail sales without gas and auto sales.  The chart shows a sharp drop outside of these two, key purchases.  The bottom chart is more of a rolling average, and it shows that sales are dropping sharping on a short term basis.  Again, this has very negative implications for the economy. 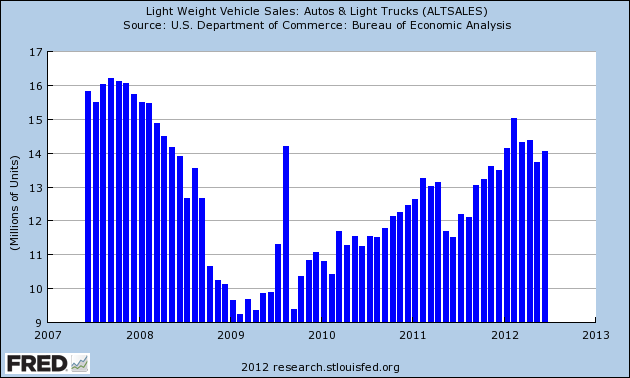 Above we have light vehicle and truck sales.  While this data set has been over 14 million/annually for 5 of the last 6 months, the pace of the overall trend has clearly leveled off.  But this is a hard set to read.  It could be that consumers are simply buying fewer cars total now considering the overall economy, meaning this figure won't hit pre-recession levels.  Or, it could me increased caution on the part of consumers. 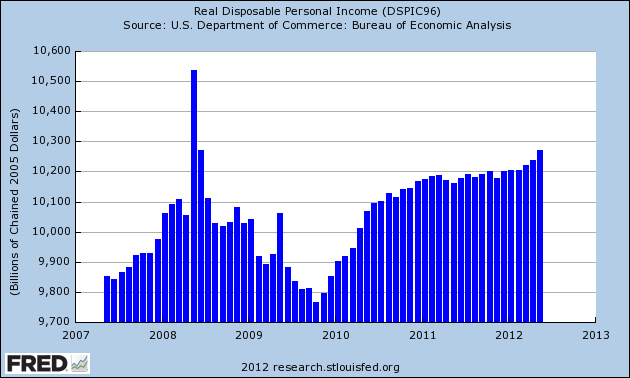 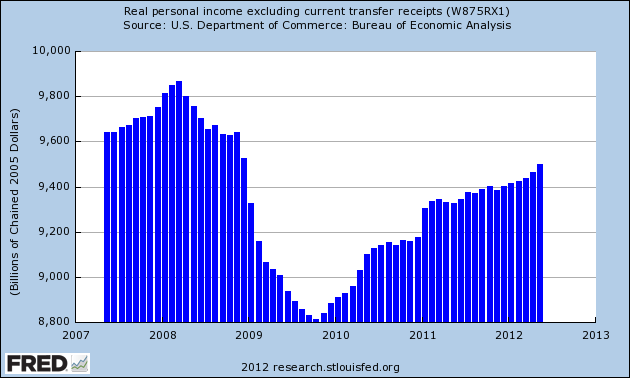 The retail sales figures are especially troubling, as they show a depressed sector with diminishing consumer activity.  And the numbers presented by Tim Duy are downright scary.  However, overall PCEs -- which are a larger data set -- are fair.  The overall rate shows an increase, largely because of service and non-durable purchases.  My guess is that people are purchasing services they can't do themselves and are finally replacing non-durable goods that have worn out over the last few years.  The durable goods numbers -- along with the car sales numbers -- also add to the concern, as they show the consumer is starting to clip his wings regarding big purchases.