What's Up With Small Business?

As I was reading the latest small business survey data this AM, I noted the following: 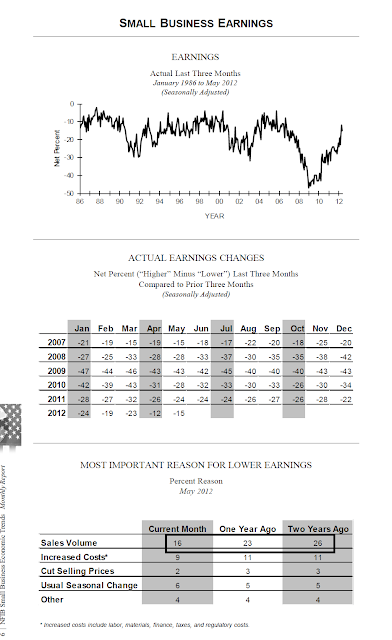 Notice that the percentage of respondents who reported increased earnings have been increasing for the last three years, and are now near levels associated with solid economic expansion; these are the same levels seen at the beginning of the 1990s expansion and the early 2000s expansion.

And while the sales volume number is currently lower (a reading of 16 versus 23 a year ago), sales are still positive. 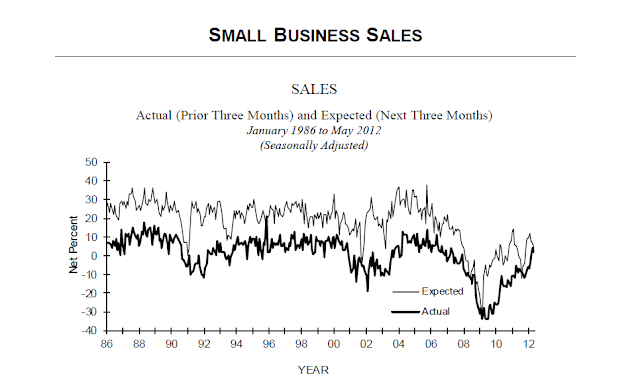 Also note the current level of overall dourness is not due to the gap between expected and actual sales; that gap is always there. 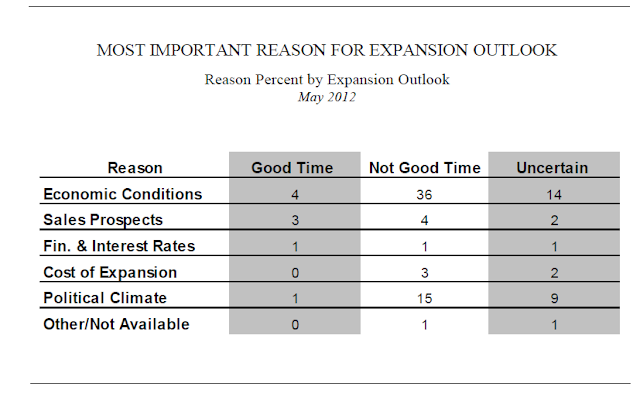 And yet a clear majority state this is not a good time to expand because of economic conditions.  While "political climate" is there at 15%, it is the overall economic environment that has small business worried.

The point of the above is that there is something "out there" that is really spooking small business.  They have identified that "thing out there" as economic conditions.  Politics is playing a role, but overall there is a tremendous amount of concern about the economy in general right now. 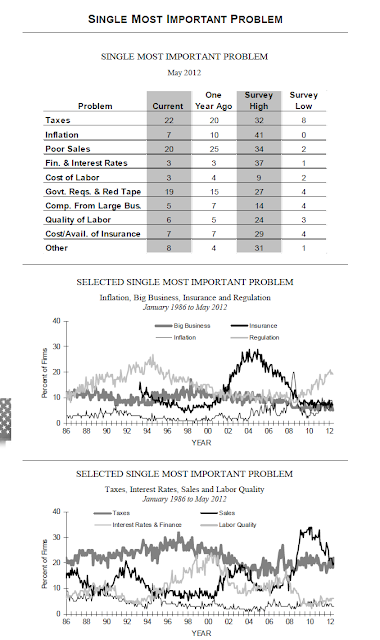 The top charts says that taxes are the most important problem facing small business, followed closely by poor sales (22 vs 20).  We also see regulation coming in at 19%.

However, looking at the historical series for taxes and regulation, notice that taxes are almost always at this level (lower chart).   When comparing the historical series to sales over the 26 years, sales have nearly always been below taxes.  That means the variably of the sales response is still a more important issue.

The regulation line is interesting (top chart).  It increased consistently from the mid-1980s to 1994, when it dropped down to about 10% of respondents, only to increase again from 2008-now.  Also note that the sales question was not asked until 1993, so we can't compare the mid-1980s run-up in the regulation answer to sales for that period.

Both increases in the "regulation" occurred at a time of significant regulatory change (duh!).  In the late 1980s and early 1990s, we had the S&L crisis, which led to the creation of the Resolution Trust Corporation, along with the passage of various pieces of legislation.  Now, the big piece is the Affordable Care Act, along with its various components and sub-components. At this point, the importance of the line becomes political, or, more specifically, this question: was the legislation passed appropriate to deal with each respective problem?  Put another way, should the law passed in response to the S&L crisis or health care crisis have been passed and were its components good law, such that, despite the reaction of small business, the law should stay on the books?  The answer to that questions is incredibly subjective and personal.  Perhaps most importantly, the percentage of business citing regulation as the reason is only 20%, telling us that for a clear majority (80%) regulation isn't the issue.

The fact sales spiked so high after the recession is very significant, as that would indicate lack of demand was clearly the reason for the concern.  Now the sales response is closer to the peak of the previous two recessions.  While the drop over the last few years is good, it's still high by historical standards and indicates that sales are still at best weak, especially when placed into historical perspective.  This still makes them the most important issue facing small business.