A Week of Central Bank Action

Consider these central bank events of the last week in relation to the overall economic situation:

Although the bank of South Korea kept rates steady, they noted the following in their release:

In terms of the future growth path, the fall in international oil
prices will act as an upside risk, but the downside risks have
increased due to uncertainties resulting from the euro area fiscal
crisis.

The downside risks to consumer prices, including those posed by
the declines in international commodity prices, are judged to be
generally in balance with their upside risks such as those due to
elevated inflation expectations and steeper than anticipated public
utility rate hikes.


First, like most countries, Korea imports a lot of oil, thereby making oil's price a very important number to keep track of.  And while oil's prices are dropping, they're dropping largely because of concern about the EU situation, hence the reason for linking these two events in thier release.

Second, the bank notes the general drop in commodity prices, but has to balance those against internal price pressures.   Here's a chart of South Korea's internal inflation rate: 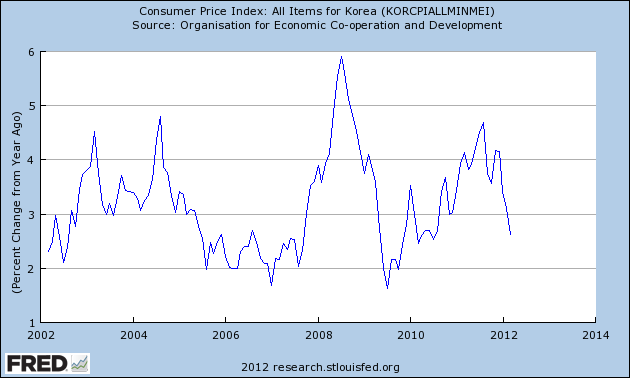 The chart shows a YOY increase of about 4.5%-4.75%, indicating that the economy is a bit more sensitive to world commodity price fluctuations than other countries.

Interestingly enough, South Korea really didn't get hit that hard by the global slowdown; consider this chart of the real, year over year percentage change in GDP: 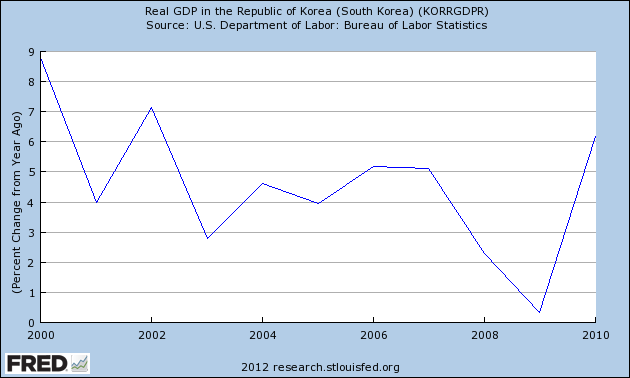 The worst reading was one just above 0%.

The Royal Bank of Australia lowered rates by 25 basis points:

Growth in the world economy picked up in the early months of 2012, having slowed in the second half of 2011. But more recent indicators suggest further
weakening in Europe and some further moderation in growth in China.

Conditions in other parts of Asia have largely recovered from the effects of last year's natural disasters, but the ongoing trend is unclear and could be dampened by slower Chinese growth. The United States continues to grow at a moderate pace. Commodity prices have declined lately, though they are mostly still high. Australia's terms of trade similarly peaked about six months ago, though they remain historically high.

Financial market sentiment has deteriorated over the past month. The Board has noted previously that Europe would remain a potential source of adverse shocks. Europe's economic and financial prospects have again been clouded by weakening growth, heightened political uncertainty and concerns about fiscal sustainability and the strength of some banks. Capital markets remain open to corporations and well-rated banks, but spreads have increased. Long-term interest rates faced by highly rated sovereigns, including Australia, have fallen to exceptionally low levels. Share markets have declined.

In Australia, available indicators suggest modest growth continued in the first part of 2012, with significant variation across sectors. Overall labour market conditions firmed a little, notwithstanding job shedding in some industries, and the rate of unemployment remains low. Nonetheless, both households and businesses continue to exhibit a degree of precautionary behaviour, which may continue in the near term.

Australia and China are inextricably linked; Australia has benefited greatly by supplying a large amount of raw materials to China.  As a result,  China's overall health is obviously very important to Australia.  This decision was made before China's rate cut which would obviously be viewed positively by the Australians.

Note particularly the last paragraph.  Even though the economy is doing well, the bank is beginning to see signs of concern on the part of businesses and individuals.  Hence the reason for the rate cut.  As noted by the Money Illustion Blog:


Forget about the implied 5.5% NGDP growth forecast.  Australia has a 2-3% inflation target and faster trend RGDP growth than the US.  That sort of nominal growth would be beyond my wildest dreams for the US.  Rather think about how proactive they are.  Unemployment is low and inflation is in the sweet spot.  But they are easing monetary policy because they see the global slowdown, which for some reason the much more sophisticated Fed and ECB don’t quite comprehend.  They aren’t cutting rates because 5.5% NGDP growth is too low, they are cutting rates to make sure that 5.5% NGDP growth happens. 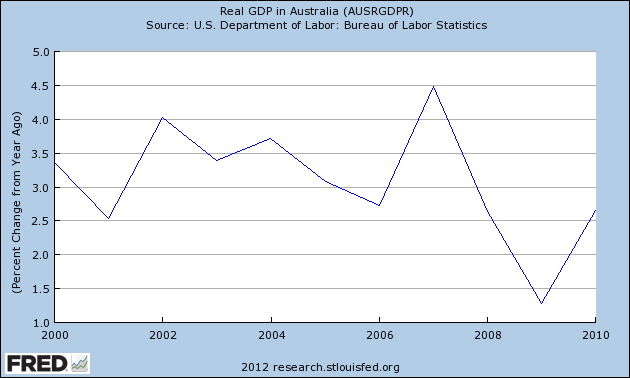 The above chart shows the percentage year over year percentage change in real GDP.  Again -- like Korea -- notice Australia really didn't have a recession.  However, this also shows how dependent the Asian rim is on China and, more specifically, Chinese growth.


Part of the reason is the slowing manufacturing situation.  Consider this from HSBC: 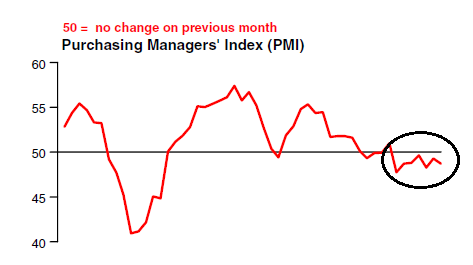 The HSBC manufacturing index has been below 0 for some time, indicating contraction in this sector.

And China doesn't have as much pressure from inflationary pressures: 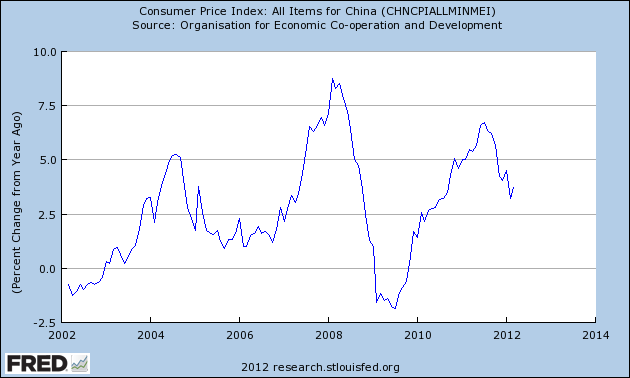 On one hand, a decreasing inflation picture is good because it indicates prices are easing.  However, the question to ask is why.  Part of the answer is the decrease we've seen in commodity prices on world markets.  But that has occurred because traders perceive demand as dropping, which is not good.

The bank of England decided to keep rates low:

I highlighted the UK economy in this post; basically, it's a wreck.