When all is said and done, employment and income are the two most important measures of the economy. If there are more jobs and better incomes available to a substantial majority of society, the economy is working. When jobs and income are in decline, the society is in serious trouble. While the economy bottomed close to three years ago, progress on both fronts, while real, has been disheartening in comparison with a truly healthy economy.

Still, there has been better progress on the jobs front in the last few months, and it looks like March will be no exception.

While the BLS has rejiggered its seasonal adjustment for initial claims, that hasn't meaningfully affected the trendline with job growth. They may do the same this Friday to payroll numbers. If so, the following discussion applies to the pre- rejiggered figures.

First, let's look at the scattergraph of initial claims vs. private payrolls. Since the average initial claims in March was about the same as for February, I expect a similar number, in the ballpark of 250,000 private sector jobs. If the trend from the last year holds true, February will also be revised upward significantly, also to about 250,000. 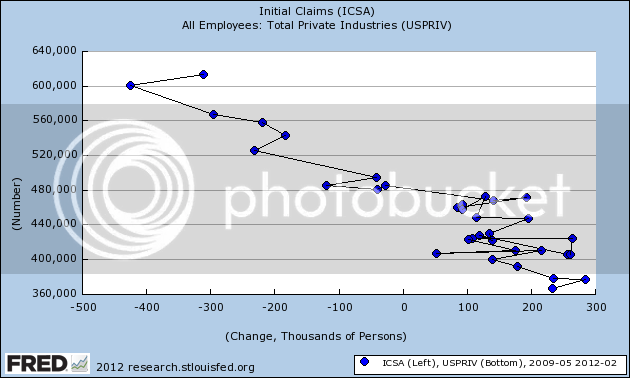 Remember, if we were on the cusp of entering an economic contraction, new jobs offered would decline before layoffs increased, meaning the new entries on the scatterplot would shift substantially to the left. Should March come in under 200,000 (again, pre-rejiggering the seasonal adjustments), and should February also be revised down under 200,000, that would be a bad omen. Conversely, if both come in, pre-rejiggering, in line with the established trend, that would suggest that the recovery will continue for near future. With the American Staffing Index of temp jobs rising to its best level since the recession in the last month, and Online Help Wanted ads rising to their highest level ever, a continuation of the trend is the most likely outcome.

This is the graph of the initial jobless claims rate, (blue) compared with the unemployment rate (red), updated through February: 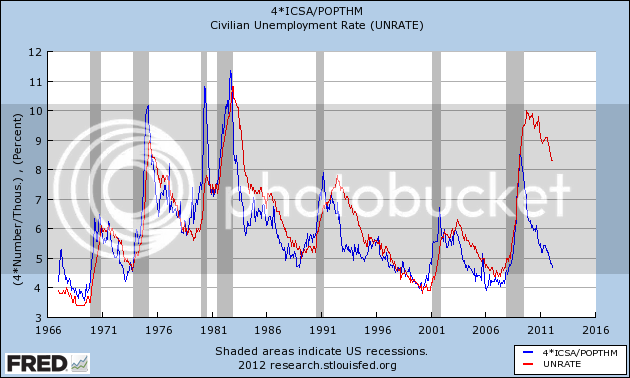 Keep in mind that the rate of initial claims leads the unemployment rate, and has since records started to be kept.

Now here's the close-up for the last 3 years (with initial claims rebased to show the similarities more clearly): 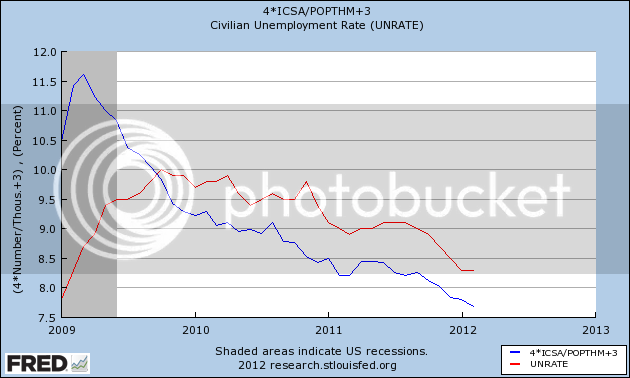 With the rate of initial claims continuing in March at its February rate, expect the unemployment rate to continue to drop. A decline to 8.2% in the U3 unemployment rate looks likely, and a drop to 8.1% well within the range of possibility.
Posted by New Deal democrat at 10:00:00 AM