Republican Economic Talking Points Are Baseless and Devoid of Fact

First, I want to apologize in advance for this overtly political post.  I hate politics and frankly, have a fair amount of disdain for both political parties.  While I used to be a Democrat, I was basically told I was "too centrist" or "pro business" for their liking and am now an independent.

And while I try and keep politics out of this blog, there are times when it becomes impossible for me to keep my mouth shut.  When the talking points of one side of the political blogsphere are this unhinged from reality, I feel forced to speak up and explain why these points are completely baseless when compared to the underlying data.  By unhinged, I mean this:

THERE IS ABSOLUTELY NOT ONE BASIS IN FACT FOR ANY OF THE FOLLOWING TALKING POINTS.  IN FACT, THE UNDERLYING DATA INDICATES THE EXACT OPPOSITE IS HAPPENING:

Obama is a Socialist and we are becoming a socialist country: no. If this were true, we'd see a continual increase in government spending influencing the economy.  However, we are not, as evidenced by the following data from the Bureau of Economic Analysis: 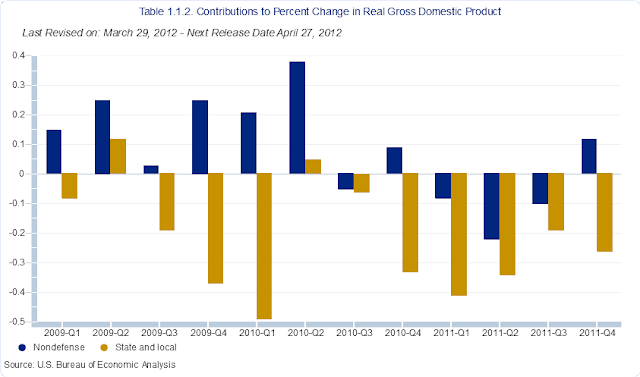 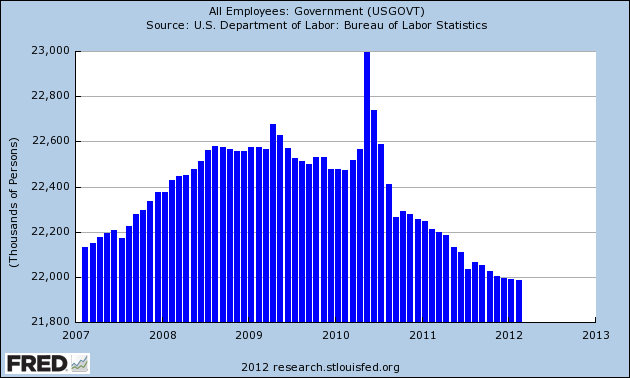 In addition, if we were in the middle of a socialist takeover, we'd see an increase in government employment.  In fact, we've see the exact opposite occur -- government jobs have been decreasing since 2009, with the exception of the census hiring in 2010.

If we were really seeing a socialist takeover of the country, this chart would look far different.  Or, put another way:


Businesses have been frozen in their tracks because of government regulation:  No.  If this were true, we'd see absolutely no business investment.  In fact, the exact opposite has been true: 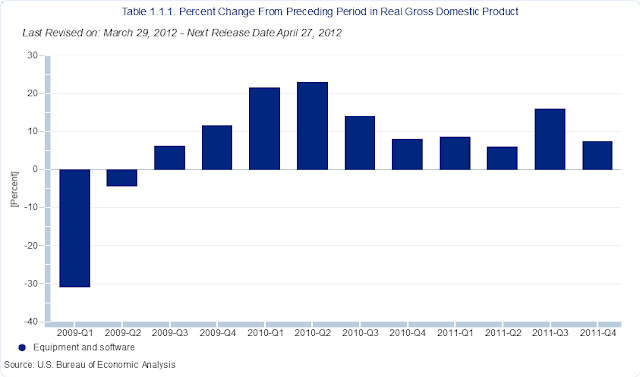 The above chart shows the Q/Q percentage growth in investment in equipment and software.  Yes, we do see a contraction for the first two quarters.  However, we see continual growth for the last 10 quarters.  In addition, we see a few of those quarters clocking in at very strong growth rates.

The tax burden is too high and is choking growth: no.  Actually, the tax burden we currently have is one of the lowest in the last 60 years:

The above chart is from Felix Salmon of Reuters, who noted the following
We (Republicans) care about the deficit: no.  If that were true than the Republican candidates would have proposed reasonable plans to lower the deficit.  In fact, the exact opposite is true.  From the Christian Science Monitor:

According to a new analysis from the non-partisan Committee for a Responsible Federal Budget, none of them would. At least not through the next decade. In fact, compared to what the fiscal watchdog calls a realistic budget baseline (that is, if the government continues on the track it’s on today) all of the GOP candidates, save for Ron Paul, would make matters worse.

Rick Santorum and Newt Gingrich would make things far, far worse. Mitt Romney’s tax and spending plan wouldn’t bend the debt curve very much one way or the other. But, according to CRFB, if he doesn’t find a way to pay for his latest plan to cut tax rates by 20 percent Romney would significantly increase deficits and the debt as well.

Except for Paul, each of the candidates has the same problem. They have enthusiastically promised to cut taxes in very specific ways—sometimes by vast amounts. But when it comes to offsetting spending reductions or cuts in tax breaks, they mostly offer little more than platitudes.

A few numbers: The group figures that if government policy stays on track, the national debt would grow from 78 percent of Gross Domestic Product today to 85 percent in 2021. Paul would pare that to about 76 percent.

All of the plans, save Ron Pauls, would increase the deficit.  In other words, taking care of the deficit is in fact the last thing on your mid.

Over the last few years, we've see some surprising studies regarding conservatives.  The latest  is that educated conservatives trust science less and less:

"That's a surprising finding," said the report's author, Gordon Gauchat, in an interview. He has a doctorate in sociology and is a postdoctoral fellow at the University of North Carolina at Chapel Hill.

Put another way, the profession that relies on data, evidence and critical thinking is anathema to modern Republicans.  That's not very encouraging.

In addition, only 6% of scientists consider themselves Republicans:

A profession that deals with facts and data wants absolutely nothing to do with one of the major political parties in the US.  Let that statement sink in as you let it's ramifications manifest.  It's a very scary, 1984ish type of picture that emerges.

For me, the above two data points are by far the scariest, as they show a truly troubling development: data, facts and reasoning are now shunned by a major political party.  At some point in the last round of Republican debates, a questioner asked who either didn't believe in evolution or did believe in creationism.  All candidates raised their hands.  That fact alone should disqualify all for any elected office, from president down to dog catcher.  Think about what these people said with that statement in relation to the modern world that is dominated by technology.  Do any of these candidates want to regularly see a doctor who doesn't believe in natural selection or the scientific method?

I was originally educated by Jesuits (St. Xavier High School, Cincinnati, Ohio, Go Bombers).  There is one thing they ingrained in me:  Look at the data -- as in facts , as in the hard and objective reality to see what it says.   And yet, one party is now saying, "I don't believe in data as we know it."  That explains their continual reiteration of economics claims which completely ignore reality as expressed by economic numbers.

The above data points indicate that fundamental tenants of the current Republican economic talking points are false. Government spending is in fact subtracting from growth and government jobs are falling.  This indicates we're not a socialist country.  Businesses are still investing at a strong clip, indicating they're not frozen in their tracks.  The overall tax burden is in fact low.  And no one in the Republican field has put forward a deficit reduction plan that has an ounce of credibility.  In short, Republicans aren't even on the same planet when it comes to the economy.

The second set of data regarding conservatives and science indicates that data does not mean anything to Republicans.  And that is what has truly terrifying implications for the formulation of policy at the national level.  When one player has absolutely no use for data, it's impossible to negotiate in good faith.