Can The US Lead the World In Growth, Pt. 2 PCEs

Yesterday, I looked at investment as a contribution to GDP and argued that business and equipment investment should be able to contribute to growth, but that CRE and residential investment were probably out.  I should also add that with the rest of the world slowing down, exports can't really contribute to growth for obvious reasons. And with the new found love of austerity, it's doubtful we'll see any major public initiatives in the future. As such, that leaves US consumers as the last salvation.

So, let's start with where the consumer is now, by looking at real PCEs. 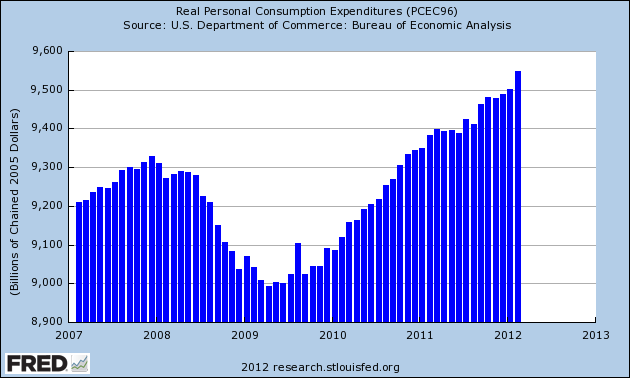 Overall, real PCEs have been rising since mid-2009.  Aside from a leveling off in growth in early/mid 2011, we see that total PCEs have continued to increase. 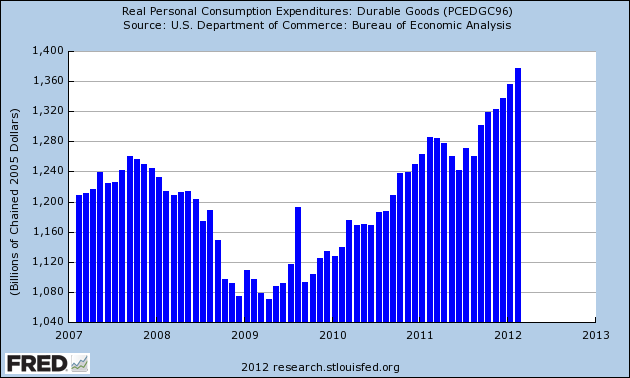 Real durable goods purchases -- which only account for about 12% of all PCEs, have risen strongly, especially in the last six months. 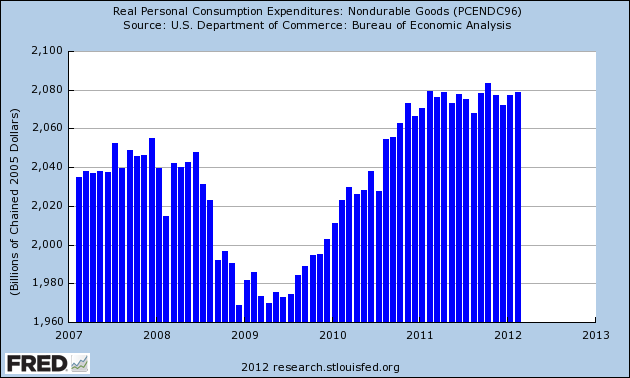 Real non-durable goods purchases, however, haven't risen at all.  These account for about 20% of PCEs. 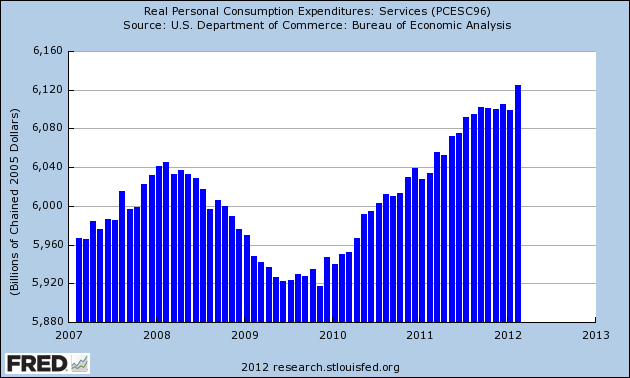 Services are at strong levels -- higher than the previous expansion - and they rose strongly last month.  However, for the five months prior to that, we see a leveling off in growth.  This occurred when there was concern in the US about an overall slowing in the economy as a whole. 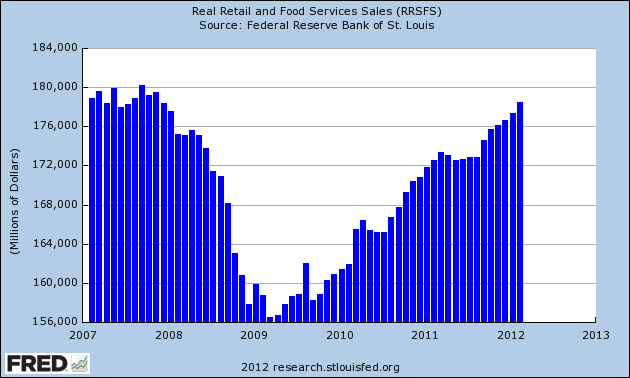 Real retail sales are also increasing.  However, like the service component of PCEs, we see a leveling off over the the summer/end of 2011 as there was a concern about an overall slowdown in the economy.

1.) The stalling in non-durable goods tells me that consumers are doing two things: first, they're making do with less.  Whereas they previously were more inclined to purchase an additional piece of clothing when it was on sale regardless of need, they are now making very tough choices and refusing these purchases.

3.) The rise in durable goods purchases tells me that consumers are only purchasing those goods that they absolutely need -- like autos and appliances.  These purchases are receiving the bulk of consumers discretionary purchase attention.

Now- -- can we continue to see an increase in PCEs to such a degree that the US consumer continues to drive growth?  In order for that to happen, we need to see the following happen.

1.) A continual improvement in the employment picture. First, we need to see initial unemployment claims remain at least at current levels: 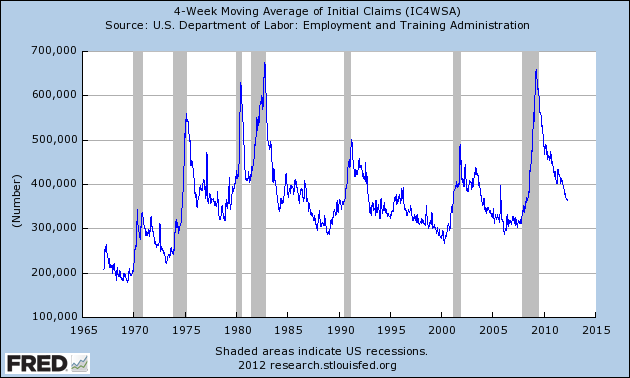 The 4-week EMA of initial unemployment claims has been below 400,000 since the beginning of the year.   At minimum, we need to see these levels continue on going forward.  In addition, 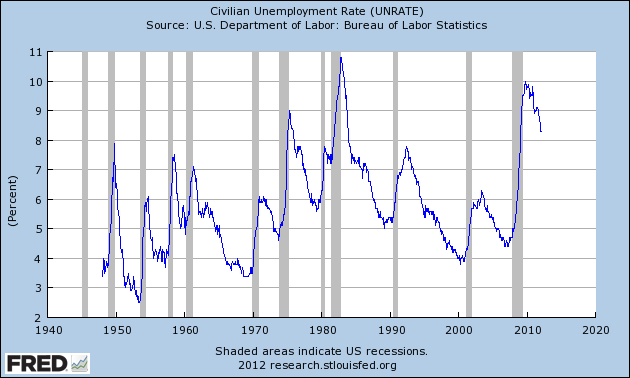 The public needs to see continued improvement in the unemployment rate.

In addition, we need to see real wage gains.  Unfortunately, because of high unemployment, we're not seeing this number advance.  Consider the following measures: 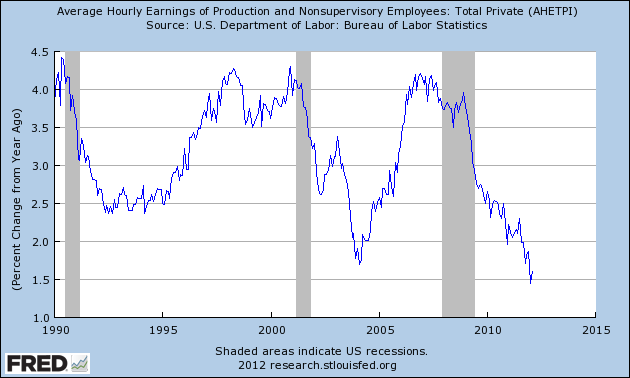 Average hourly earnings of production workers -- while seeing an increase -- is still seen a weak and declining YOY percentage change. 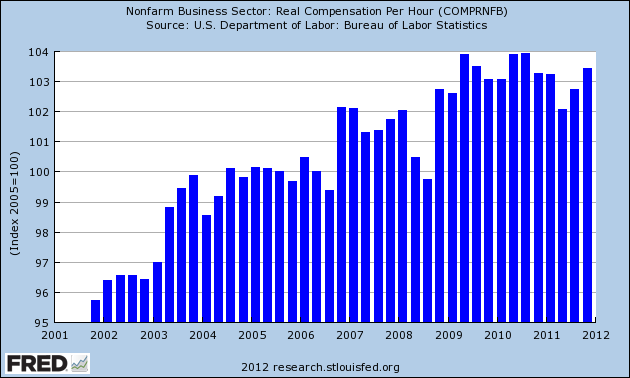 Real compensation per hour has also stalled for the last three years. 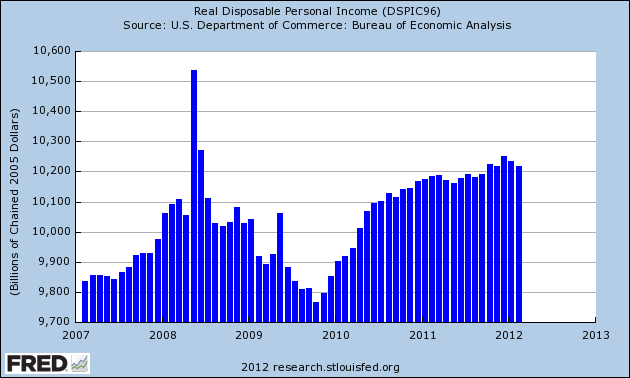 Real disposable personal income has declined for the last two months; overall, the figure for the last five months has been in a very narrow range.  And before that, we also don't see much growth. 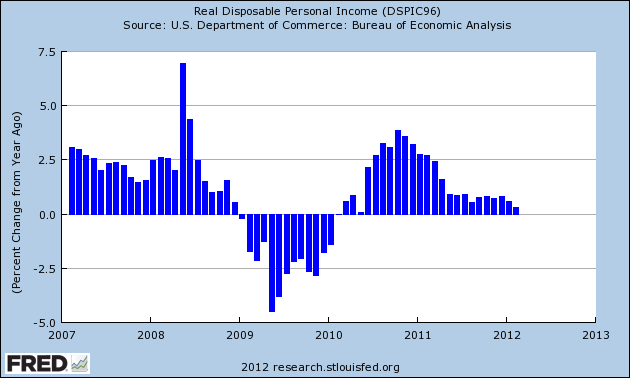 The YOY percentage change in real DPI has been incredibly weak. 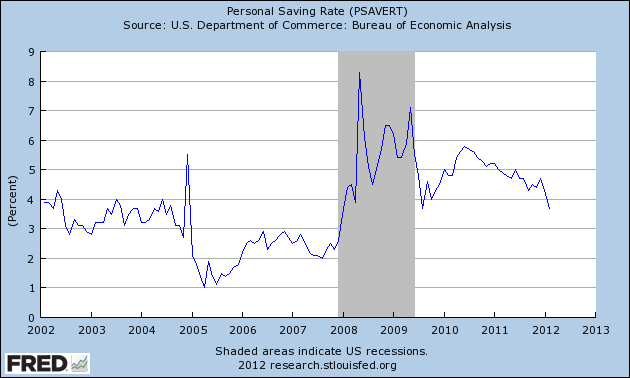 During the recession, we saw a big increase in savings.  For the duration of the recovery, that number has been fluctuating between 4 and 6 percent and is currently declining.  This is the source of some of the consumer spending.  In addition, 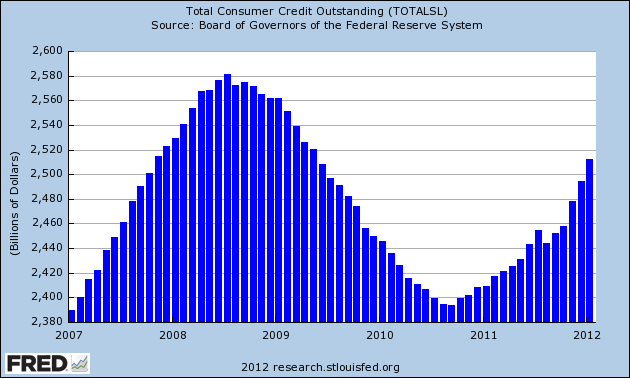 Consumer credit outstanding is on the rise, providing liquidity for consumers.

It's possible we could see the following: consumers continue to tap their savings and consumer credit to increase purchases.  But central to this is the need to continue to see improvement in the job market.  If the unemployment rate continues to drop, we will see a boost to consumer confidence, which will in turn lead to increased purchases.  However, a slowdown in the employment figure would be fatal, lowering confidence and limiting consumer purchases.