Will Oil Cause A Slowdown?


With no clear end to tensions with Iran and Syria and rising demand from countries like China, gas prices are already at record highs for the winter months — averaging $4.32 in California and $3.73 a gallon nationally on Wednesday, according to AAA’s Daily Fuel Gauge Report. As summer approaches, demand for gasoline rises, typically pushing prices up around 20 cents a gallon.

And gas prices could rise another 50 cents a gallon or more, analysts say, if the diplomatic and economic standoff over Iran’s nuclear ambitions escalates into military conflict or there is some other major supply disruption.

“If we get some kind of explosion — like an Israeli attack or some local Iranian revolutionary guard decides to take matters in his own hands and attacks a tanker — than we’d see oil prices push up 20 to 25 percent higher and another 50 cents a gallon at the pump,” said Michael C. Lynch, president of Strategic Energy and Economic Research.

Consider the following chart from This Week in Petroleum:

Over the last week, we see a large spike in gas at the pump. According to the above report, prices increased 13 cents last week.

Here is a summation of the market, again from This Week in Petroleum:


EIA estimates that the world oil market has become increasingly tight over the first two months of this year. Oil prices have risen since the beginning of the year and are currently at a high level. Global liquid fuels consumption is at historically high levels. While the economic outlook, especially in Europe, remains uncertain, continued growth is expected. Unusually cold weather in Europe contributed to tighter markets by increasing the demand for heating oil, particularly during February.

With respect to supply, the world has experienced a number of supply interruptions in the last two months, including production drops in South Sudan, Syria, Yemen, and the North Sea. Both the United States and the European Union (EU) have acted to tighten sanctions against Iran, including measures with both immediate and future effective dates. There is some evidence that these measures may already be causing some adjustments in oil supply patterns. For example, there is emerging evidence that some shipments of Iranian crude oil under existing contracts are being curtailed due to the unwillingness of U.S. and EU insurance providers to cover them, even though the EU sanctions only require existing oil contracts to be completely phased out by July 1, 2012.

Finally, spare crude oil production capacity, while estimated to be higher than during the 2003 to 2008 period, is quite modest by historical standards, especially when measured as a percentage of global oil production and considered in the context of current geopolitical uncertainties, including, but not limited to, the situation in Iran.

Crude oil prices have been generally rising over the past two months, particularly in recent weeks. This is reflected in price movements on the most commonly traded oil futures contracts. Comparing the 5-day periods ending December 30, 2011 and February 27, 2012, the price of the front month of the New York Mercantile Exchange (NYMEX) light sweet crude oil contract (WTI) rose from $99.77 per bbl to $107.66 per barrel. The Brent front month price, which is widely viewed as being more representative of global prices for light sweet crude oil, rose from $108.04 to $123.56 over the same period.

For the five days ending February 27, the average price of the June 2012 WTI crude oil futures contract was $108.64 per bbl and the average price of the June 2012 Brent contract was $121.91 per bbl. The WTI and Brent prices for June 2012 have increased by about $8 per bbl and $15 per bbl respectively since the end of December. Based on implied volatilities calculated from options and futures prices over the 5 days ending February 27, the probability of the June 2012 WTI futures contract expiring above $120 per barrel is 23 percent, a 4 percentage point increase relative to the same calculation made using price data from the 5-day period ending December 30. Given the higher absolute level and greater upward movement of Brent prices relative to WTI prices over the last two months, the change in the probabilities that the June Brent contract will exceed specified dollar thresholds are higher and have increase more over the past 60 days.

Gasoline prices have also generally been rising over the past two months, particularly in recent weeks. Reformulated blendstock for oxygenate blending (RBOB) is often traded instead of finished motor gasoline that already has been blended with ethanol, since oxygenate blending typically takes place at terminals along the distribution chain.

Comparing the 5-day periods ending December 30, 2011 and February 27, 2012, the price of the front month of the NYMEX RBOB contract, which calls for delivery in New York Harbor, rose from $2.68 per gallon to $3.11 per gallon. RBOB prices reflect pricing at the wholesale-level that do not include motor fuel taxes, or costs and profits associated with the distribution and retailing of gasoline. However, increases in RBOB prices are typically reflected in higher pump prices.

The average price of the June 2012 RBOB futures contract for the 5-day period ending February 27 was $3.25 per gallon, an increase of 49 cents per gallon from the 5-day period ending December 30. Based on implied volatilities calculated from options and futures prices over the 5 days ending February 27, the probability of the June 2012 RBOB futures contract expiring above $3.35 per gallon (comparable to a $4.00 per gallon national average retail price for regular grade gasoline) is 39 percent, a 23 percentage point increase from the result of the same calculation made using data for the 5-day period ending December 30.
.....
The U.S. average retail price of regular gasoline jumped 13 cents to $3.72 per gallon, about 34 cents per gallon higher than last year at this time. Prices were up across all regions, with the largest increase coming on the West Coast for the second consecutive week. The California price has surged more than 45 cents per gallon over the last two weeks. The Rocky Mountain price increased almost 10 cents to reach $3.20 per gallon, but remains the lowest regional average price in the Nation. Moving eastward, the Gulf Coast average price is $3.56 per gallon, and in the Midwest regular gasoline averages $3.62 per gallon. The East Coast price is the closest it has been all year to the national average, at $3.74 per gallon.

Here's the basic translation: demand is strong and supply is extremely tight.

Let's take a look at the daily and weekly price charts: 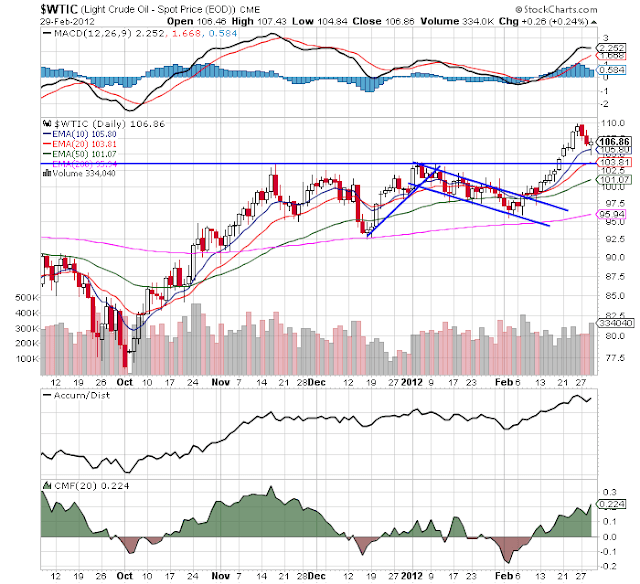 This week, oil prices have moved lower.  But they have done so in a disciplined way, forming a downward sloping pennant pattern.  Also note momentum is still positive and money is flowing into the market (rising A/D and CMF).  About the only bearish news on this chart is the decreasing angle of the shorter EMAs (10 and 20 day EMA).  However, given the geo-political background and the chart, if I were a serious oil trader, I'd be placing by orders right above the pennant's top line, in roughly the 108/109 area. 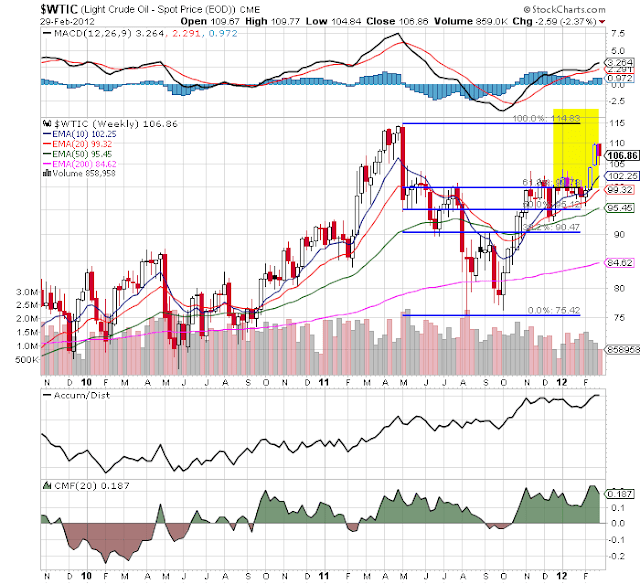 The weekly chart is very bullish.  Momentum is positive and rising, money is flowing int the market, all the EMAs are rising and there is no resistance for prices on the way to the 115 level.

Finally, for more information on the oil market in general, please see this page from the Oildrum.com.  It's a list of what the various authors this is their best work for the last 7-8 years of posting.
Posted by Unknown at 2:00:00 PM