Will Food Prices Derail the Expansion? Part I 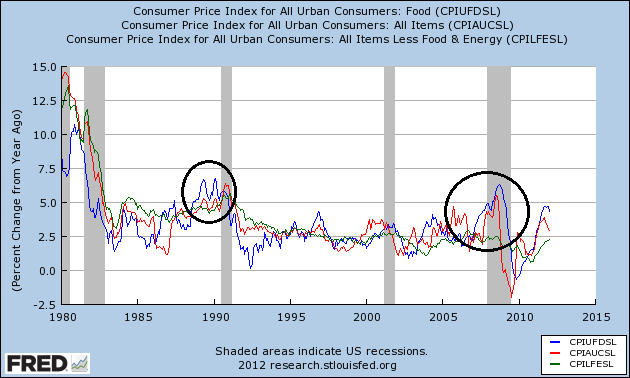 The above chart plots the year over year percentage change in food prices (blue), total CPI (red) and core CPI (green).  I've plotted this back to 1980, as this is the year we see Volcker engage in a massive spike in interest rates to crush inflation -- a plan that was in fact very successful.  Notice that before two of the last recessions we see a big spike in food prices.  This could be a good example of "correlation does not equal causation."  However, I find that a bit hard to swallow, considering how important and prevalent food prices are to the average consumer.  In short, like high energy prices, I think high food prices are a leading depressor of consumer sentiment, and therefore a big factor in recessions.  So, when we see price spikes, I also believe we see an increased possibility depressed economic activity and the increased possibility of recession.

First, let's strip out the food price YOY component from the above chart:

First, notice that YOY percentage changes of 5% or greater have preceded two of the last three recessions.  Currently, we see price recent spikes that hit just shy of the 5% mark.  Part of this is due to the severe drop in prices we saw as part of the recession and the subsequent rally in prices.  However, there is also the issue of increased world wide demand as countries see rising living standards, which leads to an increase in food demand.  We also had several agricultural market disruptions over the last few years, leading to constrained supply.  While it's impossible to separate out how much is due to the simple rebound from low levels and how much is due to an increase in demand, I would argue that the demand increase is a pretty important part of the pop.  China has been growing at a 10% clip for awhile; Brazil is also a fabulous growth story, as is India.  In short, I believe a convincing argument can be made for demand growth being a big part of the increase in food prices.

And, again, notice the YOY percentage change is approaching the "danger zone" of 5% which has preceded an economic slowdown.

Let's look at the various sub-parts to this index to see where food prices are.

The year over year percentage change in meat, poultry and fish has been very high for the last few years.  However, we've routinely seen this segment of food prices increase sharply over the last 20 years, so this is something consumers are use to seeing. However, the current size of the YOY increase is one of the highest we've seen over the last 20 years.

The year over year percentage change in fruits and vegetables is very contained at present.

Dairy prices are where we're seeing a fair amount of price appreciation, beyond that of of prices rebounding from a severe drop. However, there appears to be a fair amount of seasonality to these prices as well, indicating that consumers are probably far more conditioned to seeing them increase as the economy expands.  But, again, these price spikes are fairly high.

Cereal prices are where we see the biggest and most "out of place" historical year over year spike.  While this price series was fairly constant from the late 1980s until the last recession, we see some very large spikes over the last 7 years.  In addition, cereals are based on grains, which are now at the heart of the US food system; they feed cattle and are used for sweetners and fuel.

Part of this increase is due to the ethanol policy of the US government.  However -- and as noted above -- we've seen some pretty several international market disruptions in this area over the last few years as well.

All the above charts show that food prices are approaching levels that usually occur before a slowdown or recession.  In the next piece, I'll explore this situation in more detail.