In the previous article, I noted that the food component of CPI -- along with various sub-parts of the component -- are at high levels.  In addition, these levels are approaching readings that have preceded previous recession.  Today, I want to look at grains, as these prices are a primary reason for the recent increase in food prices.  Finally, I'll highlight the latest USDA crop forecast which shows an increasing supply of grains is coming, which will hopefully slow the inflationary pressures. 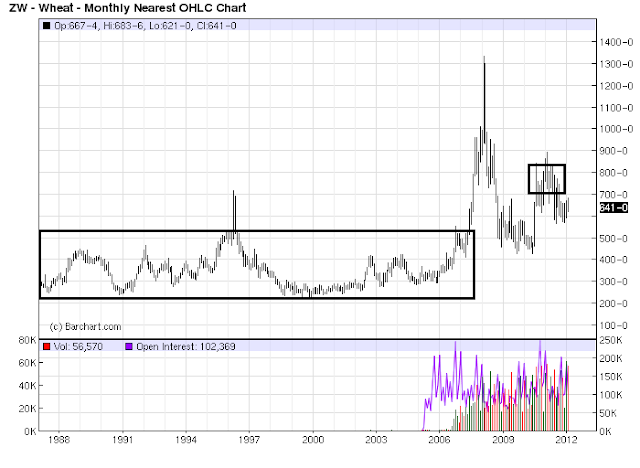 Above is a 25 year chart of wheat.  Notice that for the years 1987 to roughly 2007 (about 20 years), prices traded in a fairly tight range of 2.00/bushel to 5.00/bushel -- with the exception of a price spike in 1996.  However, wheat prices are now in a different trading range.  Before the last recession, we see a huge spike, with prices briefly getting to the $13/bushel area before dropping down.  Then notice how prices spiked to over $8.00/bushel a few years ago.  Now, prices are lower, but they are still above the $5.00 price top associated with the preceding 20 year period. 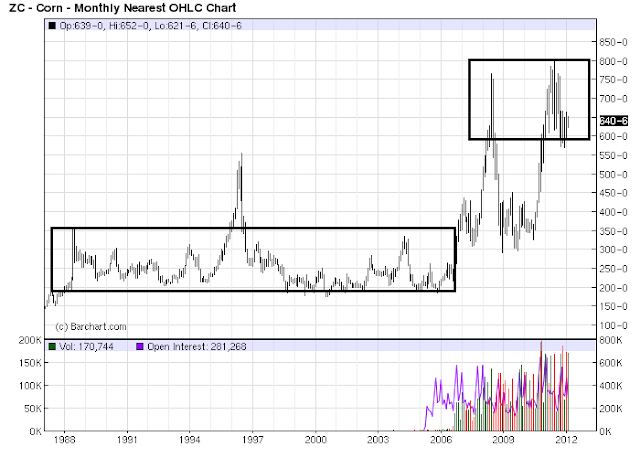 Corn prices show a similar pattern to wheat prices.  However, their recent, secondary spike hasn't completely abated.  This is due to the corn/ethanol relationship. 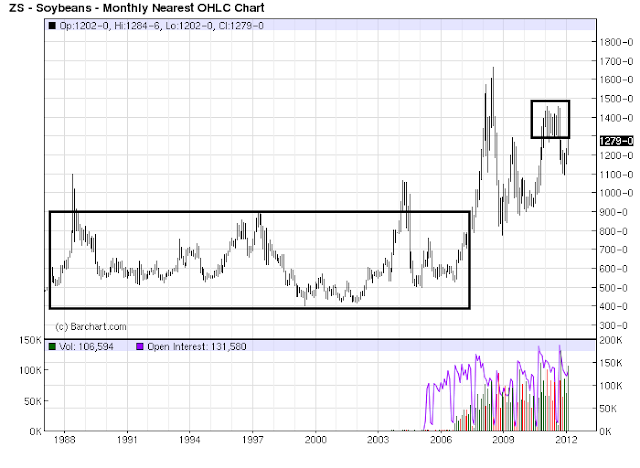 The soy chart is a bit between wheat and corn.  First, we see a period of relative price stability for about a 20 year period from 1987 to 2007.  During this time,  we see a trading range of between $4.00 and $9.00.  Then we see a massive spike preceding the last recession, a sell-off due to the recession and then a rise as the world's economies started back up.  Prices have fallen from the recent increases, but they are still at high historical levels. 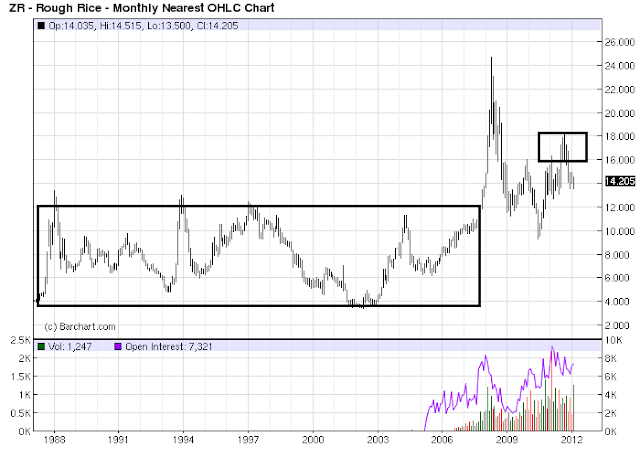 I've included rice because this is a base food element for SE Asia.  Notice how this chart most closely resembles the charts associated with soy beans above.]

However, let's take a look at the last year's worth of pricing information from the grains markets.

Soybeans dropped sharply last fall, but have since rebounded.  They are approaching the $13.00 level, which provided the floor for prices over the last summer.

Corn prices have also fallen from their spike last year, and are currently trading at a subdued price level.

Wheat prices have seen the most dramatic decrease.

The big reason for longer term price spikes is the increase in food demand from growing regions.  Consider the following chart from the latest USDA long-term projections estimate:

Notice how over the last 10 years, Africa and the Middle East have been importing and increasingly large amount of course grains (corn)


Wheat imports have seen an increase over the last 10 years and are projected to see further increases over the next 10.

Global rice imports have seen a tremendous amount of increase over the last 10 years, and are expected to see an even large increase over the next 10.  However, it's not all due to Asian imports, as sub-Saharan Africa is also a big net importer.


Soybean imports have increased greatly over the last 10 years, largely due to China.  As their economy grows -- and as their population sees it's standard of living increase -- we can expect to see this increase continue.

All the above charts have one, common pattern.  World food demand is increasing, thereby putting continued, upward pressure on prices.  What's also important to remember and note is the vast majority of demand is occurring in the developing world -- markets such as China, Brazil, India, Russia an Africa are seeing an increase in overall demand.

1.) The year price charts of various agricultural prices show a decrease in inflationary pressures.  This should help to lower food price pressures for the next 6-12 months.  However

2.) World economies outside the US are growing a t very strong rates, placing increased demand pressures on food prices.  In short, don't expect the lull to last.  In addition, we're only one natural disaster or strange weather incident away from price spikes.