Memo To Political Bloggers: Please Stop Writing About Economics; You Really Suck At It

I read a fair number of conservative and liberal blogs.  While each is pretty good at explaining their respective political philosophy, they all are absolutely terrible at economics.  By terrible, I mean that, without a doubt, they are abject failures of the highest order.   Let me give you a few examples.

Over at Hot Air, Ed Morrissey has argued that real inflation is in fact 8% according to an organization named the "American Institute for Economic Research."  Mr. Morrissey states that AIER's methodology is "robust and scholarly."  There is one slight problem with this analysis (along with the "robustness" of the AIER model): the entire US Treasury market, where the 10 year treasury is trading right around 2%. You see, Mr. Morrissey, bonds are extremely sensitive to inflation.  When inflation is high, bond yields have to rise to compensate investors for the loss of income. Someone who has the ability to determine whether an economic model is "robust" surely knows the interest rate/inflation relationship.

John Hinderacker at Powerline recently posted the following chart from the Republican Study Committee (which made its way around to a bunch of conservative sites): 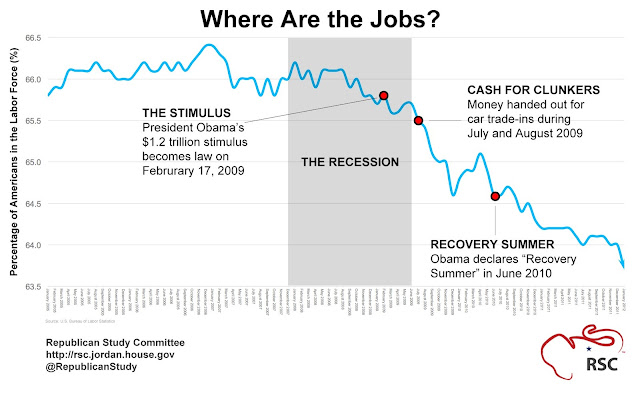 I could just as easily make this argument: 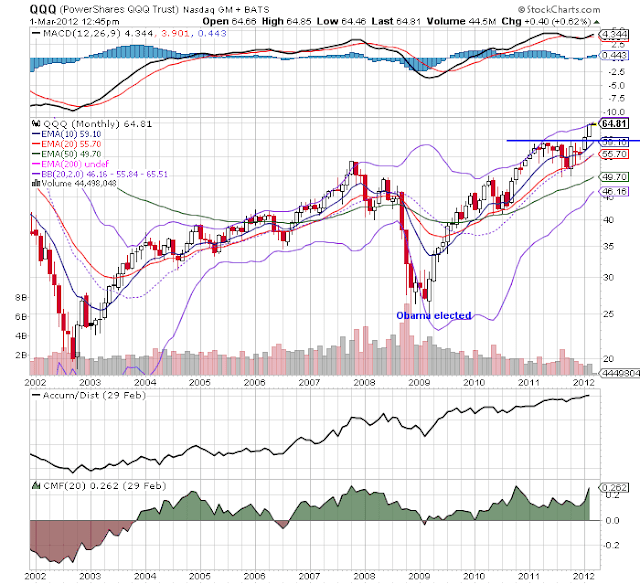 Or this one with total establishment jobs: 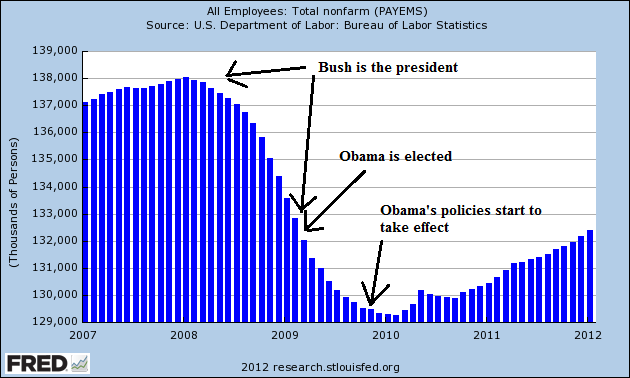 It took about 9-12 months for the stimulus to take effect.

Yet both Mr. Hindraker's statement and mine suffer from the same problem (which is classic in statistics): correlation does not mean causation.

What's even more telling is what's absent from Powerline's analysis -- there is a dearth of information explaining the effect of retiring baby-boomers on the LPR -- which the Chicago Fed did nicely over the last few months.   My guess is Mr. Hinderaker has absolutely no idea what the LPR really measures, probably never heard of it until the he saw that chart, has no idea about the how its calculated, can't name the survey from which its derived or the effects of an aging population on that calculation.

Then there is this: the left wants to think of itself as "champion of manufacturing."  Really? Then why has there been a complete dearth of writing about this chart: 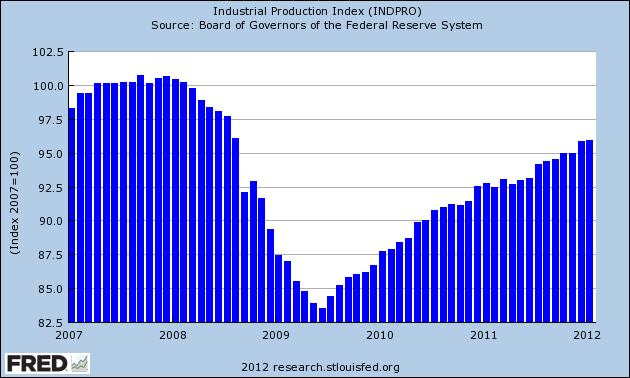 Manufacturing is one of the primary drivers of this expansion.  And I forgot to mention, the importance of exports as well: 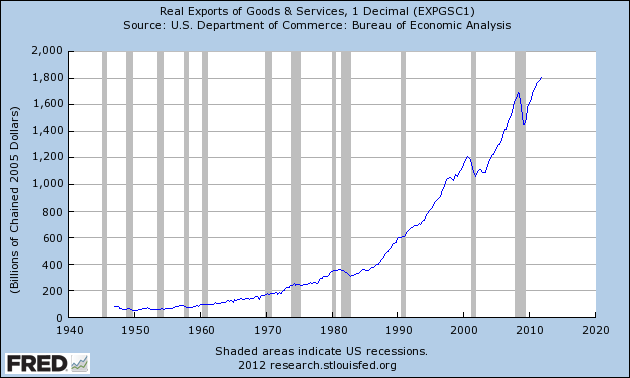 That's a record high for real exports. And yet, when it comes to the political left, they're absolutely silent on the issue, even though, according to most, we need to "become a net exporter again."  Hint -- we already are.

So, if you're a political blogger and you want to write about economics, please answer the following questions prior to writing on economics.

For the political right.

1.) During the 1950s, the highest marginal tax rate was over 90%.  In addition, Congress raised taxes to pay for the Korean War.  Yet, this decade was incredibly prosperous for the US economy with GDP growing at incredibly strong rates.  Why didn't this high rate of taxation cause a recession (in fact, why did the economy thrive) and why didn't it lead to people "going Galt?"

2.) The overall rate of taxation is currently near its lowest level in 60 years.  Why isn't this having a tremendously stimulative effect, as theorized by supply-side economists?

For the political left.

2.) In 2010. the world experienced a series of weather events that severely limited global good supplies.  In addition as countries such as India and China have increased their standard of living, demand has increased.  However, by 2012, world output of agricultural goods has increased thereby lowering cost pressures.  Please explain why this example does not indicate that a market based system is the most efficient way to allocate resources, nor the fact that demand and not speculation was the primary driver of prices.

3.) Please explain why the removal of corporate personhood would not lead to a complete shutdown of the US economy.

In case you were wondering, the preceding questions are basically "un-answerable" from each sides respective political position.  It's like the old Star Trek episode where Spock tells the computer to compute pi to the last digit or states, "I always lie; I am lying."  That's the point. Both sides have taken political positions which are inherently at odds with reality and economics.  In other words, their political desires trump economic analysis, making their economic analysis completely and utterly useless.

So, if you're a political blogger and you write about economics, please realize that you have absolutely no idea what you're talking about.  Really.  You don't -- not one clue.  Please -- in the name of all that is holy -- please stop.