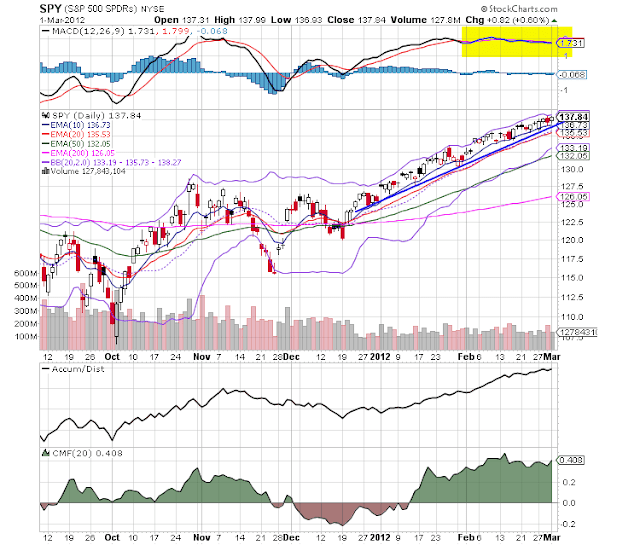 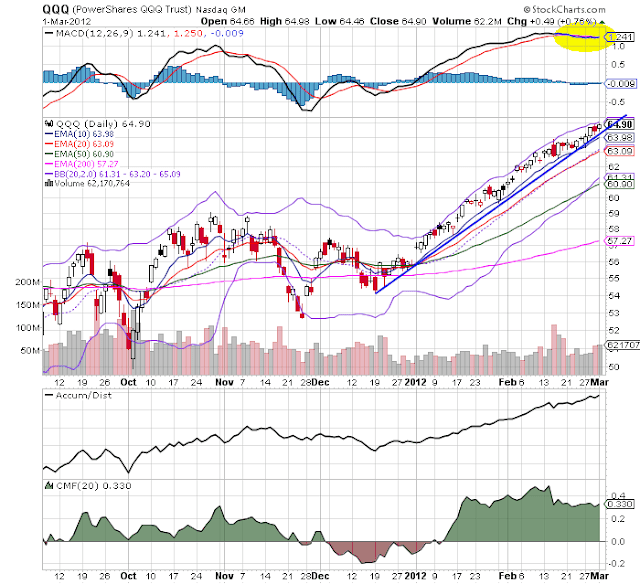 Both the QQQs and SPYs are still in an uptrend.  The volume indicators are still positive, as are the EMAs.  However, momentum is dropping, although not at an alarming rate. 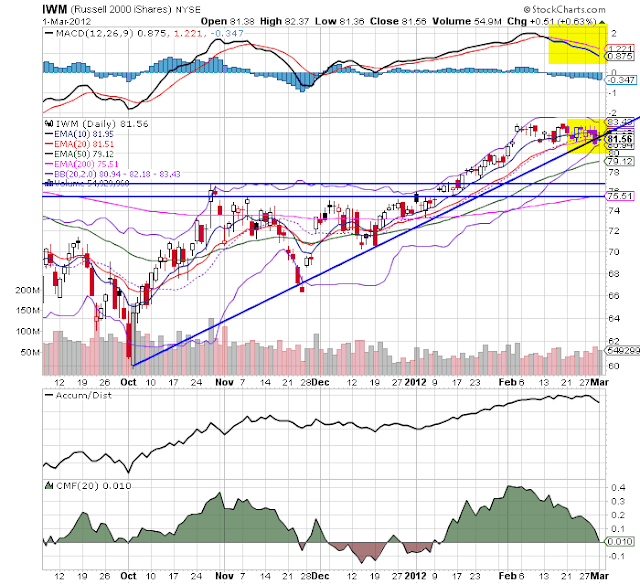 However, the IWMs are right at their trend line.  In addition, the MACD is dropping.  As this is the market with the highest risk profile, the levels are important.  Also, consider this chart in relation to the transports: 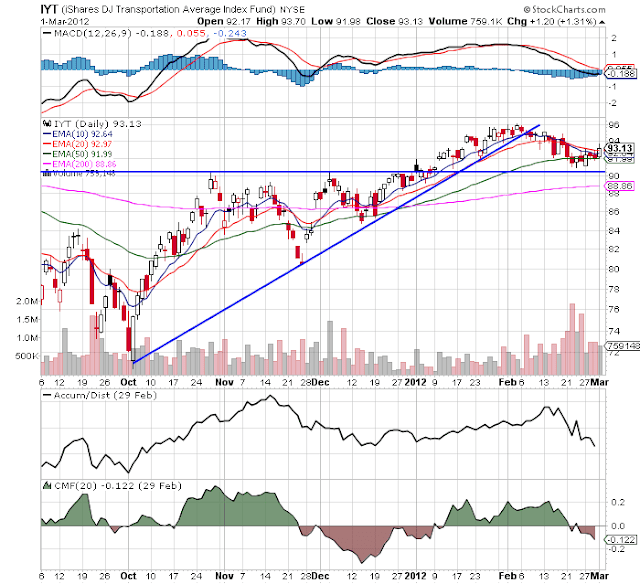 The transports broke trend near the beginning of February.  They've fallen since then, finding support at the 50 day EMA.  They've been rising with the EMA for a little more than a week.  Also note the drop in inflowing volume and the overall increased volume over the last few weeks.

As I stated on Monday, I think the stock averages are closer to a correction at this time.  The IWMs approaching their support add to that concern.  If they break support, my concerns will increase. 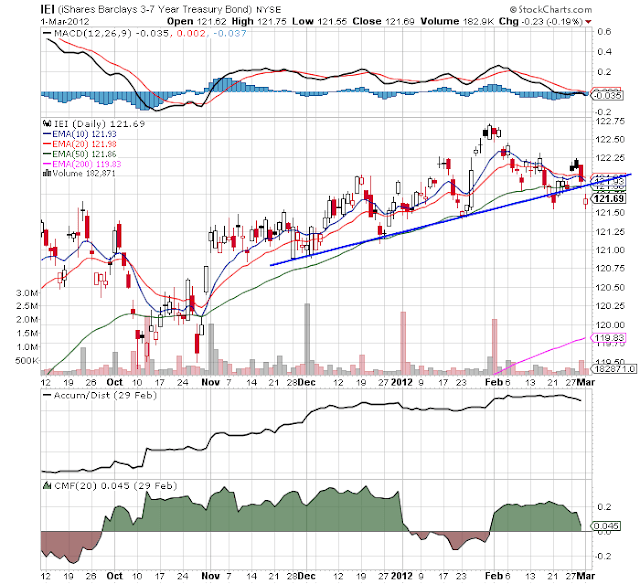 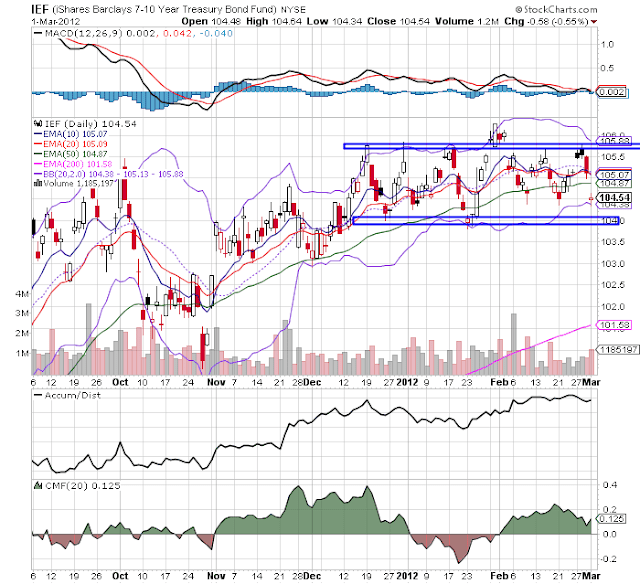 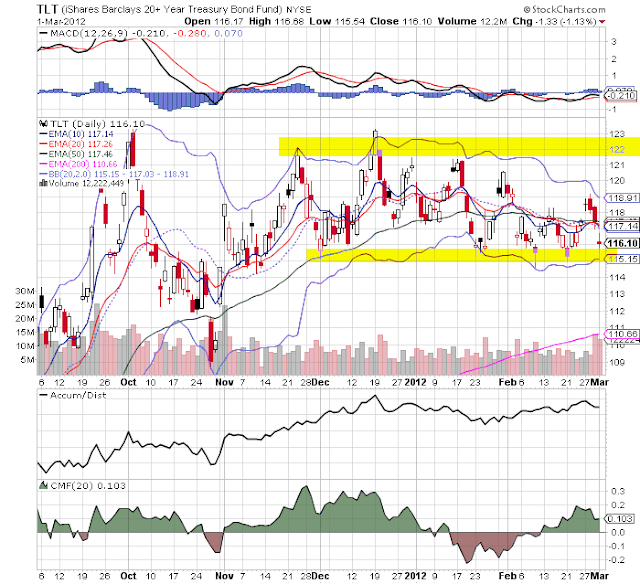 The treasury market may be abovut to change.  First, note the IEIs have broken support.  This is the 5-7 year area of the market.  However, the IEFs and TLT s are still in a trading range.  A move lower by either the IEF or TLT should provide more fuel for a stock rally. 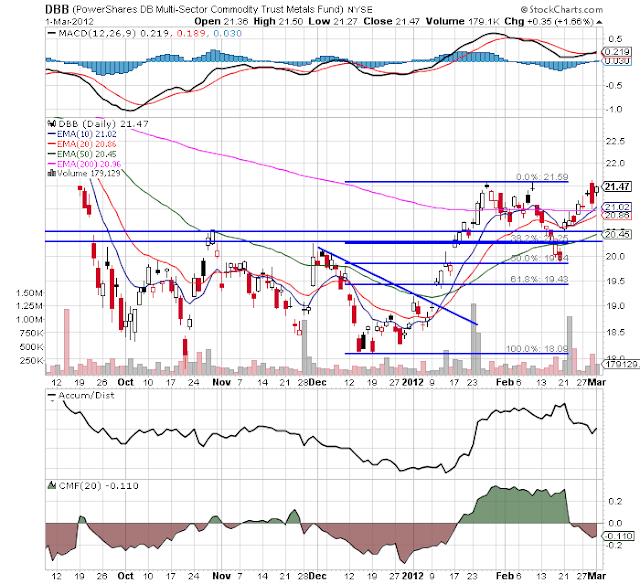 The industrial metals ETF has approached previous highs established in early February, but hasn't quite made it higher.  Prices are in a clear uptrend with EMA and MACD support.  However, the A/D and CMF are bearish. 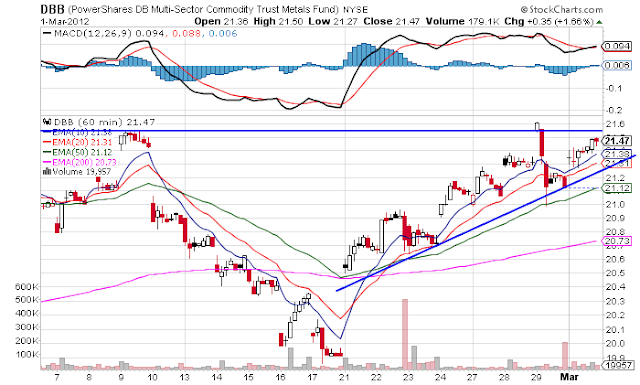 The 60 minute industrial metals charts shows prices are in a clear uptrend.  However, as I previously noted, the lack of follow-through in the early part of the move higher is a bit concerning (prices fell in the second have of trading for the February 21-25).

The above charts are sending interesting signals.  The IWMs are close to being the second equity index to move through a trend line support (with the transports being the first).  However, the IEIs trend break and the rally in industrial metals is encouraging news for the bulls.  It could be this is a situation where we have to think in multiple time frames: the equity indexes will correct in a disciplined manner over a 1-3 month time period, while we get encouraging/bullish developments in the treasury and industrial metals market that prevent too much of an equity sell-off.